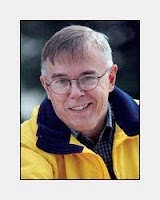 “All of the great forces that motivate people — love, sex, money, power of all sorts, including political power — can make people noble or venal, and the difference between doing the right thing and doing the wrong thing is often narrow and, in some ways, inexplicable.”

That’s one quote from the Q & A with Mike I’ll be running on Thursday, the day his third mystery is officially released by G. P. Dutnam’s.