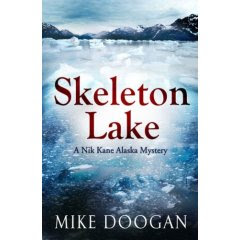 He is a former newspaperman, a current State Legislator, and a novelist with a third mystery released, as of August 14: Mike Doogan, thanks for taking part in our very first Q & A.
SKELETON LAKE : A NIK KANE ALASKA MYSTERY is a police procedural woven with three chronological strands, in the 1960s, 1980s, and today. In a starred review Publishers Weekly said, “Doogan … doesn’t miss a searing beat in this three-movement symphony of loss, guilt and revenge.”
Andromeda: Correct me if I’m wrong, Mike, but I think I heard that you are the type of writer who doesn’t believe in writer’s block. I’m sure your journalism training must have helped with that. What’s your writing schedule, how do you get started and stay on task?

Mike Doogan: I believe in writer’s block. I’ve just never had it. Yet. I start a novel with a character and a situation and go from there. I write first thing in the morning and try to write 1,000 words a day. I use a trick I think I stole from Hemingway: Always quit before you are completely finished with a scene or a thought so there’s something to get started with the next day. I write to find out what happens next, and because I’m naturally curious I don’t have a problem keeping at it until the story is finished.

A: Is there anything that does distract you? (Email? Websurfing? Political crises in the legislature?)

Mike Doogan: I learned to write in newsrooms, so I am very difficult to distract, even when the writing isn’t going well. I look at writing in several ways, but an important one is as my job. If I’m working on a book and haven’t written my 1,000 words that day, I feel like I’ve let myself — and the book — down. That I’ve been unprofessional.
A: Your book takes place in the 1960s, 1980s, and now. Did you conduct research for those period details, or work mostly from memory? I’m also curious to know what you think about Anchorage’s evolution in general.
Mike Doogan: I lived in Anchorage during the various times in the book, so the only research I did for SKELETON LAKE was to check my memory. I don’t know if you’ve ever done that, but it can be a humbling experience to find out that what you remember isn’t actually what happened. I found I had a pretty good general sense of the events in the book, and of the ways Anchorage has changed over time. Not surprisingly, the main character, Nik Kane, sees that evolution the same way I do: The city has become much better off materially, but worse off spiritually or culturally or whatever word you would use to describe the non-commercial life of an American city.
A: I think it’s so hard to see what is right in front of us. Did you find it challenging to write about places you know well?
Mike Doogan: I think my training as a reporter helps me here, because a reporter is always looking for new ways to describe the same old city council meeting or house fire. The trick in both kinds of writing is to use the telling detail, the bit of description that works to illustrate both the physical place and its spiritual or emotional or what have you condition. I’m still learning to do this, and will fuss as much — sometimes more — with the description of a building a character passes as I will with a bit of essential dialogue.

A: What are your mystery/literary influences?

Mike Doogan: As a reader, I’m an omnivore. My main influences are the classic American detective writers: Dashiell Hammett, Raymond Chandler, the MacDonalds — Ross and John D. — and Rex Stout. But I’ve also learned a lot from Hemingway, Steinbeck and George Orwell, among others. Not to mention movies and television, which have really helped me in figuring out how to stage scenes.

A: Understanding human behavior is so essential for a writer. Has working as a legislator taught you anything new or surprising about humans? Have politics influenced your writing in any particular ways you’d like to share?

Mike Doogan: I think working in politics has refined my sense that good people can do bad things and vice versa, that life is more about people striving to do the right thing and often failing than it is about people who are always heroes or always villains. All of the great forces that motivate people — love, sex, money, power of all sorts, including political power — can make people noble or venal, and the difference between doing the right thing and doing the wrong thing is often narrow and, in some ways, inexplicable. I’m not a complete relativist. I do believe in right and wrong. But after immersing myself in politics, I’m not as sure that I’m always right — or even that I always know what right is.

MIKE DOOGAN will be reading and signing at Title Wave on Thursday August 21 at 7 PM.