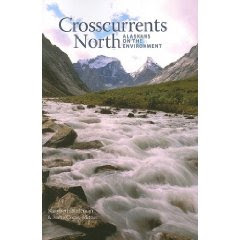 Anne Coray and Marybeth Holleman agreed to take turns answering questions about their environmentally-focused anthology, new from University of Alaska Press. They have lots of events set up, not only in Anchorage, but across the state. (See bottom for details.) As we all know, Alaska is big in the news right now. There couldn’t be a better time for looking at some of the environmental challenges facing the 49th state.

Andromeda: With other anthology titles out there, what gave you the idea to create a new Alaska anthology?

Anne: Even though there are a number of literary anthologies that include Alaska writers, none is written entirely by Alaskans and has an exclusively environmental focus. Given the recent primary election and the failures of two important ballot measures—#2, (which would have restricted predator control), and #4 (which would have ensured clean water standards for all large-scale mining operations such as Pebble), the necessity of hearing from Alaska’s “minority voices” is more important than ever. People in the Lower 48 need to know that there are longtime and even lifelong Alaskans who strongly object to what one newspaper reporter for the Seattle P-I called a “dig it-drill it-chop it mentality.”

Another driving force for this book was the fact that many “Alaska” anthologies include well-known writers such as Barry Lopez, Terry Tempest Williams, or Rick Bass, who are nationally recognized but are not residents of the state. We wanted to give voice to people who actually live here—or have, for a significant amount of time. So we included a ten-year residency requirement in our call for submissions.

Marybeth: The initial idea for the book was Anne’s. She contacted me through a mutual writing friend, and first thing I did was to read some of her poetry—where I was struck by some of the finest poetic evocations of Alaska’s environmental dilemmas I’d ever read. After that, what drew me to the book was the coincidences of things I love. First, I love poetry. While I’m primarily a nonfiction writer, it’s poetry I turn to when I’m in need of the deepest kind of insight, solace, awareness. There are poems that have, quite simply, saved my life. Second, I always loved the idea of a book of poetry AND essays, side by side. I think there’s a certain kind of magic in the way the two forms, poetry and prose, work together. The anthology is a kind of conversation between those two forms, a conversation about Alaska’s wild.

And third (but by no means least) I love Alaska—that is, its mountains and deltas, its seas and coasts, its astonishing diversity of wildlife. But in my nearly 25 years here, I have never felt represented by any elected official or government entity. In fact, in the last few years, it’s gotten much, much worse. As Anne points out, this recent primary election clearly shows that those of us who care deeply for this place, Alaska, have next to no voice in politics. But we do have a voice. A deep, resounding, vibrant voice. And I see this anthology as amplifying that voice.

Andromeda: Tell us about some of the better-known contributors to your book.

Anne: Some of the most recognized writers in this anthology are Nancy Lord, Richard Nelson, and Nick Jans. Nancy (who was just named Alaska Writer Laureate) has two pieces in the collection—an excerpt about commercial fishing, from her book GREEN ALASKA, and a new piece titled “The Experiment.” In the first piece, she contrasts two approaches to fishing—small scale versus large-scale, and takes a hard look at giant factory trawlers. “The Experiment” addresses the impact of global warming on the Homer landscape.

Richard Nelson’s piece is excerpted from THE ISLAND WITHIN. He describes walking through an old-growth timber clearcut in Southeast. He notes the disastrous results of this method of logging, and pleads for more environmentally sound and aesthetically pleasing practices for timber harvest.

Nick Jans also has two pieces. In “Crossing Paths” he expresses joy in watching wildlife in its natural environment. His other contribution, “Wolf Wars” gives a glimpse of the nitty-gritty, hands-on work he undertook in gathering signatures for a ballot measure that would have limited aerial wolf control.

Marybeth: We’ve got some well-recognized poets, too, including John Haines, Tom Sexton, and Peggy Shumaker. And, I’m extremely happy to be offering Walter Meganack’s “The Day the Water Died” to a larger audience. I can still remember the first time I heard that speech, months after the Exxon Valdez oil spill.

Andromeda: Can you also tell me about some “less-known” contributors and what they’ve had to say?

Anne: We are especially excited to bring to people’s attention the work of Joanna Wassillie and Joan Kane, both Alaska Native writers. Joanna is Inupiat, born in Nome and currently living in White Mountain. In her piece “That Which Sustains Us,” she celebrates the landscape of the Yukon-Kuskokwim Delta, stressing the importance of responsible garbage disposal and maintaining clean water.

Joan Kane, also Inupiat, is an amazing poet. In her work, she manages to fuse a love of place with an almost eerie distancing technique. The voice surreptitiously draws us in while simultaneously creating a sense of removal…it is a refreshing counter-style to much Alaska nature writing, which tends to be overtly celebratory and sometimes risks falling into the mundane.

We are excited about all the new voices. That’s one of the things I most enjoyed about this project: publishing the works of lesser-known contributors alongside well-known names. It’s a reminder of how much great writing there is out there, and how little of it escapes from what Marge Piercy called “the jagged/ bottleneck sewer of the industry.”

Andromeda: What was the biggest challenge in putting together this anthology?

Anne: The whole project was challenging, from start to finish. It’s been in the works for about ten years, and the work was exhausting. The first lesson was that publishers weren’t interested in too many poems, so the manuscript underwent several cuts as we received feedback from various editors. We are both happy that we managed to retain as many poems as we did for the finished book.

Marybeth: Yes, we were both absolutely committed to keeping the balance of poetry and essays as near even as possible. It remains a puzzle to me why so many publishers shy away from poetry. But it was a lesson, for me anyhow, in when to listen to publishers’ feedback and when to remain true to one’s intentions for the work, regardless of what publishers say.

Anne: Another huge challenge was the number of contributors. Keeping up correspondence with over forty writers over such a long period of time was difficult, to say the least. Then there were revisions to essays and bios, reviews of the changes made by the editor at the press in Fairbanks, agreeing on a cover image, etc. It seemed the emails would never stop.

Now that the book is in print, we find that the job of marketing is another huge challenge. As most authors and editors learn, books don’t sell themselves. So we have set up several readings around the state for promotional purposes.

Marybeth: This was also my first editing project. It’s given me great empathy for the work of an anthology editor. It was far more work than I could have ever imagined to read all the submissions, make the decisions, and keep up with all the correspondence. What was especially difficult for me was telling some very good writers that we couldn’t use their work. It’s helped me accept the rejection letters I get!

As for marketing, one thing that’s been rewarding is the way several contributors have stepped up and helped to organize readings in their neck of the woods. For example, essayist Dan Henry has organized a reading and discussion in Haines and in Skagway at the end of September.

Andromeda: Tell me one misconception you think Outside readers have about Alaska – and address how your anthology responds to that misconception.

Anne: I once had a famous poet tell me “Alaska isn’t exotic anymore, with the Internet and all. Write about Alaska things, but don’t stress being Alaskan.” As someone who was born and raised in this state, I felt that was kind of like telling me to cut off my right arm.

I lived in Seattle for six years; I’ve visited Hawaii, the Midwest, and the Rocky Mountain States; I’ve been to Europe and even Martinique. No, I’m not as “worldly” as some people, but I’ve seen enough of the world to realize that Alaska is different, and by extension, exotic. We really do have an incredible amount of unspoiled land up here and our human population is small. I think the misconception from a literary standpoint is that there is still a lot of provincial writing coming from Alaska. I believe our anthology demonstrates the quality of work that writers here can produce, while still writing about the “expected” topics—wildlife and landscape. I firmly believe that it’s not what you write about, it’s how it’s done.

Marybeth: Yes, Alaska IS different. I’ve been here nearly 25 years, and as I say in the introduction, Alaska still knocks me off my feet. This summer, my husband and I hiked up to Crow Pass. Now, I’ve hiked Crow Pass probably 20 times over the years. But there we were, like a couple of tourists from Tampa, in awe at those mountain goats perched on the rocks above the waterfall, at the lynx bolting up the mountain on the other side of the lake.

Plus, as Bill McKibben points out in the preface, Alaska is different because it’s not too late to save these vast wild places. Of course, now with the melting ice pack and drowning polar bears, it’s starting to feel too late, but I’ve got that “Galaxy Quest” motto in my head: Never give up, Never surrender.

The other big misconception about Alaska (heightened by current political events) is that Alaskans are as about environmentally aware as the wild-wild-west yahoos that gunned down hordes of buffalo and took nothing but their tongues. So it’s back to one of the driving forces for the book: to give voice. Again, while we may be a minority in the voting booth, we’re still a force for change.

Anne Coray is the author of BONE STRINGS, SOON THE WIND, and coauthor of LAKE CLARK NATIONAL PARK AND PRESERVE, forthcoming from the Alaska Geographic Association.

Marybeth Holleman is author of THE HEART OF THE SOUND: An Alaskan Paradise Found and Nearly Lost, and her work has appeared in numerous journals and anthologies, most recently THE FUTURE OF NATURE.

Saturday, September 13, 7 PM, Kellogg Farm, a remote campus of Alaska Pacific University. For directions log on to the web site, http://www.alaskapacific.edu/kellogg/group.php click on Bringing a Group, and scroll down.