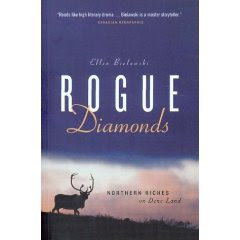 What difference does a border make? A big one, unfortunately. Five years ago, Alaska-born Ellen Bielawski published a major work of creative nonfiction about the diamond mines of Canada, based on her own experiences as a negotiator in the incredibly high-stakes minerals game.

Called ROGUE DIAMONDS: Northern Riches on Dene Land, it was published in 2003 by Canada’s Douglas and McIntyre and in 2004 by University of Washington Press.

The book, which blends an anthropologist’s perspective on resource issues with some intensely personal writing, received less attention in Alaska than it did in Canada.

Ellen also co-edited (with Bill Sherwonit and yours truly) an anthology called TRAVELERS’ TALES ALASKA , and we’ve frequently discussed the difficulty of getting Alaska books stocked in stores just across the border, in the Yukon, even though we share some of the same tourist traffic.

Ellen also authored a pocket-guide to Alaska prehistory called IN SEARCH OF ANCIENT ALASKA (Alaska Northwest Books, 2007), and she has reviewed books regularly for Edmonton Journal, Toronto Globe and Mail, and Orion Magazine. Thinking about those cross-border credentials – as well as this blog’s October Canada theme — I decided to ask her a few questions.

Andromeda: Give us a snapshot of Canada publishing, especially as it overlaps Alaska publishing. Do you get our books? Do we get yours?

Ellen: No. I am often astounded at how little writing from or about Canada’s North (the territories of Nunavut, Northwest Territories, Yukon) travels to Alaska, and vice versa. It seems we are all beholden to the ‘big city’ market of the south – and even there, books about the north or written by northerners, or both – aren’t well marketed, unless they are by an already-famous author who has turned his/her attention to the north.

Two examples: Seth Kantner’s ORDINARY WOLVES includes some of the best, most accurate depiction of contemporary northern, isolated communities that I’ve read. I heard about the book when my mother clipped the review from the Anchorage Daily News and sent it to me. Also, our TRAVELERS’ TALES ALASKA: you would think it would be marketed up and down the Alaska Highway in Canada. It is nowhere to be seen (I did a lot of poking into dark, dusty corners of convenience stores, lodges, gas stations, and souvenir stands while driving the highway again this summer. Nowhere.)

I guess, in this vein, it is not too inappropriate to plug my own work. With the Pebble Mine debate raging, my ROGUE DIAMONDS: NORTHERN RICHES ON DENE LAND could be quite useful and, dare I say, interesting to people. But it isn’t carried in Alaska (nor, at five years old, in Canada much either) even though my U.S. publisher is University of Washington Press.

As for a snapshot of Canadian publishing – oh, my! I recommend THE PERILOUS TRADE by Roy MacSkimming (McClelland and Stewart, 2003). Pressed to speak succinctly, I’d say that Canada parallels the U.S. in publishing patterns, trends, and certainly in problems (who reads these days? Who buys books? How do independent bookstores survive?) with the notable exception that the U.S. market is so much bigger (Canada has only 30 million people) that even regionally known writers in the states can sell more books than Canadian authors. Furthermore, we have two distinct reading/writing/publishing realms – English and French – and too rarely are we even aware of the other realm even within our bilingual, multicultural country. (Is there an Hispanic press/publisher/literature in the U.S. yet?)

I do believe that one of our strengths that is perhaps different from the U.S. is the sustained, excellent work of our small presses. Here the Canadian government’s grants in aid of publishing do really help sustain some diversity. The small presses are critical, I think, to getting new work and emerging authors into the light. I’m not sure the U.S. has a comparable network or shows a recognition of small publishing houses. On this note, let me recommend one of the best books I read this past summer: TROUBLED by R.M.Vaughn. Vaughn’s is not only a superb rendering of trauma and healing in poetry, but extremely helpful to my current work on the collateral damage to families when users of internet child pornography are charged and convicted. (No success selling this popular, light-hearted topic yet, either.)

Andromeda: Is there a different taste in books or literature where you live? For example, are there a few bestsellers or literary attention-getters in Canada right now that we aren’t hearing about?

Ellen: I was in Yukon all summer reading books, rather than about books, so I am happily ‘behind’ current attention-getters. But I expect that Giles Blunt is one of Canada’s unknown gems. He’s a wonderful writer of mysteries but if you read him you will also get Canada. He is superb in evoking setting. American readers will likely be familiar with Gallant, Munro, Atwood, Ondaatje, Mistry and Martel; look also for Blunt, Nikiforuk on environment and society – his recent book is PANDEMIC; Bush (Catherine, not any of the politicians) M.B. Fraser, Kostash, Solway, McGoogan, the Ferguson brothers…and many others. DO GLACIERS LISTEN? by Julie Cruikshank, while academic, is a must-read for anyone interested in Alaska, the north in general, and social or environmental change.

As for books that make it in both markets, one really good example is Ishmael Beah’s LONG WAY GONE (Douglas and McIntyre 2007) which made it on to both the New York Times and Toronto Globe and Mail’s bestseller lists, deservedly so. I’m triply pleased that this book did so well, first because it is the well-told, necessary truth of the life of a child soldier in Sierra Leone who survived to exercise his literary gift; secondly because I have huge respect for Scott McIntyre, leader of one of Canada’s outstanding mid-size publishing houses, and McIntyre brought Beah’s work to the attention of all North America; thirdly, because Beah’s success means that other Douglas and McIntyre authors, as I am, can continue to write with the hope of publishing since our house won’t go under as so many have. At least not this year.

Andromeda: Are Canadians facing some of the same trends, like reduced book reviewing?

Andromeda: You mentioned being part of a nonfiction writers’ cooperative of some kind. Is this something Canadians are doing that Alaskans should emulate?

Ellen: Myrna Kostash, a prolific Canadian author of diverse works whom you’ve probably never heard of, initiated the Canadian Non-Fiction Collective (CNFC) in 2004 by getting about 20 of us from western Canada to splurge on a discount weekend at the Banff Centre where we shared our work and discussed the particular difficulty of getting creative non-fiction – even any non-fiction other than academic work – publisher and review attention.

Myrna and others, while supporting our national group, The Writers’ Union of Canada, felt that non-fiction has never gotten its fair share of attention. Gradually, through an annual gathering and a busy list-serve, the group has drawn in many of the nationally known authors of non-fiction. I can’t say whether or not a similar entity could be useful to you nationally, but certainly it could be in Alaska.

One of the main advantages for us, I think, is that we can connect with each other. Most of us are isolated – many in small communities by choice or circumstance, others simply isolated by the writing/reading life – and outside of even the small ‘spotlight’ the writing/publishing world has to shine on our work. The CNFC connects us and allows us to share our craft, our research questions and technical problems, our successes etc. The list-serve has constant comment on the state of the art.

Andromeda: Has living in Canada changed you as a writer?

Ellen: No. But going back and forth between Alaska and Canada has. The main reason I came to Canada as a young Alaskan looking for a graduate program (none existed for me in Alaska at the time) was to escape the lower 48. I was looking for, and found, university programs that emphasized the north.

When I decided to get serious about writing, which wasn’t until 1997, I was living alternate years in Anchorage and Edmonton, and had peers and mentors in both U.S. and Canadian industries. Canada gave me a national context for my work about the north, because “the north” is a huge part of Canada’s identity and interest, even though most of the population lives within 100 miles of the U.S. border (and I don’t mean the border with Alaska).

Alaska and the U.S. industry reinforced my entrepreneurial side – if you are going to write, write; and expect to sell it yourself. In Canada, while the proportion of support to the arts is still small in comparison to that provided to sport (for example) I believe there is a wide-spread – if sometimes grudging – acceptance that our arts are essential to our cultural fabric. (If I walked six blocks to the mall, I’d probably get hit with a hard, cold reality check – remember, I’m biased as a reader and writer.) In the U.S., I think that writing is, like everything else, essentially driven by the market and the Horatio Alger model of success stories – the American dream, as it were. In Canada, it may be more true that writing and the arts in general are a necessary piece in our inclusivity.

Thank you for those border-crossing thoughts, Ellen!

Ellen Bielawski was born in Anchorage, and went to Canada for graduate school in 1975. She has raised two sons there and in Anchorage. After free-lance writing for several years, she decided she wasn’t talented nor energetic enough to put two sons through university on the proceeds (what proceeds?) of her writing, and was lucky enough to land a job at the University of Alberta. Nevertheless, Alaska and northern Canada are her passion and her home, as is reflected in her two books and numerous articles.

She also owns a cabin in the Yukon, where she intends to live and write as soon as her younger son is through university and she can leave her day job. Her elder son just completed a bachelors’ degree in commerce and will support her when she is old.