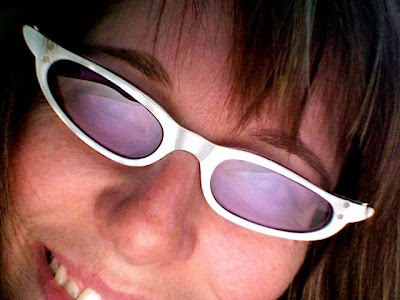 November is NaNoWriMo month, when aspiring writers are encouraged to embark upon the quest to write a novel in one month. I’ve talked about my own attempts to sneak past the internal censor, using contests and challenges like NaNoWriMo, which I think are fun and useful.
Arlitia Jones takes part in a similar — and if anything, more remarkable — challenge. It’s called Overnighters, and it involves plays written and performed in 24 hours. My assumption about poets is that they write slowly, carefully, painstakingly. So it intrigues me that someone like Arlitia has learned to write very fast, risking false starts, dead ends, and other professional hazards.

Andomeda: Arlitia, explain the Overnighters series to us and your participation in it. (I’m also linking here to to Dawson Moore’s website, which has further explanation.)

Arlitia Jones: Overnighters is adrenaline theatre, laced with a touch of caffeine and bratwurst with sauerkraut at midnight, which has become one of my rituals whenever I’m writing for it. As a playwright I’m given a topic, cast and director at let’s say, 8pm. I then go home and write for the next 12 hours. I return to the theatre at 8 am with a TYPED script in hand, enough copies for cast, director, producer and those wonderful heroes who sit in the booth and make all the cool sound and lighting gizmos work. They then have the next 12 hours to rehearse and put the show up for a fully produced performance that night.
It’s insanity. It’s a trainwreck sometimes, and other times it’s truth and beauty distilled for a fleeting moment. You never know which. And that’s what I love about it, that and the people involved. They’re the main reason I keep coming back.
I remember once staggering into the theatre one morning with my new script in hand (I’ve done Overnighters 13 or 14 times). I’d been up all night and as I walked into the building I met up with one of the actors who was just showing up, fully rested, to take a role in one of the shows. As we walked in together he asked how it went writing through the night and I said something like “oh, you know…” and he replied “Well, you writers got the easy part…” and I swore to myself by Aristophanese and all the sleep-gunk in my eyes that someday if I ever got him in my Overnighter cast I would punish him severely on stage by giving him the longest monologue in history, rife with polysyllabic, Latinate words and a complex braided syntax modeled after Karl Marx’s Manifesto or something, to be delivered while riding a pogo stick in a rhinoceros suit. Bounce, rhino, bounce.
This is all big talk. The producers would throttle me for writing in a rhinoceros suit and Dawson has actually forbidden me from ever-again writing monologues in my plays. I have a history. I admit it. However the pogo stick is still in play as far as I know. I’m waiting like a spider.

Andromeda: So how does a play get written that fast? Do you come with a partial plan and then fill it in?
Arlitia Jones: I really have no idea how I write a play that fast, and by that I mean I’m not really conscious of how it’s getting done while I’m doing it. I’m just doing. Which is to say writing. Just writing. Sometimes I’ll go into an Overnighter session with a question in the back of my mind. Something like “What if we just quit being nice to each other one day? What would that feel like?” I explored it with a character in a play, a store clerk who finally tells the world to go to hell rather than the requisite “have a nice day” which in the retail world is really a euphemism for “Thanks for spending your money.” The play, turned out wasn’t about meanness or niceness, but about my character finding the ability to actually say something meaningful or real in the world.

A lot of times in my plays I write from the images of my dreams. I wrote one of my favorite plays about fish because of a dream. I had no idea what my topic was going to be, but I had this image of fish in my head for days, vivid fish, colorful and graceful, they swirled in the atmosphere around my dream-self. Those fish were adamant to go on stage. Before I went to get my Overnighter topic that night I stopped by a local tropical fish store (Hey! does anyone remember the Pink ems?) and spent over an hour watching fish do what fish do in all their variety and beauty. It was an amazing approach to the process. I went in without a lick of language to guide, just a visual, but it was visual full of motion and intention. Fish have all kinds of postures, turns out. I wrote a play about a woman who has to leave her fish in her garden, the last beautiful thing she dies of old age or before the coming war wipes them out.

The most important thing for me really, in all my writing, is to get myself out of the way. I’ve learned every time that little voice comes on in my head that says “don’t write that, it’s stupid”, that’s when I’m really on to something. I say no to nothing. The stupidest ideas turn out to be the things that work for me. Who knows, that pogo stick idea could really turn into something. Maybe not, but it would be fun to try. When Dawson first asked me to write for Overnighters he phrased it by asking me “to come play.” I’ve hung onto that word: play. That’s what it is, for all of those who’ve ever asked me what’s going on inside my head. I’m grateful for it.

Andromeda: The heart of my question now: How does this contrast with your poetry-writing, and assuming that it does, how to do you turn off one writing style and turn on another? Any lessons for us about defeating the internal censor? Has Overnighters taught you anything or is it just a lot of frantic, creative fun?

Arlitia Jones: I’ve never believed in writer’s block. Overnighters has confirmed that belief. Try to write out of yourself into something that’s bigger than you. In terms of Overnighters, the writing right away feels bigger than myself because I hand it off to anywhere from 3-7 people in the morning and they go about the work of making it theirs, so they can then hand it off, so to speak, to an audience of sometimes a couple hundred people. It’s a living evolving piece of writing. All of those people are involved in making it happen.

When it comes to poetry, I’m solo with the poem. Absolute solitary confinement. This isn’t to say I don’t enjoy or sometimes crave sharing my poems with people, I do. But in the making of them, it’s just me. I’ve written hundreds and hundreds of poems, 99.9% of which will only be seen by me. These are the poems I jot down on scraps of paper and stuff in my pockets. I find them later in the lint screen of the dryer, falling apart and illegible except for a few words here and there like alder or sparkplug or whiz. They’re all that’s left and if I want I can resurrect these scraps of scraps and make up a new poem. Or I can let them go. I think when I let them go, the poems become like those dream fish swirling in the atmosphere around me.

Every play comes out of the poetry, comes because of the poetry. I sometimes think of dramatic writing as another poetic form, one made of pure dialogue, with a few stage directions, and if I’m lucky, a story. It’s thrilling in its immediacy. Writing a play is like writing what I call “fast poetry.” Strangely, it takes me longer to write a poem than it does most of my plays, even the full-lengths.

Andromeda: What about your non-Overnighter playwriting? What is your latest project?

Arlitia Jones: I’m currently working on a play about Lena Morrow Lewis, a socialist lecturer who came to Alaska alone in 1912 to try and organize the miners along the Yukon against the Guggenheims and the Alaska Syndicate. This play is part of Cyrano’s Theatre’s celebration for the state’s 50th anniversary next year. It will go up in March during Women’s History Month. It involves a lot of research and reading of old letters and microfiche to get at a sense of this very independent and powerful woman’s voice. I get lost for hours imagining and reading about Alaska in the early years of the last century. I’m also challenging myself with this play to write a kind of play I haven’t written before. So far it is a very non-linear, elliptical play that breaks all kinds of rules about time and space.
I also continue to work on a new poetry manuscript and a graphic novel-poetry hybrid thingamajig. I write it as it comes. I’ve given myself the deadline for finishing it: sometime before I die. The Jones’, my Jones’ are mostly long-lifers, so I might have a prayer, if I keep at it, of pulling something together in the end.
Arlitia Jones is also a UAA adjunct faculty member in the low-residency MFA program for creative writing and the literary arts.
Views: 9