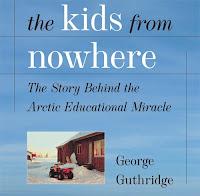 Yesterday’s post was about Hollywood coming after an Alaska writer’s novella. Now imagine the process in reverse, with a twist — a local reader (with lots of film experience) comes across an Alaska book, loves it enough to consider adapting it into a screenplay, and works hard to get it ready for Hollywood’s attention. Thanks to Deborah Schildt of Anchorage for answering my questions about this inspiring and still-evolving project.
How did The Kids From Nowhere come to your attention and what did you like about it? What happened next?

I’m an NPR loyalist and frequently work with it on in the background. Two years ago an author from rural Alaska was being interviewed about his book, The Kids From Nowhere. The author was George Guthridge. He was passionate and articulate when he spoke about his teaching experiences in Gambell, Alaska in the early 80’s. His book documents the remarkable scholastic achievements of a group of Gambell High School students who won national acclaim by taking first place in The Future Problem Solvers of America competition. The students broke many barriers and went on as adults to become leaders in their community.

What’s not to like about that story? The success of the students and their teacher is inspirational. It made me curious enough to want to fill in the blanks and know more. I went to Title Wave and found a copy of the book. I read it, underlining favorite passages and noting where it brought me to tears. I felt the story would make a great film, one that could be shot here and showcase Alaska. I loved that it was an academic success story from rural Alaska where kids exceed scholastic expectations, including their own. I liked that their teacher, George Guthridge devised a way to reach his students utilizing their cultural strengths and stayed dedicated to teaching them in the face of many obstacles.

Filmmakers today still struggle to reach their target audiences. Too often it seems the first concern is box office success, not the quality of the story or how it might impact young minds or inspire us to think about things from a different perspective. This story seemed like it could work on many levels. It’s a true story and that always has a certain magnetism. It takes place in a world few people ever think about let alone get to see. It has the potential to change the way we view indigenous people and their way of knowing the world.

I talked to Mary Katzke, a colleague I frequently collaborated with and asked her to read it. She too felt it had a great potential for a film. Mary contacted her agent for advice on option agreements. I contacted George and found out he was coming through Anchorage the following week. A week later, George, Mary and I sat down at a local restaurant in Spenard. We all spoke from the heart and reached a verbal agreement. We roughed out a timeframe and signed an option agreement. Mary and I would take George’s story and fit those 325 pages into a screenplay. That was in the spring of 2007.

How long did it take you to write the screenplay? Have you written other screenplays?

We started with an outline and a pitch. We reached out to the Rasmuson foundation and to Native Corporations for financial support. We wanted to set up a film workshop up in Nome, while we researched and developed the first draft of the screenplay. We contacted Zack Kanuck, the director and writer on “Fast Runner” and asked if he’d be interested. Mary and I had both worked with director Chris Eyre up in Barrow on a project and we solicited him as well. Both directors were interested in offering a film 101 workshop for those interested in working on the film and other film projects but Rasmuson and the Native Corporations turned us down.

We trudged forward. We wrote a treatment. It was fall of 2007. We attended a screenwriter’s workshop with Dave Hunsacker. Mary had written several scripts before and I, one other many years ago. In 2008 we pushed forward again, on a spring break down in Girdwood we roughed it out and started writing in earnest. It was rare we both had time at the same time to write together. Sometimes Mary wrote scenes and passed them back to me and sometimes the reverse. Finally, in August we made it to magic page number 120. We had a first draft. Since then lots has happened. We passed it around to trusted friends for critique and remarks. Our intention was to see what was working, what wasn’t and start a second pass.

Mary was offered a job with the State of Alaska at the Office of Economic Development as a film specialist and took it. Her free time has been significantly impacted. Our option with George ran out this past fall. We showed him our first draft and he started combing through with comments.

In January, George and I started co-writing on the second draft. It’s roughed out. Our intent is to edit and refine through March. Our hope is to get the second draft out for comment and start a second push. We believe in its potential. Now that Alaska has a film incentive program in the works it’s certainly timely to get it out there. Thanks to Sarah Palin, Alaska is in peoples’ minds now more than ever.

What has to happen for it to get produced?

We need to finish the second draft final edit and polish. We need to get it into circulation with producers, directors and talent that would be interested in taking it on.

What is your film background and how do you pay the bills? Is it possible to make a fulltime income as a filmmaker or screenwriter here?

I’ve worked in the film industry for the past 25 years. My first 8 were spent in feature film production in Los Angeles. I run a small film production services company here in Anchorage. To survive and pay the bills in Alaska while working in film, you have to wear many hats. I work as a local producer/fixer, location scout and manager, I work as a casting director, an art director, an editor – those are the things that pay the bills. I’d like to believe it’s possible to make a living doing what you’re passionate about, if that’s writing screenplays then yes, if they’re well written any screenplay should have potential in today’s market. It always starts with a story, a good story, an inspirational story, a story well told.

8 thoughts on “Adapting “The Kids from Nowhere” : Interview with Deborah Schildt”