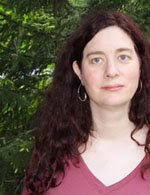 School’s out, giving poet Erin Hollowell, also a secondary teacher in Cordova, a chance to weigh in on the challenges of juggling writing with a busy day job.

When I called my father to tell him that I was switching my undergraduate major from Biomedical Engineering to English he remarked, “And how are you going to make a living?” If only I had known then about the myriad options for English majors, the unlimited prospects for those who have learned to craft language and extract meaning from text. But at the time, all I could do was stammer back that I guessed I’d be a teacher.

Twenty-two years later and I’m still teaching. In between, though, I’ve worked for slick multimedia firms in NYC and large software companies in San Francisco; for a while I wove rugs for a living, sold books, peddled them at the public library and was an event director for a small-town arts council. Throughout all of it, I’ve been a writer. When I told my father I wanted to change my major, it was because I wanted to learn to be a poet. I just wasn’t brave enough to say that I guessed I’d be a poet.

Teaching, especially in Alaska at the secondary level, is a particularly demanding task. To balance writing with teaching takes an iron will. None of the writers I know really think that you could do all of your writing on summer vacation when freed of the constraints of teaching. (I guess teachers shouldn’t admit to the amount of prep time they spend each summer on the upcoming school year). I suspect that many of the ways that I keep writing are the same as the writer/accountant or the writer/waitress.

A steadfast commitment. Having a strict dedication to your own writing is absolutely essential. Some folks have this inherently. For me, it took going back to school for my MFA before I could muster up the real commitment that writing takes. Before that, it was too easy to spend time correcting papers or creating spiffy lesson plans. If I wrote a poem, it was because I was inspired, not because I was really working on it. However, the Low-Residency MFA program that I attended made me prioritize my own writing. After all, I was spending good money on it, and folks were holding me to a deadline. Lots of them.

Let me be honest, teaching in small-town or bush Alaska is a time-consuming proposition. Currently, I teach eighth grade and tenth grade English Language Arts, AP Language and Composition (swapping on alternating years with World Literature), and Contemporary Literature. Oh, and the Yearbook/Journalism class. Yes, you read that correctly, five preps and a straight seven period day. I also am the Student Council adviser. I have roughly 130 students for whom I correct and grade, at the minimum, three assignments each week. Between creating lesson plans, grading papers and chaperoning after-school activities, there’s not a lot time left for writing. Hence, I am fiercely protective of the time that I commit each day. To be honest, it’s only an hour each evening, but it is always one hour. I read poetry and write something, even if it isn’t fabulous or finished or even recognizable as poetry.

In addition, I have changed the way that I think of myself. I used to think of myself as a teacher (or librarian or bookseller) who wrote poetry. Now I think of myself as a writer who is currently teaching. It may seem like semantics but the way we define ourselves in the world teaches people how to treat us. If I emphasize my writer self to the outside world, then I make room for writing in my inside world. Instead of spending every spare moment thinking about lesson plans, I am paying attention to what’s going on around me so that I have more fodder for poetry.

My writing life feeds my teaching. I write alongside my students and I let them watch me as I revise and edit my work. Instead of being the sage who imparts wisdom, I show them that a writer works hard at it. I demonstrate for them the techniques that I’m learning, and we all try to create a community of writers. Suddenly, I’m not the one who fixes up their writing, they are. I let them know that I don’t always know exactly what to write, or how to start, or even end for that matter. By emphasizing my life as a writer and all it entails, I give them permission to be writers as well. Writers don’t live in some magic world someplace else. They can look like a bedraggled English teacher on a Monday morning.

I had to give up the idea that I would publish a book and be on Oprah’s show. The writing life, it isn’t as glamorous as all that. But by acknowledging my writing as an essential part of my life, I’ve been able to make room for it along with my job as a teacher. Not easily, not without some sacrifices on all sides. But then again, does any writer have it easy? And if so, what on earth do they write about?

2 thoughts on “Make Room for Writing”