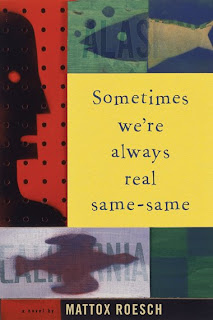 We caught up with Alaskan author Mattox Roesch just as he returned to Unalakleet after touring with his first novel, Sometimes We’re Always Real Same-Same. Here he talks about sincere irony, safe vacuums, the value of rejections, moving out of the “dark shadows of unconsciousness,” and a publisher that feels like the real deal.

I love your title, capturing some of the wonderful ironies of what we used to call (and maybe this is no longer politically correct) “village English.” In what ways does it represent the essence of your book?

Thank you! I still love the title, which is a good thing, and not always the case with titles. Although, the funny thing about going with a slightly nonsensical title is that I’ve worked all these years to finally answer the what do you do for a living question, and now, when I say I’ve written a book and tell them the title, I sometimes get a blank stare. It’s a similar to the blank stare I would get when I used to say, “I’m writing a book.”

Anyway, I fell in love with the regional slang through my wife and her friends. Slang is one of those things that can conjure up community and keep people connected. I think there is a reason that ‘language’ is used as a euphemism for ‘understanding’ — language is way more than communication.

Specifically, the irony of pairing ‘sometimes’ with ‘always’ (and even ‘never’) is beautiful. I’m a big fan of embracing paradox, and lexical paradoxes are as dangerous and humorous as a person’s intellectual and spiritual paradoxes. The reason I feel the irony within the title represents the irony in the novel is because they are both meant to be sincere. I tried to stay away from cynical irony because the characters don’t jive with that aesthetic. A real world example of this might be when a kid comes up to me on the street and says, “Man, Matt, you always never play games anymore.” The use of ‘always never’ is sincere. The irony arises from the intended meaning (you really don’t do this) clashing with the literal meaning (frequently rarely?). I hoped, throughout the novel, to reflect this sincere irony. And I think this is especially important with first person narration. If the narrator’s intended meaning of what he says is exactly the same as the literal meaning of what he says, the character is flat and unreal, and the author is insulting the reader’s intelligence. Nobody is perfectly articulate and self-aware (especially my narrator), and irony is one place where this dichotomy is revealed.

Tell us about your Alaska experience. What brought you to Unalakleet? How long have you been there? What were your initial impressions and how have they changed?

In 2005 I married into a huge Unalakleet family. I had only been coming out to western Alaska for three years before then (and hadn’t spent any time anywhere else in Alaska). But since my wife had grown up in Unk — and because she loved it — I had a unique relationship to her village. Dating/engaged/married couples have to assimilate into each other’s lives, and her home is an enormous part of who she is, especially while we were living in Minneapolis. So that was how I started moving to Unalakleet, years before we actually moved.

And even back when I first visited, I didn’t exactly get treated like a tourist. Sure, I got the tour of town and the names of the hills and rivers, but I also was handed an ulu and an axe and a shovel and expected to join in on whatever work was being done.

My initial impression was that summer in Unalakleet lasted forever. And it does, while it’s summer, but during the other nine months it feels fleeting and distant. Summer feels like the weekend, and the rest of the year is what we have to put up with in order to be blessed with that weekend.

I was also drawn to the village’s tight-knit sense of community, raised as I was in a tight family. But my appreciation for community deepened after living here for a couple years. In Minneapolis I had a tendency to only socialize with like-minded people, and in a way, live in safe vacuum. But in a relatively isolated community of 750, one can’t afford to only interact with like-minded people, because there might only be one, or two, or no one who shares our ideas. And when we commune with folks who don’t see the world exactly the same way as we do, I think we become better people. If we had every type of human being as a close friend or neighbor that we depended on and shared life with, then bigotry would disappear.

Did you struggle at all with setting your story in a culture that’s not your own? Do you have a sense of how it will be locally received?

There has been so much wonderful support from the community. I can only speak for Unalakleet (and even then, there are certainly differing opinions within town), but my experience has been that as long I am here and helping to make our home a better place, then I am welcomed as a part of that place.

I was certainly worried that the content of novel would be upsetting to some folks. And I’m sure it is (or would be) to some. Go-boy has an arsenal of theologies that go against mainstream Christianity, and the narrator — an ex-gangbanger — is still living with one foot in his L.A. world. But no mobs brandishing torches have knocked on my door. I think I was being a little overly anxious (rookie novelist mistake, no doubt!). Readers are savvy, especially those who live in Unalakleet.

In terms of me — a white guy from the outside — telling a story set in a predominately Native Alaskan village, I really stressed about it, ethically. I kept following the characters and the story as I drafted — because I couldn’t stop writing it — but I wasn’t sure if the whole writer/story situation was okay. And I’m sure there are some people who don’t think it’s okay. But my wife encouraged me to stop worrying. She pointed out that it was a story about an outsider moving to Unalakleet. And, in many ways, it is simply a story that takes place in rural Alaska. Yet that excuse only went so far, because the novel is full of modern-day Unalakleet culture, which, like most cultures, is wholly linked to its past culture. The thing that eventually made me confident was something the author Sigrid Nunez told me: ‘just get it right.’ Get the story/village/culture right.

And the truth about Unalakleet is that it’s a community full different people with a huge range of experiences. The whole concept of ‘same-same’ aside, there is no singular Unalakleet awareness. Everyone is different. And that’s why it’s so frustrating when the general public only pays attention to statistical information — like the high rates of alcoholism and suicide in rural Alaska — because there are hundreds of people in each little village who aren’t drinking and who aren’t suicidal. My wife discovered a study that reported that Native Americans/Alaskans have the highest rate of alcohol abstinence of any race within the United States. That’s an exceptionally relevant fact. And even though the realities of alcohol and suicide are present in my novel, I believe there are a plethora of other experiences brought to life.

Now that the book is published, I feel my confidence in telling this story was well-founded. Just an hour ago, as I was walking down Main Road with my wife and daughter, a prominent member of the community stopped alongside us and told me how much he and his three kids appreciated the novel. All the good reviews aside, it’s his opinion — and the other local opinions — that personally matter to me, because we all go on living our daily lives together.

How did your book find its home with Unbridled Books? What do you like about their vision and philosophy?

I published the chapter “Go at Shaktoolik” as a story in The Missouri Review a couple years ago. One of Unbridled’s editors contacted me and asked if that was part of a larger work. It was, but it wasn’t yet complete, so almost two years later my agent sent him the final manuscript, and it was a good fit.

Unbridled is the real deal, plain and simple. They only publish fiction that they truly believe in, and I can attest to that. I’ve felt completely supported in my rookie journey through the publishing experience. All their publicists get their hands dirty and make things happen. I often get the indie publisher vs. major publisher compare/contrast question, and all I can say is that indie is the new major. I’ve heard versions of this same sentiment everywhere. Unbridled is stable, and because they take the time to nurture their titles/authors, they have a viability that seems rare in the modern publishing world.

Portions of the book grew from short stories. At what point did you realize that there was a novel looming, and how did you go about bringing it together?

I started with stories because, at the time, that was the only way I knew how to tell a story. As I wrote one story, another began knocking on the door, then nagging from another room, until it was right there with me, and I was putting it into words.

The initial process of writing stories became a way for me to introduce this voice and these characters to the literary community, submitting to journals and magazines (with roughly 70 rejections before “Humpies” found a home with AGNI). That conversation was invaluable. There are so many great editors/readers out there. Getting stories ready for that world taught me how to turn the internal self-editor on and off. It’s important to shut that nagging editor off while drafting. But it’s also important to turn it on and ask that left-brained version of myself what do you think of this? Usually that self laughed. But that was also the self who told the weepy, rejected artist buck up, make some changes, it’s not that important.
This process also taught me what I don’t want to do the next time around. But that’s a whole other question.

You’ve embarked on your first book tour. How have you found that experience?

Many people warned me against doing a book tour. I’ve heard that a lot of authors refuse to tour. But, man, it was wonderful. Of course, I spent a good part of my twenties touring with a DIY rock band — sleeping in a van and on moldy floors and playing shows for three people — so I’ve been thoroughly trained in expecting the worst from tours. But the thing about it that I loved — the thing that can’t be done in the virtual world — is meeting booksellers and booklovers in person. Because the question who are you writing for? was able to move out of the dark basement and into the bright airy world of independent bookstores full of well-groomed and well-read people. This was both my process and the manuscript’s process. The story started in the dark shadows of unconsciousness, and slowly, through edits and rewrites, through second and third and fourteenth readers, through finding a publisher and working with an editor and getting that first round of reviews, it finally and officially became alive in the world.