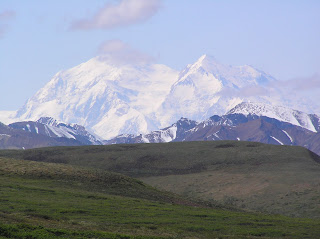 “As the road crested over its top everything shimmered, the whole landscape gold and scintillating . . .Physical and temporal boundaries dissolved, and it felt like I’d reached a culmination, as if some crucial gap in my life had been filled.” So writes our featured author, John Morgan, of a culminating moment as the first writer in residence at Denali National Park. (For Part One, see yesterday’s post.)

Day 6. Nancy and Ben [our son] visiting. We woke up to heavy rain, low clouds and not much prospect for a change in the weather, but hey—this is the park—so we drove west, hoping for something different, and we got it—snow. Heading over Polychrome, rain turned to sleet and we could see the snow-level on the mountains dropping. The road wasn’t bad, though, and we continued out to Eielson, seeing along the way a mother grizzly playing in the snow with her single cub. They wrestled and rolled around in the frosty white stuff, delighted with each other and turned on by the snow.

At Eielson we walked into a snowball fight involving some visiting kids and the bus dispatcher. On the way back, we hiked near Stony Creek and came on a fresh-looking pile of bear scat and, nearby, a stretch of ripped up ground where the bear went after a ground squirrel. Seeing a few square yards of earth gouged and torn apart, big rocks tossed aside like tennis balls—a thorough thrashing of the region—gives a new and different perspective (different from the playful wrestling of a mother and cub) on the wild power and ferocity of a bear.

Day 7. We hiked to Tattler Creek, noting wildflowers and ringing bear-bells for bears—not to attract them, of course. In a rugged side-canyon, I scouted for dinosaur footprints (which have been found here) and saw many possible maybes, but no definite prints.

We crossed the stream and climbed to an open spot where we ate lunch overseen by a dozen Dall sheep. On the way back, we had to make another crossing of Tattler Creek. Following Nancy, I noticed that one of the rocks she stepped on had shifted slightly, so I was careful in placing a foot on it, but it shifted again and threw me off balance. When I asked her if I could write that “I fell gracefully into the stream,” she replied, “You can say that if you like, but it would be a lie!”

On my hands and knees in four inches of icy water, I took stock. A few minor scrapes, I thought. But something was wrong with my left pinky. It looked like a miniature hacksaw, with the middle section out of line with the rest. But as we were hiking out, figuring I would have to visit the clinic in Healy, I fiddled with the joint and it snapped into place.

Driving back to the cabin, Mt. McKinley was beautifully out at the far end of Sable Pass. It towered over the nearby hills, at a spot I’d never seen it before, brilliantly white, both summits sharp and clear for the first time on this trip

Day 8. Nancy and Ben packed up to leave and we drove to Teklanika and hiked through the woods and along the gravel bars of the river, seeing moose sign and the tracks of (possibly) a wolf. We ate our lunch out on a bar and then, driving to the park entrance, saw a couple of large-shouldered moose crossing the road just in front of us. I dropped Nancy and Ben at their car, gassed up and drove back to the cabin.

Day 9. As I headed out to North Face Lodge to give a reading, a fox preceded me up the Polychrome switchbacks. Red, smudged with black along its sides and rather scrawny—not the handsomest of foxes—it rubbed its muzzle along a scrap of something (a former meal perhaps) at the side of the road, not paying much attention to the poet following impatiently on its tail.

Then approaching the overlook, something amazing! Sun shearing through low clouds transformed the view to glitter. As the road crested over its top everything shimmered, the whole landscape gold and scintillating. I checked my shaky hands on the steering wheel, not wanting to swerve over the edge, but feeling in my crazy euphoria that if I did, nothing very bad would happen. Physical and temporal boundaries dissolved, and it felt like I’d reached a culmination, as if some crucial gap in my life had been filled. The unreal dazzling vision lasted for ten minutes or so, but it reverberated throughout the day and remains unforgettable.

At Thoroughfare Pass, where I’d seen the grizzly family (brown cubs, blond mother) on several earlier drives, and expected to see them again, instead a herd of caribou, more than 100 of them, grazed and moved gradually west toward Eielson. Lots of young ones, four of them lines up in a game of “follow the leader,” their herd instinct already kicking in.

The reading at North Face went very well, with a relaxed atmosphere and a large receptive audience. And afterwards, driving back to the cabin late, I shouted with surprise at the sight of a double rainbow shooting up from the base of Denali—brilliant colors, with the muscular shoulders of the mountain behind it.

Day 10. At an early hour, before I was properly into the day, I heard a car door slam. Some people were talking in what sounded like a foreign language. I unlatched the door and there stood two men in slacks and crewneck sweaters.

When I said, “Hello?” they glanced at each other, apparently unsure how to respond. One of them grinned sheepishly and the other muttered, “Murie…Murie…”

Finally, a third person, white bearded and wearing wire-rimmed glasses, stepped forward and explained, “These are two wolf specialists from Spain. I thought they should see the cabin.”

“Oh, sure,” I said, and at that the two Spaniards rushed past me and scurried about, excitedly taking in the bunk-bed, fridge and stove and noting my papers, books, and clothing scattered about, exclaiming, “Murie! Murie!” And when they departed, I felt I had served the cause of international wolf studies, though, sad to say, I haven’t seen a single wolf during this particular visit to the park.

Day 11. My last morning in the cabin, I went down to the river to have a look around and while I was casually staring at the fast-flowing silty channel, a head poked up mid-stream. What kind of head? I couldn’t tell. It was gone too quickly. Had it been a fish, trying to get its bearings? A river otter? Maybe it was just a trick of light on the riffles. Had I really seen anything at all?

But then in almost the exact same place, the head poked up again, this time followed by the long neck and mottled body of a duck—and instantly it was paddling and flapping desperately toward the bank, and was almost about to make it, when it disappeared again under the thick gray current. 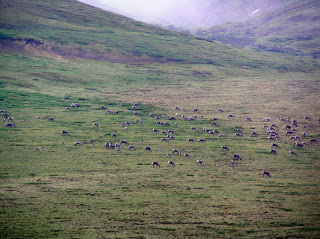