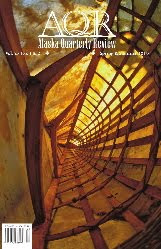 As a new issue of Alaska Quarterly Review hits the shelves, we caught up with editor Ron Spatz to discover how this esteemed journal has earned and maintained its reputation as one of the nation’s finest literary publications.

How long have you been with AQR?

I’ve been with Alaska Quarterly Review from its inception. It has been a 30-year investment of passion and creative energy since first pitching the idea of founding this literary journal to a University of Alaska Anchorage colleague — if we count the time needed to publish the first issue in fall 1982. Alaska Quarterly Review will celebrate its 28th anniversary of continuous publication with the 2010 spring and fall editions.

What changes have you noted during your tenure – both for AQR in particular and for literary journals in general?

Alaska Quarterly Review has been blessed with long-term, dedicated staff members. The current senior editorial team includes Stephanie Cole who has been with us since 1986 and Robert Clark since 1992. Other talented people have come and gone over the years, including many volunteers and students, some of whom received academic credit and/or graduate assistantships. The elimination of UAA’s on-campus, full residency MFA program in Creative Writing had a significant impact; meaningful graduate student involvement with the magazine was no longer possible, and we are still adjusting to that change.

Since 1982, our feature sections have evolved. We phased out the literary criticism and philosophy sections and added literary nonfiction, photo essays, and drama features to the mix of our eclectic fiction and poetry sections. We also made modest changes in the look of the magazine. We re-designed the logo for the fall/ winter issue in 1993, and went to all color covers in fall/winter 2000.

On a global perspective, literary publishing has always been a tough market. The periodical segment is especially challenging, and continues more so every year. The advent of the Internet and rapid development of digital technologies has created a changing publishing paradigm and all literary print journals have become more vulnerable. To our disappointment, some proponents of e-zines have taken the view that print journals are now irrelevant. That was the case involving the recent demise of the wonderful 40-year-old literary journal TriQuarterly when the Northwestern University librarian to whom the magazine reported pulled the plug. Writers know better though; they recognize that print and on-line publishing are markedly different from each other and that there is abiding and inherent value (and interest) in the print format.

Despite all of the challenges and market pressure, the number of submissions from new and emerging writers for publication in Alaska Quarterly Review is as robust as ever and continues to grow. During the reading period from August through May, USPS mail pours in with unsolicited manuscripts– the lion’s share from North America, but also from every corner of the world. Some days we literally cannot get through sorting the mail.

What distinguishes AQR from other literary journals?

Alaska Quarterly Review’s character and national/international focus separate it from the pack. AQR is Alaska’s flagship literary magazine. It is informed by Alaska – the place and people and cultural traditions. It has connected Alaska to the larger literary world for 28 years.

AQR has earned high marks in the literary community. How has the journal established such a fine reputation?

We cast a wide net. We recently received notice that one of our short stories was selected for The Best American Mystery Stories 2010

and another poem appears in the 2009 Pushcart Prize: The Best of the Small Presses

distributed by W.W. Norton. One AQR story is cited among the distinguished stories of the year in The Best American Short Stories 2009

and a featured author in that collection published her very first story ever in Alaska Quarterly Review. AQR has served as a literary springboard for many authors over the years.

Part of that good reputation is that over time Alaska Quarterly Review has had representation in every major national awards anthology including Prize Stories: The O. Henry Awards, The Best American Essays, The Best Creative Nonfiction and so forth. AQR’s work has also been featured or cited in such national media showcases as Poetry Daily, PopMatters, Garrison Keilor’s Writer’s Almanac and publications such as Poets & Writers, Writer’s Digest, Library Journal, Literary Magazine Review, The Washington Post Book World, and the Sunday New York Times. Internationally, AQR has been highlighted by the BBC and the Australian Broadcasting Corporation.

If I had to isolate what we’ve done well to earn this acclaim, I’d reduce it to this: Consistency and quality of the editorial vision; Staying true to the promise to promote new and emerging writers; publishing eclectic, consequential literary work; resisting the pressure to become a provincial/regional publication. The latter is a double edge sword, however. Although it earns Alaska Quarterly Review respect and credibility nationally, it does not always translate into support (in the fullest sense of the word) at home.

You’re a writer, an editor, and a teacher of writing. How does each of those roles enrich and inform the others?

They are different facets of the same gem. Each can be a lens to a broader understanding of the creative process and refining the products of that process. Reading widely is also key. To have a sense of the hallmarks is important to test and grow one’s ideas and vision.

Describe the type of writing that generates excitement among your senior readers and editorial staff. In other words, if one of us wanted to wow you with a submission, how would we do it?

This question comes up frequently and what I usually say is we look for the experiential and revelatory qualities of the work. We will advance a piece that may be less polished or stylistically sophisticated, if it engages and surprises. We are looking for voices our readers do not know, fresh voices that may not always be reflected in the dominant culture and have something important to convey. For the editor, and, later for the reader of the published work, the joy in reading such a work is in discovering something true.

What would you like writers to know about the submissions and selection process at AQR?

Before a writer submits a manuscript to Alaska Quarterly Review (or to any journal for that matter), it is helpful to read selections of work previously published by the magazine. This gives the writer an idea of the range of works that the editors have found compelling and will help the writer decide whether their work is a reasonable match for that journal.

Useful notes from our submission guidelines:

(1) Unsolicited manuscripts are read between August 15 and May 15.

(2) Although we respond to e-mail queries, we do not review electronic submissions.

(3) We are comfortable reviewing simultaneous submissions providing that they are identified as such in the cover letter and that we are notified immediately if they are accepted elsewhere.

Finally, whether or not we feel the work is right for Alaska Quarterly Review, we take each writer’s submission seriously; we are honored to have the opportunity to consider their work.