First, this shout-out to Alaska writers who have had recent good news and will be needing to prepare for a book launch in the next year or two. You know who you are! Read this helpful post from my blogging friend Moonrat about how to plan your awesome book launch event, and make sure you invite us when the time is right.

Now, if I can get personal for the first time in a while: It’s been an amazingly crazy, productive, exhausting and fulfilling few months around here thanks to our new writing center and guesthouse, and I’m going to be enjoying a creative change of pace for about 10 days in Los Angeles, where I am beginning a low-res program at Antioch University. I blame readers and commenters of this blog for convincing me of the MFA’s merits, and I’ll be carrying a little bit of you inside my caffeinated heart as I fly south. Tomorrow, I’ll post a great piece written by Rich Chiappone about his own MFA memories, which I read with much pleasure.

My own author’s life has had its requisite ups and downs in the last few months, of which I offer just this one goofy example.

First, the down. Not too many weeks ago, I had a novel manuscript rejected by a publisher with which I had worked — ahem — fairly recently. The rejection letter was kind, detailed, and appropriate. Except for one thing: the editor referred to me as “Andrea.” This publisher had me on their catalog cover not so long ago, but they didn’t get my name right in an email! Perhaps I shouldn’t be talking about this here, but I can’t imagine that said editor, recently hired, will locate this post, given that she isn’t aware of my name. And if she does? Ah well. Fifteen minutes of fame, expired. It’s a humbling business, isn’t it?

The very same day of that email rejection, an unexpected box arrived at my door. Inside were translated copies of my first novel, THE SPANISH BOW, which just came out in China. The edition is epecially beautiful. I have to admit I’ve flipped through it more than once, even though I can’t read it, just to marvel at the opportunity of having one’s work printed in unfamiliar characters. Enjoy the moments where you find them.

Coincidentally, my own mother has just been hired to teach English in China (congrats, Mom!), and I rather like the idea that she might happen to walk past a Beijing bookstore and see my book on display. 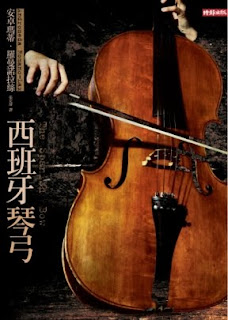 2 thoughts on “Andromeda: Insults and Celebrations”