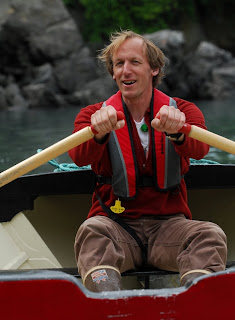 I’ve worked six years on my new book, The Fate of Nature: Rediscovering Our Ability to Rescue the Earth

, which comes out from St. Martins Press on Tuesday, June 8 (http://www.fateofnature.com/). (Everyone is invited to my book launch and slide show Tuesday night at 7 p.m. at the Wilda Marston Theater in the Loussac Library in Anchorage.) Given the amount of time I’ve been working on it, the book could hardly be expected to be timely. But the BP oil spill in the Gulf of Mexico has unfolded like a re-enactment of my stories from the Exxon Valdez spill in the book.

It’s weird and a little bit horrible for another big spill to happen right now. My freelance writing career began with that terrible, historic, heart-breaking, life-redirecting event 21 years ago. I was a reporter at the Anchorage Daily News, working in the one-man Mat-Su Valley Bureau, as a cub reporter of 25 years. The editors for some reason thought the Valley was a zany place, and expected me to produce a lot of ‘brights,’ those funny little pieces that brighten your day when you pick up the morning paper (retch). Since the area was in the depths of a four-year economic depression, I couldn’t always find a lot of laughs. I remember trying to spruce up a pathetic story about a woman who was trying to make money by finding a body for a head she had of a Marilyn Monroe doll.

When the tanker hit the rocks, I was young, ready to travel, and I had a four-wheel-drive vehicle. Mike Doogan was my editor. He sent me to Valdez with a truck load of reporters and photographers. And once there, I stuck. I stayed on the oil spill story for the rest of that summer, into the fall, and I have never really stopped covering it since. Being the only reporter on the scene for long periods meant I could freelance a lot of work to national publications.

I’ve been a full-time freelancer since 1992. I’ve published a lot of books. I’ve written about the oil spill, but I’ve never returned to it deeply, to pull out all the lessons and emotions of that summer. I did in The Fate of Nature. And now, here it comes again. Bringing publicity for my new book. And bringing a renewed sense of survivor’s guilt for me, as I again see a horror that I would do almost anything to prevent turning to the benefit of my literary career.

2 thoughts on “Strange coincidences: A guest post by Charles Wohlforth”