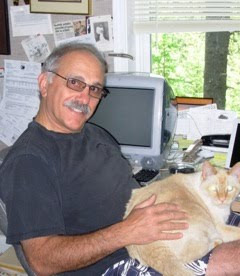 I feel like a lucky guy, I really do. As a writer, I have little ambition to do anything beyond writing as well as I possibly can each time I sit down at the keyboard, and yet, somehow, rather miraculously, I now have two hardbound books to my name. Neither of them were my idea: each was proposed to me by a publisher who saw my stories in magazines and wanted to collect them between covers. Let me take this moment, and this opportunity as guest blogger here on 49 writers, to plug my latest one: Opening Days, a collection of essays, stories and poems, published this past month by Barclay Creek Press. Given the vicissitudes of the rapidly changing publishing world, I know I’m very lucky indeed that I’ve never had to go looking for a publisher. Many of my more ambitious novel-writing friends are not feeling as fortunate lately.

I have a friend in one of the big, rectangular western states who has published three story collections, two novels, and a creative nonfiction book that has been in print for nearly twenty years. Even so, he has been trying to sell his latest novel for over two years with no luck. He recently shared an e-mail from his long-time publisher that basically said this: “We love this book. If you were a new, first time novelist we would buy it in a minute and promote you as the next new flavor of the month with the hope that this would be a huge seller. However, your last three books sold only forty thousand copies each, and our computer models tell us that this one will do the same. We love this book, (author’s name here), but we can’t waste our time on people like you anymore.” Well, maybe it did not say that, exactly. But that’s what my friend heard when he read it. And that’s what I heard too. It’s a story I’m hearing again and again lately from experienced, seasoned, professional writers, and it reminds me of something called a bad beat.

When I was in my early thirties I lived in Las Vegas for a time, working out of the painters’ union hall by day and watching my first marriage coming unglued by night. Sometimes, late in the evening, after our three children were in bed, I would go out and play poker in the casinos for a few hours to get away from the house. I liked the small, truck stop places such as the King Eight Motel on Tropicana Avenue a few blocks west of the putatively glamorous Strip. There were none of the giddy, wedding party tourists in the King Eight, no buses of elderly slot machine junkies pulling into the parking lot. There were just long-haul drivers and short-haul hookers and all the other kinds of bereft, sad-faced mopes that the capital of the Great American Cultural Desert, attracts. Many of them foolishly thought they knew how to play seven card stud. As nature intended, each tawdry, small time casino had a pack of coyotes feeding on these doomed wounded rabbits.

The predators were men and women of a certain age, mostly from the East Coast, retired and playing cards seven days a week to augment their Social Security. The men had great old names like Maury and Sid and Augie, and wore brutal polyester suits, and hats of WWII vintage. Their wifely counterparts sported rings on every cigarette-stained finger and called the dealers and the cocktail waitresses –and sometimes me– “Honey” or “Doll.” I was the only person at the poker table under sixty most nights back then, long before the current Texas Hold ’em craze was born. I played just well enough to stay alive and maybe take a little money off the rabbits, but I was no threat to the coyotes, and so they took me in.

It was a wonderful place to be miserable: nobody can commiserate like poker players can. They were happy to listen to the story of my marriage gone wrong, and more than pleased to share their own sad tales –which, I soon came to realize, were all about poker playing injuries they had suffered. Late in the evenings, when the hapless truckers and lonely traveling fertilizer reps were broke and gone, when the neighborhood folks had given up their dreams of the big payoff and headed home to bed, and the fierce ringing clamor of the slot machines had shrunk to an occasional desperate tinkle, I —almost out of money, but not wanting to go home myself— sat listening far into the night as the old players recounted the hands they had deserved to win that day –but lost anyway! Their bad beat stories.

Among poker players, bad beat stories are part of an endless competition in self-pity, each tale sadder than the one before it. Yet each one is really the same: the narrator played his cards right, and through no fault of his own, some other lesser player got stupendously lucky and won the hand anyway. Bad beats are the nadirs of every poker player’s existence, a slap in the face from all the gods of every religion, maddening in their cosmic unfairness. That said, they do make for compelling narrative, and that’s probably why, in these hard economic times, they have found a new home among literary types.

After hours, last month at the Kachemak Bay Writers’ Conference in Homer (disclosure: I serve on the organizing committee) I listened to several internationally published writers recount variations of the same horror story my friend in that big western state told me. Like disgruntled stud players who talk of huge pots raked to undeserving players at the other ends of the tables, these writers are seeing the fewer and fewer available book contracts go to newer, younger, hipper, and (presumably) less skillful writers. Again and again I hear them bemoan the difficulty of getting their second, third, fourth, even twelfth book published. The recurring story, muttered darkly over dark beers and darker whiskeys, is always the same: it’s the economy. Well, yes. But on top of that ongoing train wreck is also the unbelievable tsunami of hopeful manuscripts now crashing over the fewer and fewer editors left standing as the big houses lay off staff and close down imprints.

At the conference our guest literary agent, April Eberhardt, of the Kimberly and Cameron and Associates agency said that she gets TEN THOUSAND book manuscripts or proposals every year, herself. I checked with her this week to see if I remembered that number correctly. Here is what April said in the return e-mail: … “as an agency we receive about 30,000 queries a year, which works out to 10,000 per agent annually. Daunting to think about it….”

April said she accepts about twenty-five new clients a year, and has sold eight manuscripts to publishers so far. Some of those have suffered sixty or seventy rejections before finding their publisher.

Swimming up the face of Niagara Falls is daunting. Those are odds no poker player in his right mind would go near.

Late one night at the King Eight Motel, I found myself looking at a pat hand in a seven card stud game with so many players left at the end of the round the dealer had to get permission from the pit boss to shuffle the “muck” (the discarded cards) in order to deal each of us our last card face down. Given the cards showing face up on the table, I saw that the only player who could possibly beat what I was holding needed to draw the last ace in the deck. But I had seen that ace turned over by another player who had folded earlier. The dealer shuffled the muck and dealt. Sure enough, my opponent caught that one ace and pulled the monster pot away from me and into his hungry arms.

Every time I hear a bad beat story from a writer who is struggling against the terrible odds of the publishing game today, I start to think that maybe I should just keep writing pieces for magazines and forget about getting a book contract; maybe yet another small publisher gets the wild idea to do a collection of my stuff once more. Still, against all logic, I’ve been working on a novel for a few years now. So, when I hear an editor or an agent reminding writers how bad the odds are today, I think about that guy at the King Eight Motel poker room who miraculously pulled that recycled ace out of the muck and left me with nothing but a bad beat of a lifetime story –and then I go back to work on the novel.

Because, after all, really, the flip side of every bad beat is a miracle for someone else isn’t it? Why couldn’t it be me?

Richard Chiappone, a recipient of the Robert Traver Award, is the author of the story collection Water of an Undetermined Depth. His writing has appeared in anthologies and national publications including Playboy, the Sun, and Gray’s Sporting Journal. His story, Raccoon, was made into an award winning short film, and his work has been featured on BBC Radio. A thirty-year Alaskan, Chiappone lives with his wife, Lin, and several Siamese cats on a steelhead river near Anchor Point, the westernmost point on the contiguous highway system of North America. He teaches writing for the University of Alaska and serves on the faculty of the annual Kachemak Bay Writers’ Conference in the town of Homer.