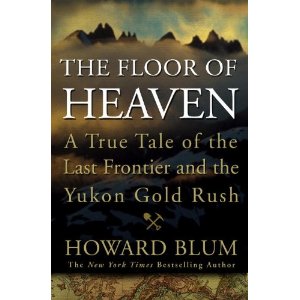 In June, best-selling author and two-time Pulitzer nominee, Howard Blum will keynote the second annual writer’s conference in Skagway, North Words Writers Symposium. Scheduled to be released today, his newest book, The Floor of Heaven: A True Tale of the Last Frontier and the Yukon Gold Rush

, braids the adventures of three historical figures: Charlie Siringo, a cowboy detective, Jefferson “Soapy” Smith, and George Carmack, the prospector who first discovered gold in the Klondike. Twentieth Century Fox is developing Floor of Heaven as a major motion picture. He is also a contributing editor of Vanity Fair and author of bestsellers American Lightning

, The Gold of Exodus, Gangland, and Wanted! He has published eight nonfiction books and one novel.

As a nonfiction writer, I appreciated your “Note on Sources,” especially the chapter by chapter sources of information. You discussed how before mapping the narrative architecture of this book, you extensively read “piles and piles of books, articles, pamphlets, and monographs,” and travelled to Texas, the Alaska Panhandle, and Yukon Territory. How long did it take you to write The Floor of Heaven?

As a reporter at the New York Times specializing in investigations, I learned that you could research a story forever. You could spend your days hunting for just one more fact, just one more quote. Running around with a notebook in hand is sure a lot easier than actual sitting down to write. (Heck, just about anything is). But since newspapers have deadlines (and often demanding and vitriolic editors to boot), I had to teach myself when to throw in the towel, when to sit down to write the damn thing. It’s the same sort of process and dilemma with a non-fiction book. You can never do enough research – but if you research forever you’ll never get the thing done. Paul Valery wrote that “a work of art is never finished, just abandoned.” Now, I ain’t claiming that The Floor of Heaven is a work of art, but there came a time when I just had to stop looking for one more new fact, one more new detail. The book business is a business; when you take an advance, you sign a contract. I’d agreed to deliver my book in three years. It took me a little longer than that. I didn’t interview all the people, all the descendants I might’ve. I didn’t read all the books I could’ve, or visited all the places I’d planned on. But I got it done, and accurately I’d like to think. And I wrote The Floor of Heaven in not too much longer than the specified three years.

In Phillip Lopate’s essay “On the Ethics of Writing About Others,” recently published in Creative Nonfiction, he examines several approaches to writing about others. He says, “Some writers get around the problem by showing their manuscripts to the people being written about and asking if they object to anything.” Did you have any descendants of Siringo, Smith, Carmack or any Alaskan for that matter, including Alaska Native communities, review drafts of the book? How was it received? What is your approach to writing about others?

I’m always wary of giving the people I write about a sneak preview of what’s coming. It’s like when I look in the mirror: I’m never really satisfied with what I see – but I know it’s the truth. And when I write I hold a mirror up to people and I really don’t care to worry about whether they think it’s flattering. All I care about is that it’s true. Here’s the problem: Someone can be 5’2″ and you can describe them as “short” and the next thing you know they’re offended and demanding a retraction. I try to write what I see. I try to report accurately. Yeah, I make my share of mistakes. And I publish corrections if necessary. But showing someone what’s coming before it’s in print is like reaching into a hornet’s nest. You’re bound to get stung. I never do it, and never will.

With recent investigations accusing Greg Mortenson of grossly exaggerating and fabricating parts of Three Cups of Tea, the spotlight is once again on the ethics of nonfiction writers. In The Floor of Heaven’s “Note on Sources,” you state that “no source — not even a first-person account, or contemporaneous newspaper articles, or, for that matter, an article in a scholarly journal — could be accepted at face value…I would need to make judgments about which versions of the past made the most sense to me, which seemed the most reliable.” What advice do you have for nonfiction writers in making the right choice? How did you fill “holes” in your story?

With so many versions of the truth, how do you know what really happened a century or so ago? The honest answer is – you can’t. And if you’re setting out to write a book like The Floor of Heaven that aspires to be an accurate history as well as a page-turning and suspenseful mystery – well, you’re just gonna need to make some choices. I didn’t want the book to drone on like a scholar’s tome, with caveats that interrupted the narrative by exclaiming that while some scholars say this, others say that. I had to make what I thought were reasonable choices. I had to trust my own judgments, and by reading the book the reader is showing his faith in me and my informed subjectivity. But it’s a difficult literary tightrope to walk, and to keep my balance I stuck to some rules. Let me share them. One: When dialogue appears in quotes, these are words that can be directly attributed to an actor in this story. They are taken from either the principal’s own writings – books, letters, diaries – or a contemporaneous newspaper or literary account. Two: When I describe what someone in this story is thinking or feeling, these are thoughts and emotions that were first reported by the individual. And three: When a location or incident is described, the details are well grounded in my research. As for filing “holes” in my story, I never tried to plug ’em. I just used what I could substantiate – and left out the rest. The “holes,” as you call them are there. I can only hope they’re not too gaping.

You captured the draw of Alaska for Siringo, Smith, and Carmack as “running away from something in their own lives,” “making a fresh start,” and looking for adventure. “They were heroes who had outlived their usefulness. Their spirits found neither joy or comfort in the routine; and —a curse? a blessing?— they had grown accustomed to the sharp edge of uncertainty that shaped an active, dangerous, self-sufficient life. They wanted to grow old boldly, and in the company of new adventures.” Do you think it’s important that a place like this exists even today?

People are still looking for adventure, for excitement. That’s human nature (thank God). Some people will find it covering a war in Libya, or waking up each morning in a still rough-and-tumble place like Alaska. Or, as I do, sitting down each new day and taking on the challenge of filling a blank page. I admire people who take large risks, and The Floor of Heaven is, in its way, a tribute to these sorts of adventurers, to these tenacious men and women. It’s a story about the indomitable spirit that built this country. About men and women who didn’t want to settle, but instead took large risks. And this is a spirit and a mindset that is still around, still going strong. Long may it prosper!

A typical day is pretty boring stuff: I get up, make coffee, and then I go to work. Some days I’m done at noon, other days it’ll stretch on till 4. But usually by 4:30 I’m off for a jog. I don’t listen to music when I run. I think about what I’ve written that day and how I can make it better. When I come back, first thing I do is make notes about what I thought about during my 3 miles or so through the Connecticut countryside. Then I put it aside. My work day is done. Only to start again in the morning as soon as the coffee is brewed. Oh, when I got out of college, I worked first at The Village Voice and then at the New York Times. Those were jobs with offices and desks and starting times. But for the past two decades or so I’ve been my own boss. Each day waking up, making the coffee, and then sitting down to work.

In a PopMatters interview, you said you want to be remembered as a father to Tony, Anna, and Dani. How do you balance your role as a father with your writing career?

Retractably, I don’t think I’ve pulled off the balancing act too well. This is my tenth book, and, well, they do take time. I think my three kids would be the first to point fingers telling me I’ve put my work first. And I think my ex-wife would too. John Gardner wrote words to the effect that if a writer is lucky, he’ll never love too much. Well, I’ve had my loves. I’ve enjoyed my distractions. But I also have typed a lot of words. I think my kids probably think too many. But they’ve now all teenagers, one in college, one heading off in the fall, and one still struggling through high school geometry. I’m immensely proud of them and the people they’ve grown-up to be – in spite of my distracted parenting.

Have mentors played a role in your career? Who were those mentors and how did they help you?

I’ve had my share of mentors. The one, though, who had the biggest influence on my work and on my life was Dan Wolf, one of the founders of The Village Voice. By editing my personality, by trying to cull out everything that was indulgent or superficial or just plain dumb in the way I went about my days, he edited my prose. It was an uphill battle, but if I got anywhere at all, it’s thanks to Dan. These days I work with Rick Horgan at Crown. I don’t know if someone younger than you can be technically a mentor. But I trust Rick’s judgment totally. He never fails to improve whatever I write.