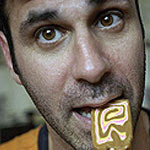 Steve Almond is a writer’s writer — an author who has not only given us one-of-a-kind books (God Bless America, The Evil B.B. Chow, Candyfreak, My Life in Heavy Metal and more), but also shows up frequently in the New York Times, on NPR, and in blogs like The Rumpus, talking up literature, culture, and interesting ideas in general. Ask anyone who’s crossed paths with him at writing conferences or at nonprofit writing centers, and you’ll hear the same things: he’s thoughtful, passionate, and funny. Here at 49 Writers, we were thrilled when Mr. Almond donated a book to one of our very first fundraisers over a year ago. And we’re even more thrilled that he’s coming to Alaska. In just over a week, on Saturday April 7, he’ll teach two clinics for 49 Writers (“Obsessive Writing” in the morning, and “Funny is the New Deep” in the afternoon) and appear with David Stevenson at a Crosscurrents Event, “Literature in an Age of Moral Depravity” (7 pm, Anchorage Rasmuson Center) before zipping off on the rest of his Alaska book tour.

We distracted him from packing with the following 4.9 questions:

49W: We’re thrilled to have you making the trip north. What attracted you to Alaska?

Steve Almond: I nearly went to grad school in Fairbanks fifteen years ago, and I’ve always regretted that I didn’t. I’ve been hearing that I need to visit since then, just to see the landscape. But the main reason to come is to meet a bunch of Alaskan writers and readers. We’re basically like one weird far-flung tribe.

49W: You’re teaching a course on writer’s obsessions and how they translate into good writing. I love the advice (cited in an interview) that you got from an elder writer: “The only thing that matters is the thing you can’t stop thinking about … Dress it up how ever you like, son, but tell me the goddamn truth.” Why do you think apprentice writers fail to use their obsessions as engines for their writing?

Steve Almond: Most people think of their obsessions as embarrassing, especially writers early in their careers. They’re working so hard to seem serious and respectable — and being obsessed is considered just the opposite. We’re also instructed by the culture not to care too much about anything. It makes us seem crazy. So we’re all carrying around these secret fixations, and denying it in public. But I’ve done much better at connecting with readers when I’ve stopped fronting and simply burrowed into my obsessions. It’s a matter of allowing yourself to tell the truth about the stuff that matters to you most deeply — whether in fictional disguise or not.

49 W: Humor is one of your strengths and it’s another subject you’ll be teaching about. To what extent is humor teachable—i.e. can it be coaxed into being using specific composition or revision skills? Are students resistant to stretching that particular writing muscle, knowing they could fall flat on their faces?

Steve Almond: Look: everyone has a particular sense of humor That’s just how people work. Humor isn’t some tool in our writer’s toolkit. It’s an evolutionary adaptation we developed to deal with the bad data of the world around us and inside us. What I exhort people to do is simply let their sense of humor onto the page, to not withhold from readers one of the central facets of their personality. I don’t mean to make jokes as a way of avoiding the serious stuff of literature. In fact, I mean just the opposite: that sometimes the only way to get to the darkest stuff is by coping to the utter absurdity of yourself and the world. That’s what humor is.

49 W: You write and publish broadly – longer narrative nonfiction, essays and book reviews, short stories and flash fiction, and a co-authored novel, with Julianna Baggott. You also seem to make some risky, passionate decisions, like quitting your teaching post at Boston University in protest, when the school invited Condoleezza Rice to be graduation commencement speaker. I’m guessing also that there are some principles that guide your writing and your life. Anything you’d like to share?

Steve Almond: Most people are drawn to writing, and art in general, because they want to feel more, to have more empathy for the world and themselves, and to be more courageous in seeing the world as it really exists, in all its unbearable cruelty and wonder and moral complexity. I feel the same. Art can and should make people feel more than they did before. That’s it’s big moral accomplishment — to remind us of the basic stuff Jesus talked about in the Sermon on the Mount. Those lessons are easy to repeat but hard to live. Art helps.

49 W: The final 0.9 question, meaning you can leave us hanging at the very end, if you’d like. What are you working on now?

Steve Almond: A horrible novel. I’m always working on a horrible novel and failing and hating myself for that failure. It’s my M.O. as a writer, basically.

Don’t miss your chance to register for one of Steve Almond’s writing clinics on Saturday, April 7, and we hope to see you at the Crosscurrents event with Steve and UAA MFA’s own David Stevenson, that evening.