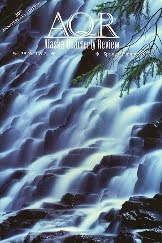 Originally planned for posting tomorrow, we bumped this up because it relates to a special event taking place tonight, April 18. Thanks to Nancy Lord for the review.

The University of Alaska Anchorage at the the Alaska Humanities Forum celebrate 30 years of Alaska Quarterly Review’s excellence with a special program Wednesday, April 18, at 7:00 p.m. at the Anchorage Museum. The public program features AQR’s special section Liberty and Justice (For All): A Global Photo Mosaic, with photojournalist guest speakers, Anchorage Symphony musicians, and a reception.

The Alaska Quarterly Review has long been a showcase of literary excellence. The fact that Alaska, not always known as the home of high culture, has produced such a top-notch expression of literary art for thirty years is to be credited to both visionary founder and long-time editor Ron Spatz and the support of the University of Alaska Anchorage. That’s right, thirty years! The current issue (Spring and Summer 2012) celebrates the anniversary with trademark quality and innovation.

In a special section, the new issue features a superb gathering (“a mosaic”) of photographs illustrating the theme of “Liberty and Justice (For All).” Printed on good quality photographic paper, the 68 images were contributed by first-rate professional photographers from 22 nations. The project was assembled by editor Spatz’s son Ben Spatz (once a high-school photographer for the Anchorage Daily New’s Perfect World section and now a Truman National Security Fellow with considerable international aid experience.) The younger Spatz dedicates this work to the memories of Tim Hetherington and Chris Hondros, photographers killed last year while covering the civil war in Libya. The two were well-known and respected in the international photographic community, friends to many of those whose work is collected in this volume to honor them.

The old cliché is true: a picture is worth a thousand words. But that’s only the beginning of what is so valuable here. Each photo was selected by the man or woman who took it, and the short essays that accompany them each speak to personal meaning as well as applicability to the theme. The power of so many interpretations, from all corners of the world, add up exponentially, with each piece working with and against the rest for a fuller, many-faceted picture.

If you thought you knew what “liberty and justice” mean, you will find the variety here astonishing. Many of the images document the many wars, past and present, that plague our world, but they are not always combat photos. Some are decidedly domestic, like that of the fully-outfitted American soldier sitting in a Baghdad living room, or the Palestinian family having tea while a gun battle rages outside. There are photos of sex slaves, child soldiers, mourners, voters, and a cellist practicing behind a wall. There’s one of a little girl, a Sierra Leonean war amputee, raising her good arm against the Statue of Liberty in the background. The narrative with this one tells its “afterstory”; the girl, in our country to receive a prosthetic arm through the generosity of American doctors, was subsequently adopted and is now a teen-ager with her own American dreams.

Perhaps it’s not surprising that so many of the photos illustrate not liberty and justice, but the lack of them. They point up the difference between ideals and reality, even in our own country. I was particularly struck by the images of women and children—an enslaved woman carrying a stack of bricks on her head, a tiny child dying of malaria, young girls plumped with steroids in a brothel. Again and again the photographers speak in their essays to their roles in witnessing tragedies and human rights violations. They see themselves as educators—even activists—advocating for the rights of people everywhere.

Alaska and Alaskans are included in this project, too. Marc Lester and Bill Hess contributed images of, respectively, hauling water in rural Alaska and WWII Alaska Territorial Guard veterans. Heidi Bradner, who spent many years documenting the war in Chechnya, is represented by a powerful image from that time: a dead woman lying in snow, her blood shockingly red against the white. Ben Spatz, from his time in Liberia, presents work that’s colorful in another way—a woman in a bright headscarf joyfully casting a ballot in an election that resulted in the first democratically-chosen female head of state in Africa.

The special section makes up the back half of AQR’s new issue, but the front half should not be neglected. There, as always, readers will find some of the best contemporary writing around—in this case five outstanding short stories and the work of 22 poets. These varied voices, though they were not selected to “fit” the liberty and justice theme, have a similar kind of resonance. They speak of how people live, love and hurt one another, survive. They help us see our world in fresh, empathetic ways.

For more about AQR’s 30th anniversary issue or to order a copy, go here. Read more about the issue and its origins at the Anchorage Press.

3 thoughts on “The latest AQR, a stunning anniversary issue: Guest-post by Nancy Lord”