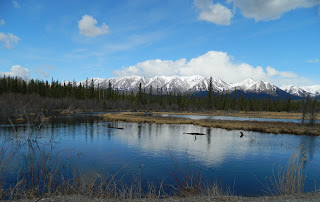 1.
Orientation-
finding A way, not THE way
to the end of the road,
to McCarthy
and then
the way beyond
bridges, backpacks, wagons
bears, soap berries, bears, black ones
moving across
a river running upstream
unrivering, returning to ice
meat, groceries
false promise where faded sign paint meets gray wood
meet the old hardware store
wares and unawares for sale
meet woodstoves and sheep skulls,
meet the outdoor shower and mccarthy creek
meet Bertha the hot water boiler,
feel free to feed her, wood
meet the poets
collectively a non sequitur,
collecting and discarding
image, thought and
sensory space surrounded by circles
of attention
to summarize dickinson,
my business is circumference
arriving
doesn’t mark
journey’s
end
go in
through
copper,
up chitina
and kennecott
go out even
as going in
so many
bridges suspended
between
banks and
worlds and minds
connections
and disconnections
arrivals
and departures
opening
ceremonies, ritual
spring
floods
2.
Dan Beachy-Quick, our soft spoken guide for the
workshop welcomes us and leads us to contemplate accuracy’s paradox and to work
toward poetic forms which are not a direct reflection of the natural world but
rather an exploration of the strangeness inherent in the growing space between
what we seek to describe through a process of apprehension rather than
definition.  When Dan’s voice stops
speaking and the spell is momentarily severed I am aware  of a seismic shift in what I am seeing in the
backlit light of the room.  This isn’t
going to be like other workshops, this is going to be a journey through terra
incognita, the terrain of exploration.

3.
“However the star knot is the chief thing…I
shall study it further”–G.M Hopkins.
Despite Beachy-Quick’s frequent references to Keats, he admits following
our discussion of “Oaks” from Hopkins’ Diary, that to have these words tattooed
upon his body would perhaps aptly do justice to the magical language of poetic
inquiry that Hopkins attained in his observations, his explorations into the
laws of things.
4.
As poets, we seek to do with language that which
Thoreau does with fire in an excerpt from his journal (31-May-1850) written 6
years after the event.  “That way went
the flames with wild delight, and we felt that we had no control over the
demonic creature to which we had given birth.
We had kindled many fires in the woods before, burning a clear space in
the grass, without ever kindling such a fire as this.”
5.
Community Word Jam at the Old Hardware Store,
Patt Garrett, who earlier in the day guided us through time, trains, mines and whores at
the McCarthy-Kennicott Museum asks the audience if we want a story about
mothers or puppies?  Hands are raised,
it’s too close to count so Pat lets her grand-daughter in attendance
choose.  It’s a story about the puppies
and their owner a  terrifying, abusive,
pot-dealing man that lived next door in Barrow one winter long ago.  It’s not the fuzzy puppy story we’d
expected.  Expectations are distractions.  Winter in Alaska is a harsh story for all
involved, even puppies. Susanna Mishler shared a workshop piece from the Kenyon
Review Writer’s Workshop which lowered a bucket, hand over hand over rope, into
a deep well, drawing out darkness and “sweet abandon”.  Nabil Kashyap’s reading from his “My City
Year” column, shattered the room with laughter. Laughter requiring one to take
a deep breath, tell yourself, ‘it’s not that funny’ even though you find even your
dishonesty humorous and laugh harder yet in the face of it.  A town made of poems, stories and songs, a
few guitars and a big red cello.  A rapid
fire spoken-word song by Mickey Kenny again shifted the shape of the once
sunlit room, now darkening.  Words
filling the room even after the light had faded from it.  An unplugged event in the truest of
senses.
6.
At the
lake shore, the poets, a small, contemplative army, armed with ink, eyes,
tendrils. Across the water, glacier in gravel veneer and above, Fireweed
Mountain.   This near shore, seed heads
of dryas octopetala, little Einsteins, grow wings and are moths and are poems
of a place. One poet, squinting so much glacier, so much glare cannot see
mountain but only a mountain shape hole between sky, between lake.  Rockfall, from glacier to lake, so many small
songs, mountain, rock, carving and uplift.
Poet hears mountain but yet still does not see it, instead noticing tiny
caterpillars on boot laces.  Larva on
lace, how many life cycles roll through this meadow each summer?  On fingertip now, caterpillar, head lowered
in prayer to dryas, abdomen raised in peaked arch, tail grounded, or at least
fleshed.  Seeing now, that which was so
obvious as to be unseeable, fireweed mountain framed in the arc of caterpillar
body.
7.
After so much stimulation and sun, this
southeast Alaskan inevitably reacted.  To
what exactly is still unclear, but following a day of ambling on the Root
Glacier, imagination and mind roots coursing through the unseen sub-glacial
watershed of wonder, I was forced to bid farewell to this dear place, the non
sequitur of poets, to a place to be placed beyond place and head back to the
world and a steroid shot at the Glenallen Clinic.
strangeness now systemic
blood-coursed through body, through earth
veining and rooting through dark
gathering strength
rising bloom, rash of pox
(read more
of this poem, Veining
and Rooting)
McCarthy
and the Wrangell Mountain Center offer a unique, uncharted environment in which
to immerse yourself in writing and
exploration. Don’t miss the 3rd
Annual Poetry Workshop next year. What I found really different about this
workshop was the single instructor/guide model and
am grateful to have had the chance to work with Beachy-Quick as well as with
the non sequiturs.
***
Jonas Lamb is a librarian and
poet living in Juneau.  His work has been
featured in The Kent Collector, Tidal Echoes and several journals that
have since ceased publication as a result of publishing his work (Quirk, Raw
Ether). He is a strong believer in the
‘parenting is poetry’ mantra and is writing two young boy-poems called Finn and
Oscar Wilde. Read more at http://jonaslamb.wordpress.com
Partial Reading List:
Celan, Paul.  “The
Meridian” from Collected Prose trans. by R. Waldrop
Christenson, Inger. “apricot trees exist” from Alphabet
Evans, K.L.  “Preface”
from Whale!
Hejinian, Lynn.
“Strangeness” from The Language of Inquiry
Hopkins, Gerard Manley.
“40: (Carrion Comfort)” and “41: ‘No worst, there is none.  Pitched past pitch of grief”” from Poems
(1918).
Hopkins, G.M.  “Oaks”
from Gerard Manley Hopkins’ Diary (1867).
Mandelstam, Osip.  “He
who finds a horseshoe” from Osip Mandelstam: Selected Poems trans. by
W.S Merwin.
Thoreau, H.D.
“31-May-1850: I once set fire to the woods” and “20-May-??: Annuals,
which perish root and all” from Thoreau’s Journal.
Views: 20