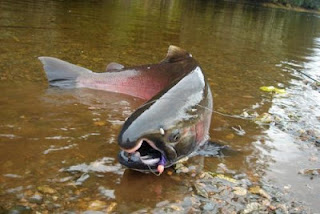 We have a winner! Our readers have spoken, and “One fish, two fish, red fish, more red fish” surged ahead in the final few days to win this year’s Ode to a Dead Salmon contest. This fishy homage to Dr. Seuss captured the spirit of the challenge to produce clever bad writing with a distinctly Alaskan flavor, and clearly secured your votes for that reason. Congratulations to the pseudonymous Sam N. Cook, a writer we can vouch for who prefers to remain anonymous! We must also congratulate Lee Goodman for making the final three with not one but two witty entries, which were widely enjoyed.

Thank you to everyone who submitted entries, to all of you who participated in the voting, and to our judges Nancy Lord and Bill Sherwonit. And thank you, Ray Troll, for donating a signed t-shirt to our winner.

For your reading pleasure, here again is our winning entry:

Blood lust be howlin’
under the clouds
Our neighboring netters
are boisterous and loud.

full of fish I should envy
but I cannot go near
‘cuz it’s way too early
to smell that much beer.

Veering away
toward my friends and our nets
How is it possible,
I think with regret,

An hour and a half and
we’re already done
with ten fish for the two of us.
But the fun’s just begun.

Did I mention I did not
grow up around fish,
nor gutting, nor cleaning,
and hours later I wish

we had just stopped at five.
But we’re not that bright,
so we two first-timers
were up late that night.

Would I do it again?
In a heartbeat I’m thinking,
but next time around,
I too will be drinking.

To see all this year’s entries, visit our Ode to a Dead Salmon blog.
Views: 62