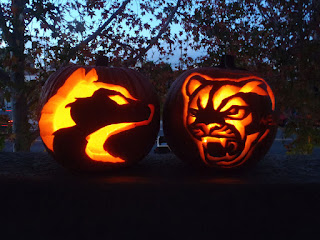 “Life belongs to the
living, and he who lives must be prepared for changes.”
~Goethe
It started with pumpkins. Jack o’lanterns, to be specific.
My son and his then-girlfriend (now wife) are alumni of rival universities, so
they went one-on-one in a little friendly competition, carving their mascots,
the WSU Cougs and UW Huskies, into jack o’lanterns.
“I’d send you a picture,” my son said. “But you don’t text.”
You could text pictures? I had no idea. That’s how Cro-Magnon
I was. I’d shunned texting. What happened to conversation? If people had
something to say, they should call. I was so anti-texting that I’d my phone
carrier shut off the feature.
But there were those pumpkins. One thing led to another, and
I got an iPhone. Now I text all the time, and I’ll never miss another jack
o’lantern. But I re-drew the line at Twitter. Really, 140 characters? It made
no sense.
Then I ran some analytics on my website. Fresh content was
what I needed– more of it, more often. A Twitter feed was a whole lot easier
than logging into my website every day and finding new things to say there. All
I had to do was jump on Twitter and post or retweet.
It really was that easy. In two minutes, I became
@debvanasse, and I discovered that – duh – there really is a reason for
Twitter. It’s not an evil plot to destroy the world by promoting snippets and
abbreviations over extended thoughts. It’s a way to share actual content,
almost like skimming a whole shelf of books on your favorite subjects and by
your favorite authors, only at hyperspeed, with the capability to instantly
share the good stuff without having to worry about whether you’d get your book
back.
In a flash, I get briefed by @GalleyCat and @PublishersWeekly
about what’s going on in publishing. I get to know authors I admire (who knew
@margaretatwood had such a passion for environment?) I get to chuckle at the
ever-witty @donrearden (from last week: “That’s odd. The #NFL just called and I’ve been hired as a Ref! Sweet!”) and
my brother @lehmannchris (“Bidding on Jonah Lehrer-Mike Daisey spoken-word collaboration
to begin first thing in the morning. http://slate.me/UR4M0f “)
Lots of tweets contain links to longer content. At first I
fretted over the cute little URLs. No problem: Twitter shortens them for you.
And those #hashtags – was that some sort of secret tweetspeak I had to learn?
Nope. The #hashtag feature instantly forms mini-discussion groups on pretty
much any topic you can think of. You can include them or not in your tweets.
I fell in love with the #hashtag feature when the first in a
string of September wind storms (aka #Arcticane) knocked out my power for three
days. Calling Chugach Electric was pointless –  there was no way to get through. But at
#akstorm I got on-the-ground reports from around the city and updates from
meteorologist @brettshepard, and the only power I needed to do it was an
occasional charge of my iPhone at a coffee shop that still had electricity.
Once the melee was under control, the power companies woke up and realized
through social media, they could communicate with customers a whole lot more
efficiently. Now I follow @ChugachOutages.
Twitter isn’t hard, and unless you’re a social media addict
(and I realize some people are), it won’t suck up a lot of your time – I spend
an average of two minutes a day in the Twittersphere. But my point is not to
convince all of you to jump on Twitter. Rather, it’s a reminder that if you’re
serious about writing, if you’re serious about your career, a social media
strategy should be part of your business plan.
Earlier this month I attended the Publishers Weekly webinair
“Develop a Winning Tablet and Mobile Strategy.” It’s a complex and rapidly
changing market out there, Stephen Ryden-Lloyd of Innodata Consulting reminded us, a
multi-screen world in which we simultaneously use multiple devices. I’m no
techie, but I could have been his poster child. As I watched him on my laptop, I
had my iPhone at my side (I could skim tweets if the webinair started to drag)
and my Kindle close at hand (I’d just downloaded a free electronic version of a
book published in 1884; I needed it for research on my Wealth Woman project, but there had been no librarian available to
help when I tried to access it from the rare books collection at the local
library).
Social media is so much a part of our culture that it will
likely become embedded in books; the new generation of readers, Ryden-Lloyd says,
will demand that social media capacity so they can chat about what they’re
reading in real time. You can throw up your hands and say it’s all too much,
you just want to write books, or you can keep writing those books but also vow
to spend five minutes a day connecting with authors and publishers in real
time.
If you, too, decide to plunge into the Twittersphere (or if
you’re already there) join me in using these hashtags: #AKwriters, #AKbooks,
and #AKBookWeek (which starts Oct. 6). It’s another way for us to connect, and
to make sure the world knows what we’re up to. And if you follow us at
@49writingcenter, we’ll follow you back!
@debvanasse crossposts
at www.selfmadewriter.blogspot.com.
To learn more about integrating social media strategies into your writing life,
sign up for the three-hour 49 Writers Workshop “Building a Platform as a Writer”
taught by @bigstatebiglife (Lorena Knapp) on Oct. 27.
Try This: Find oneauthor you like on Twitter and one on Facebook. Follow and friend. See how
connected you feel, and how inspired.
Check This Out: MediaBistro’s 49 Power Tips for Twitter.
Views: 5

3 thoughts on “Deb: How I joined the Twittersphere”