Athletes who train “at altitude” force their bodies to
become accustomized to the lower oxygen found at higher altitudes. Returning
back to sea level, the body can perform even better.

And what does this have to do with writing and selling literary
fiction or nonfiction?

For the last two months, I’ve been working full-time as part
of a writers’ collaborative, doing spec TV writing with the goal of getting a TV show set and filmed in Alaska. The challenges involved exceed my blogging
space, but let me just name two. First, about the storytelling. Today’s
television writing is more sophisticated than it’s ever been (Breaking Bad, Mad
Men, The Good Wife, etc). Even so, to write for TV is akin to trying to draw the
Mona Lisa with a very fat crayon. The format is unforgiving. The attention
spans are short. The audience has to be re-engaged every single week. Viewer of
episode seven may never have watched episodes one to six.

There is very little room for subtlety–and yet some shows
do in fact somehow manage to be subtle. If you’ve seen The Good Wife, you might
recall that the pilot episode opens with a two-minute scene in which the
protagonist, Alicia, becomes fixated staring at a piece of lint on the sleeve
of her husband, a Chicago state’s attorney, as he reacts to questions about a
sex and corruption scandal, in a room crowded with journalists. If you’ve seen
The Mad Men pilot, you might recall that nothing is said about the family of
adulterous Don Draper until he arrives home at the end, and kisses his sleeping
children. The fact that some of the best TV shows lately manage to convey
subtlety—and that those particular TV writers had enough faith in the viewers
to trust them to get it–verges on
the miraculous.

The best TV
writers rise to the challenge by creating characters that you understand and
care about it within minutes. That’s been a big lesson for me, accustomed to having
dozens or even hundreds of pages to urge a reader to truly understand and care.
Whether drawing with a fat crayon (in TV world) or a more forgiving sketch pencil
(in novel land) I’m realizing now that I have to get certain essential details
sketched in more quickly. Surprises and details and deepening will come along—again,
think of that Don Draper moment mentioned above—but we won’t care if we don’t have
a strong grasp of the character long in advance of the great storytelling
moment.

So let’s say in TV land you get ten minutes—or maybe five
(maybe two!)—to secure the viewer’s attention and bring a character to life.

Those first minutes seem like a lot in comparison with the thirty
seconds you get when you first start trying to pitch a TV idea with the hope of grabbing someone’s interest. (The full pitch
will run longer than a minute, but as you can imagine when pitching any idea to
anyone, it’s the first seconds that matter most.)

In TV land, most often, before you get to write a story, you
have to make a pitch. Even if you’ve already
written the story, you have to be able to make a pitch. (And probably not
once; probably dozens or hundreds of times.) You say you’re a writer, not a
speaker/dramatist/comedian? Too bad! It’s time to bring out those verbal
performance skills and try to convince listeners, over and over, that your idea
has merits.

The great thing about writing a book instead of a TV show is
that publishers generally let the writing—not a brief verbal pitch, or even a
snappy query letter – convince them of the project’s merits. Sometimes that can
be frustrating, as when you’d really like to sell a novel based on a few
chapters, rather than the whole thing. But more and more these days, publishers
want to read the entire manuscript. It’s about as different from the TV world
as one can get.

And yet—there always comes that time, after a novel or
memoir is published, when you do in
fact have to boil it all back down to a pitch, just as if you were working in
Hollywood. As do the people helping you, from inside the publishing house. Your
editor has to pitch it to the marketing people, to get them onboard. Your
marketing people have to pitch it to the bookstores. You have to pitch it, whether
to radio interviewers or to friends around a dinner party table, when they ask,
“What’s your book about?”

I used to hate that moment.

So here’s what “training at altitude,” trying to pitch dozens
of different TV ideas (even just to my own writing partners or TV mentors, at
first), has taught me so far.

You have to get over the anxiety hump and simply get used to
trying to explain an idea to lots of different people, lots of different ways.
As with all things, practice helps. Try, alter, experiment. Don’t hold it all
in, waiting for the magic day your book hits the shelves. If you’ve clinched a
deal, you probably have a good year to start practicing the explanation of what
your book is about—and be flexible. If a certain angle doesn’t seem to convey
your novel or memoir verbally, try something else. What works as flap copy may
not work delivered at a party, when people won’t focus for a three-paragraph
schpiel.

In other words, it’s not good enough to memorize a canned
speech or brief elevator schpiel. According to Good in a Room author Stephanie Palmer, a real pitch is an
interactive dance, shaped to the situation and the audience. The sooner if it
turns into a conversation or Q & A, the better.

To that end, it’s good practice to answer the “What’s your
book about” question with more of a teaser than a speech. If people want to
know more, they’ll ask. If they really don’t, Palmer would advise, don’t keep
going—and she says this is true even in hard-selling Hollywood. (Palmer is a
big advocate of developing rapport and sharing information, but not selling at
every opportunity.)

How does this relate directly to how I might explain one of
my novels, such as The Detour, to
acquaintances now? Instead of launching into a memorized schpiel, “My second
novel starts in 1938…” I might try to tease and tailor more. If I knew the
listener had recently traveled in Italy, I’d start there. If I knew someone had
an interest in classical art, I’d focus on the fact that my novel is about a famous
statue. If I knew the person loves a good love story and doesn’t care one bit about
history or art, I’d explain much sooner—“The Detour is really a buddy road trip
story through Italy that turns, in the end, into a love story.”

Before, when I went “off script” is such a way, I felt like I’d
failed somehow, forgetting my stump speech. Now I understand that getting off
script—and into a conversation that builds rapport—is much more essential than
conveying every detail.

The truth is, verbally describing our ideas and our projects
is always tough. Training at altitude, pitching your ideas in various ways and
in less-than-ideal situations, you invite the pain in and realize it’s OK. Hopefully,
back down at sea level—talking about your book among patient people who really want to know, who will even help by
asking great questions!—things will feel blissfully easy. 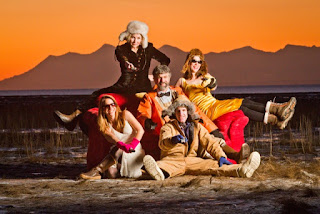 ﻿
Andromeda Romano-Lax (lower left, with Alaska TV Pilot Project collaborators), is the author of The Spanish and The Detour. She teaches for the 49 Alaska Writing Center and for UAA’s low-residency MFA program, and she is working on a new novel about a 1920s psychology scandal, set in Baltimore. ﻿
Views: 6