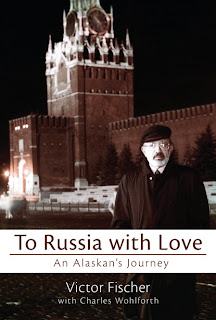 Just in time for tomorrow’s election, with the question of convening
another Constitutional Convention on the
ballot, we bring you Lizbeth Meredith’s interview with Vic Fischer, delegate to
’s
original Constitution Convention, and Charles Wohlforth, who co-wrote To Russia with Love: An Alaskan’s Journey, recently released by the .

Son of the famous American journalist Louis
Fischer, who corresponded from and then , and the
Russian writer Markoosha Fischer, Victor Fischer grew up in the shadow of Hitler
and Stalin. Eleanor Roosevelt personally engineered the Fischer family’s escape
from , and soon
after Victor was serving in the United States Army in World War II and fighting
opposite his childhood friends.  This
unique autobiography recounts Fischer’s life in , , and finally
, where he played a central
role in civic affairs as a delegate to the Alaska Constitutional Convention.

Vic, which authors inspired you
as a young reader?
Jack London, Victor Hugo, Alexandre Dumas, Karl May, and James Fenimore
Cooper.
Was there one particular moment
or event as a boy when you realized you were destined for a life of leadership
and civic involvement?
While I was conscious of social and political issues from my
earliest years, at the national and world levels, my boyhood interests focused
on technology, specifically electricity. My community activism emerged
gradually, beginning when I came into my twenties.
You’ve had such a rich
history as a delegate to the Constitution and in the senate. Is there
any one professional accomplishment that you’re most proud of?
There have been so many marvelous and diverse experiences in my life
that it’s hard to focus on any specific accomplishment. Helping write ‘s
constitution was certainly a grand accomplishment, and one
that I’m certainly proud of, but there were fifty-five of us.
Probably my one most specific contribution there was to include a powerful
home rule provision for local governments.
When did you decide to write
your book? Who/what motivated you to take it from an idea to the final printed
copy?
About
15-20 years ago, I began to think about writing stories of my life, made a list
of them, started outlining some, wrote up a few. In 2009, as part of
celebrating the 50th anniversary of statehood, Karen Perdue of the President’s
Office initiated a  grant for me to
write my stories into a book. I chanced to talk to Charles Wohlforth while
looking for an editor, and he expressed an interest in working with me. His
skills and discipline helped bring the project to fruition.
There appears to be interest in a Russian edition. If that
solidifies, I will adapt this book for the Russian readership and see
to its translation, with advice from several colleagues there. The effort
would necessitate much revision, beginning with the book’s title.
If you had a single message,
boiled down into a sentence or so of what you would like readers to take away
from reading your life story, what would that be?
Find, evolve, and strengthen your values, and live by
them. Be open to opportunities, take risks. Participate in your community,
large and small. Live a good life, and have fun
Charles, did you know Mr. Fischer before you
wrote To with Love together?
Like many people, I’ve admired Vic Fisher for a long time–since I first
became aware of politics as a child–but I knew him only as an acquaintance
from political fundraisers and as a source for articles I had written.
What details of his life did you find
surprising, and why?
Vic’s early life is an extraordinary tale, almost too good for fiction:
escaping from Hitler as a boy in the wake of the Reichstag Fire, becoming a
Russian but then escaping Stalin with the personal intervention of Eleanor
Roosevelt, becoming a man and going to war as an American– with his his
closest childhood friends fighting opposite him, on the German and Russian
sides of World War II. And that’s only the beginning! Finally the story comes
full circle as Vic, in old age, reunites with friends divided by communism and
fascism,–the human spirit overcomes. I knew none of this before beginning the
project.
How did the actual collaboration take place?
Were there structured times you got together, or was it an e-mail back and
forth kind of thing?
In each of my collaborative projects, we have developed a structured
interview process to bring a subjects life to the page. I interviewed Vic well
over 100 times; those interviews were transcribed and became the basis for my
work in creating the first draft of the text. In addition, Vic and I worked
through an enormous volume of documentary material, including thousands of
personal letters, to verify and expand his memories. I also did many interviews
with other people in Vic’s life, to further support the story. We were
determined for the book to be as factually accurate as possible, and to create
as many dimensions in his stories as possible using multiple perspectives. My
role was like that of a biographer, but with the subject on hand to make the
story his own. A book like this is an enormous endeavor requiring years of work
and creates a special relationship. I essentially downloaded Vic’s entire life!

You have a history as an author. Was
this the first time you’ve helped write someone else’s story?
This is the third time I have been involved in a project of this kind.
The previous titles were Crisis in the Commons: The Alaska Solution, by Walter
J. Hickel, which was a sort of intellectual autobiography and state history;
and Saving for the Future: My Life and the Alaska Permanent Fund, by Dave Rose,
which combined his autobiography and the first complete history of the fund. I
have been a freelance writer since 1993. I have written 10 non-fiction books
and contributed to many others. My best-known book is The Whale and the Supercomputer: On the Northern Front of Climate Change, which won the LA Times
Book Prize, among other awards.
How are you two promoting this book?
Vic and friends have set up a variety of appearances. We launched the
book at the Alaska Historical Society meeting in , with
more events to follow in and . We’ll
also have a website.
Views: 8

3 thoughts on “Liz Meredith: Vic Fischer/Charles Wohlforth interview on To Russia with Love”