Thanks to guest-blogger Eva Saulitis, whose new book, Into Great Silence, was released last week, and who will be offering a reading at craft talk at Great Harvest Bread on March 22 (sponsored by Alaska Quarterly Review and 49 Writers) and teaching a one-day clinic for 49 Writers, “Prose/Poem: Exploring the Boundary Between Poetry & Prose” on March 23. 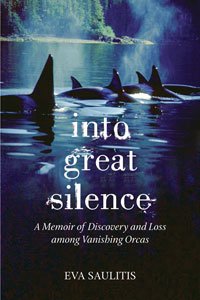 The personal essay, sigh, is my true love, home of my literary heart.

But I am a fickle lover.  For a few years, I abandoned the form entirely to have an obsessive affair with poetry.  When I think about it (and here comes the confessional bit), I have never been faithful to the essay.  Just take a look at this relationship history:

What does this say about me?  That’s obvious.  But what does this say about the subject of this blog post?  Wait, I haven’t even revealed that yet!  Here, I revert to the idea of the thesis, found at the end of the intro to the seventh grade version of the five-paragraph thingie we all, sadly, learned to call an essay (which it is not):

This blog post is about the shift I recently made, from writing personal essays to writing a book-length non-fiction narrative called Into Great Silence:  A Memoir of Discovery and Loss Among Vanishing Orcas.

So what does my relationship history say about that?  The same thing that all of those diverse form say about writing non-fiction: In important ways, the same rules apply.  Like “Tell the truth.” And “Sit thee down at thy desk and write.”  And “Think on the page.” And “Take emotional risks.”  And “Do your research.” And “Don’t back away from the unknown.” And, as Annie Dillard says, “Aim for the chopping block.”  As well as, “This is going to hurt.”  Letters, blog posts, diary entries, scientific papers: they all tell stories and think on the page.  As do essays, memoirs, books of narrative non-fiction.  They are various species of the same genera/genre.

Despite my wandering pen, I am, at heart, an essayist.  My best thinking is done following the map of my mind on the page.  In fact, it is only through writing that I know what I think at all.  Thus, I write bloated first drafts, twenty, thirty, once, even sixty pages.  This is because I am near-sighted, and I am perplexed about so much that happens in life.  Why did I get breast cancer? Why am I afraid to write creatively about my research animals, orcas?  What does extinction mean? Why did that guy at the party lurk in the shadows all night?  What is a prayer?

In a blog post, poet Camille Dungy asked, “What do writers do all day?”  Her answer:  “They ask questions.” Questions are my map, and I follow them for a long time before I make any sense of the terrain.  But to write a lot of words does not mean you can write a book.  In fact, if I were to have followed this impulse when trying to write Into Great Silence, I’d be at word count 900,000 by now.  But in fact, the first draft I sent to my editor was a mere 165,000.  (With a target of 85,000.  For me, not so bad.)

So is a book-length memoir merely a very long personal essay?  An essay arises out of a question, and that question is a variation of the question at the heart of every creative work, short or long:  what does this mean?  What does it mean that there’s a creature called a wolverine on this planet?  What does it mean to get cancer?  What does it mean to lose a child?  What does hate mean?  An essay is a map of the trail a writer takes in pursuing her question.  The question is unanswerable, or it has a myriad of correct answers.  Or its answer is “none of the above.”  A mind following such a map to its edge, to where the map ends, is a mind changed in the process, and that’s what the essay records.  So I started with a question.

The question at the heart of Into Great Silence was “What does it mean that the Chugach transient orcas, the animals I have been studying for half my life, are going extinct?  How can I possibly live with this?  Can I personalize this extinction so a reader understands on a gut level what we’re facing? Takes personally the fact that we exist in what some call a new age of extinctions?  Can I turn a scientific study into art?  And can I do this without my book being a total downer?  You can see already questions generating more questions, which is what happens both in literature and in science.

The prospect of writing book-length narrative non-fiction scared me.  For one thing, I didn’t trust linear narrative (or my ability to write it engagingly).  Chronologically may be the way we live, careening horizontally from moment to moment.  But how we make sense of what we’ve lived, on the page, is vertical, coiling its way down and around itself.  Actually, it’s not even vertical.  The map of the mind, essaying, is a hologram.  So first, I wrote an essay.  The idea of a book was still taking shape. It was a kind of test run.  The essay failed, mainly because the question proved to be too large for an essay-sized container.  Too many trails on my map led back to the Chugach transient orcas, and I had to walk them all.  The essay contained big gaps, fissures a reader had to leap across.  And it was into these fissures that I had to dive.

So I started at the beginning, twenty-five years back, piling up old journals, field notebooks, data sheets, boat logs.  To write a book-length work, I defied my essayistic impulses.  Once upon a time I was a 23 year-old … and then, and then … (But of course, the true beginning of the book announced itself much, much later, and had nothing to do with time.)

As memoirist and poet Judith Barrington writes, for a reader, “and then, and then” is not like running on a wilderness trail, but a treadmill. And I wanted my reader to run with me through Prince William Sound.  So each chapter became an essay unto itself, and gradually, the chapters piled up, each new one changing the ones underneath. To employ another metaphor: It was like hanging laundry on a line. First this pinned up, then that.  Each piece of clothing separated by a little blank space.  No double-pinning.  And watching the shape change as the laundry accrued.  And always the steady, dependable line paying out, the chronology, the storyline from which the chapters hung, the narrative of 24 years.  Between them, space (spans of time, incidents not narrated, silence, the unspeakable).

I sat down each day, skimmed through another journal, another folder of notes, in that way, working in a dogged style, bowing to the god of chronology.  Yet all the while, the essayist inside me pushed the questions.  I read Whitman, Li-Young Lee, Barry Lopez, Gretel Ehrlich, John Cage. Fat paragraphs of thinking swelled the first draft.  (They would be taken out, once they did their work).  I had no idea how this thing would end.  I had no idea what it all meant.  But I’d written enough essays to trust the process, that it would lead to the magical, hands-down best part of writing for me, the alchemy of all that work, when the trail-running, back-tracking, accruing, thinking, reading, suddenly coalesces. The branch breaks.  A sentence appears on the page that says, “This is where you are heading.”  It’s the sense of an ending.  The heart pounds.  You know you just have to reach that place, just off the edge of the map you’ve been following.  And now you know what you still need to write.  And what you can cut out.  Now you understand the book’s intrinsic shape.

I know exactly where I was when this happened with Into Great Silence.  I was at my friends’ kitchen table in Cordova.  It was storming out.  I had just seen, for the first time, the rearticulated skeleton of the Chugach transient whale I knew as Eyak.

What news, what relief, that the sense of an ending functions in precisely the same way in a book-length narrative, or in an individual essay (or in a poem).  Perhaps all art forms involve the same leap of faith, the same depth of commitment, the same fidelity, not to genre, but to the search for meaning.

What satisfaction.  What responsibility.  For in a writer’s life, the ending is also the place where the old map becomes irrelevant, where fresh questions wait.  And a new work – whether it’s poetry, essay, or story – begins.

Eva Saulitis is the author of three books, the most recent of which, Into Great Silence: A Memoir of Discovery and Loss Among Vanishing Orcas, was published this month by Beacon Press.  She teaches in UAA’s low-residency MFA program and at the Kachemak Bay Campus, in Homer.

2 thoughts on “Eva Saulitis: On Writing the Book-Length Memoir”