Joan Kane is Inupiaq with family from King Island and Mary’s Igloo, Alaska. She earned her bachelor’s degree from Harvard College and her MFA from Columbia University. Kane’s awards include a 2007 individual artist award from the Rasmuson Foundation, a 2009 Connie Boochever Fellowship from the Alaska State Council on the Arts, a National Native Creative Development Program grant, and a Whiting Writers’ Award for her first book, The Cormorant Hunter’s Wife. She received the 2012 Donald Hall Prize for her second book, Hyperboreal. She is recipient of the 2013 Native Arts and Cultures Foundation Literature Fellowship, the 2013 Creative Vision Award from United States Artists,  and will be the 2014 Indigenous Writer in Residence at the School for Advanced Research and faculty for the MFA program at the Institute of American Indian Arts. Along with her husband and sons, she lives in Anchorage, Alaska. She is currently fundraising through United States Artists to crowdsource an important project, Ugiuvaŋmiuguruŋa, that would take her and others to her remote and now-uninhabited ancestral home for the first time.

The upcoming book includes your poem “Disappearer”, which begins with an epigraph by Lisa Stevenson that says “Disappearance, extinction, the inability to survive as a race—these are the anxieties of an Inuit modernity. They lie at the fuzzy border between cultural and biological extinction.” To what extent does that anxiety inform your work, your parenting, your desire to finally reach King Island for the first time?

With the recent death of Helen Pushruk, my grandfather’s sister, there is only one King Islander remaining alive from the generation in which people lived complete subsistence lifestyles and were born and raised and lived on the island. My grandfather did not ever learn to speak (or write) a single word of English. The King Island dialect is so unique and particular that each time we lose people whose first language is in our dialect, whose verbal and conceptual grounding is on King Island itself, we lose a considerable bit of our identity, our culture.
I’m desperate to bring my children, along with our cousins and aunts and uncles and other relatives, to the island so that their identity can be affirmed at an early age. I want their existence to be informed by the very harsh and very beautiful environment that our ancestors and family survived and thrived in for thousands of years. I don’t want a momentary set of policy decisions by the federal government last century to defeat any chances of King Islanders from being fully self-determined in the present and future. To my mind, that self-determination
needs to be contextualized in the notion of “selfhood” that is informed by the home that our mothers and aunts and uncles and others grew up in and knew.
I mention Helen not just because her passing was deeply sorrowful for our community and family. I mention it also because she was very patient in teaching me highly specific things about our dialect. She and her husband Simon Pushruk used to help raise me at their house at Heintzelman projects in downtown Anchorage. I try to keep up a lot of translation  work. I researched the word kavitagzaqtaaŋa for a long time—finally I asked her. It is a word that refers to the sound the wind makes as it shakes/slams against a seal intestine window in the entry to a house at King Island. If she hadn’t told me, I don’t know who would have. So many elders and other fully bilingual did not remember but her recollection was invaluable on and opened doors to other memories about such words from other speakers of the King Island dialect.
My work is written both out of an urgency to record this knowledge before it is lost, but more than simply being documentarian, I write poems and plays and now fiction, because I am interested in the role that language – transmission, publication, preservation, voice, perspective – plays in cultural survival. Words are very powerful. 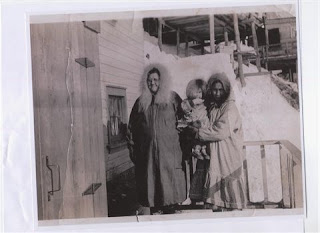 The world of your poems is a very physical and placed world. The sense of both real and imagined landscapes
permeates your poems. How important is place to your identity and process?

Absolutely critical. Words are powerful. Places are powerful. Identity, for me, is informed by my place in the context of a cultural and physical landscape. King Island itself has been wholly inaccessible to me so far in my life because of the now-mindboggling logistics of getting
there. I can see it from Nome, from Cape Woolley, from the Teller Road outside of Nome. I have been told in such detail about its houses and buildings and clubhouses and places to pick greens and how my mother played as a child; it is so vivid to me. But I have never been there. That feels like a huge blind spot in my construction of a self, and always has. I have seen and heard and witnessed the trauma relocation has had on us as King Islanders. Going back isn’t going to erase that trauma, but is a necessary part in moving forward and having a complete sense of identity, of coming to terms with the terrible and persistent trauma that Native people experience on a daily basis as a colonized people.
How did your long stint away from Alaska in Boston and New York affect your identity and process as a poet, and how did coming home influence your work?
I was homesick. My first book of poems was nostalgic and yearning. I have always yearned for King Island but living in NYC through 9/11, subway strikes, blackouts, and being part of a truly egalitarian and anonymous urban setting was necessary to me in so many ways. Luckily I got to come home and go to Shishmaref and Nome during the summers and every chance I could get. I needed, too, some distance from being here in Anchorage. I decided to leave Anchorage in the winter of 2000-2001; after the painful winter, the winter when Della Brown was raped and murdered, the winter when so many Native women were attacked and assaulted. I had never felt more vulnerable and unsafe as a Native woman in this city. The statistics certainly uphold that. I couldn’t live here and create. I couldn’t live here and witness this continuing trauma and devastation of our people.
I moved back and just about within a year my uncle was killed in a hit and run accident. The police finally found the man who murdered him, but the only thing that resulted was the revocation of his license. My uncle’s death was very hard on my family. My first son is named for him. I began to feel a complete responsibility to my son after my uncle died – when I was about three months pregnant. I began to feel a sense of responsibility as a mother to begin righting the wrongs and looking to a time when we as Native people, as King Island people, take a proactive role in furthering our self-determination.
How have other King Islanders and your Inupiaq community reacted to your work and your current efforts to reach King
Island?

I was elected to the Board of Directors of the King Island Native Corporation a few weeks ago. This demonstrated to me a sense of real support for the vision of us as King Islanders responding to relocation and assimilation. It is our home, together. It is part of our collective identity. Many relatives and others in Nome and elsewhere are eager to join me on the trip, especially the aspect of bringing our children. This is our future. So many King Islanders are homeless – not just literally, in Nome and Anchorage and Fairbanks and Portland and Seattle – but culturally. Luckily our language and dialect are still alive. Luckily, I am alive. We have one of the most phenomenal groups of traditional dancers and drummers. We also have generations of people who haven’t been home or anywhere near it for three or four or five
decades since we were forcibly relocated off the island. It is time to go home, symbolically, as a way of paying due tribute to the sacrifices our ancestors made for us to exist and live today. And in actuality, so that this aspect of our identity is not lost to future generations. 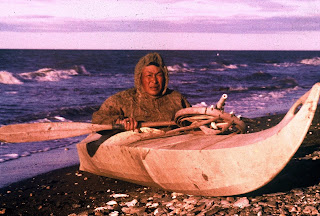 How does the upcoming Hyperboreal differ from your debut Cormorant Hunter’s Wife? What are you working on now, and what directions will a trip to King Island take you and your writing?
Hyperboreal was written in its entirety after I returned home to Alaska. Since moving back, I have worked at the very high policy level as Director of the Alaska Native Policy Center at First Alaskans Institute, at the Denali Commission in looking at some of the existing decisions to situate or evaluate communities’ responses to current federal programs, at the corporate level working for another of my village corporations, and very fortunately, on the personal level as I’ve traveled extensively in Arctic Slope, Bering Straits and NW Arctic regions. The book is much more accessible, less nostalgic, and more proactive in engaging questions of identity, language, and memory.
I just finished a third manuscript of poetry, When the World was Milk. I have started a novel that is preoccupied, right now, at looking at the real implications of the Alaska Native Claims Settlement Act. My novel and next manuscript will draw heavily on returning to King Island. For my whole life, I have wanted to go there. My writing and professional careers have made possible trips internationally and within the US – and in Indian Country. I see tremendous creative and cultural potential in helping King Islanders return home.
Can you comment on your forays into other genres, and perhaps about the particular way that poetry seems to be a home for you as a writer?
With two young kids, poems have been the easiest to write in terms of my time and training. Poems don’t presume having all of the answers. My poems do raise a lot of questions and give breathing room in interstitial spaces. Poetry is home for me in those formal and personal contexts. The plays have been a real challenge, not just bringing them into being on the page, but on stage as well. The novel is taking so much time. I think all of these other genres have strengthened my poetry writing. But it takes a lot for people to get to poetry. Maybe these
other works – the novel, the plays – can help readers get a bit more comfortable with my voice and vision and artistic efforts.
For more information about the Ugiuvaŋmiuguruŋa, or to donate, visit: http://www.usaprojects.org/project/ugiuva_miuguru_a_i_am_from_king_island
Also, for a great chance to hear Joan and others speak about King Island, stream this story from KNOM’s May 9th news broadcast, beginning at 2:44.
Jeremy Pataky is a poet and writer based in Anchorage and McCarthy, and a 49 Writers board member.
Views: 38