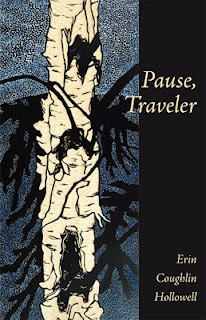 Parts of Speech
The cloud speaks all in sibilance
to the moon. To the mountain,
it clanks together consonants
like old cowbells. All day
I have tried to hold still
long enough to listen.
There is a story
in the way my skin unfurls
when I’ve locked away industry.
It has some of the same words
that the cloud has, but without
direction – I’ve discarded verbs.
Alder columbine stone moss.
Fingertip thigh nape lip.
(Pause, Traveler
by Erin Coughlin Hollowell)
Pause, Traveler is
a journey from New York City to Alaska, through the dark heart of the American
landscape. These poems search for redemption in the most unlikely places,
Circus World Museum, an Iceworm Festival, or a frozen gas station in Alaska.
Traversing the difficult terrain of damaged relationships and misplaced
affection, this collection finds hope in the fractured beauty of the world.
“There is a place
where conversation ends. / Where a person becomes a locked door, Erin
Coughlin Hollowell writes. And I think, yes,
exactly, because this is where her poems pick up, dusting the outline of
things left unsaid or unsayable.  Densely
packed as glacial ice, her short lines carry weight of many worlds—the charged
desire and loneliness of a New York subway, the stale coffee of a South Dakota
truck stop, a woman in a family photo who smells of breast milk, maples leaves / and the dirty fingerprints of boys.  Finally, we are led home to a place alive
with sandhill cranes and kelp and sea lions.
Here you have a woman who has traveled far and has paid attention.  I am grateful to be able to journey with
her.”
—Nickole Brown
Erin Coughlin Hollowell is a poet and writer who lives at the end of the road in Homer,
Alaska. Prior to landing in Alaska thirteen years ago, she lived on both
coasts, in big cities and small towns, pursuing many different professions from
tapestry weaving to arts administration. She is a member of 49 Writers. She earned her MFA from the Rainier Writing Workshop at
Pacific Lutheran University in 2009. In 2013, she was selected as a Rasmuson
Foundation Fellowship and a Connie Boochever Fellow. Her work first collection
of poetry Pause, Traveler was released in June 2013 from Boreal Books, an
imprint of Red Hen Press.
Do you have an Alaska title you’d like featured for free here at 49 Writers? Check out our guidelines and submit to our Spotlight on Alaska Books feature!
Views: 10