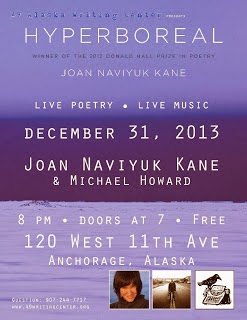 Joan is Inupiaq Eskimo, with family from King Island. Recipient of the John Haines Award from Ice Floe Press, she was a semi-finalist for the Walt Whitman Award and a recipient of the Whiting Award. She has also received multiple awards from the Rasmuson Foundaiton, a fellowship from the Alaska State Council on the Arts, and a Creative Vision Award from United States Artists. Hyperboreal won the 2012 AWP Donald Hall Prize in Poetry.

Thank you to 49 Writers board member Jeremy Pataky for organizing and to Olena Kalytiak Davis for hosting–we can’t think of a better way to see out the old year and welcome the new!