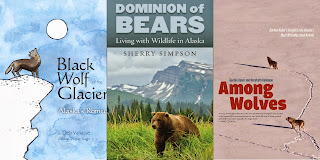 Years ago, I woke with a vivid image in my head: a large
black wolf. I have no idea how that wolf got into my dreams. I didn’t even know
at the time that wolves might be black. The image haunted me. I wanted to write about that wolf.
Fast forward several years. I opened the newspaper to a photo
of my dream-wolf, a black one named Romeo. He lived in ,
at Mendenhall Glacier, and he was famous not only in
but all over the world.
Earlier this year,
the released my book, Black Wolf of the Glacier: ’s Romeo. Several months later, Marybeth
Holleman’s Among Wolves came out,
also from the Press. We traded books and discovered what each had to say about
the social lives of wolves and their interactions with humans.
Then Sherry Simpson’s Dominionof Bears was released, adding fresh perspectives on wildlife here in , where we share natural, urban, and cultural landscapes
with amazing and complex creatures.
How do these animals shape our
ideas about wilderness and identity? In what ways do the creatures that inhabit
our imaginations differ from the ones that inhabit our lives? What can we learn
from the passion and wonder of those who dedicate themselves to the study of
wildlife? In our work, each of us had pondered these questions.
Together, the three of us have assembled an
hour-long presentation in which we’ll share thoughts and passages from our
books. We hope you’ll join us tomorrow night, Tuesday, Dec. 3, at at the at Rasmuson for this lively, free event. Book sales and
signings will follow. Autographed books make great holiday gifts!
Deb Vanasse is the author
of several books for children and adults, including the Junior Literary Guild
selection A Distant Enemy and
Books Totem Tale and Lucy’s Dance. Her twelfth book, Black Wolf of the Glacier,
is a 2013 release by the .
Marybeth Holleman is author of The
Heart of the Sound, co-author
of Among Wolves, and
co-editor of Crosscurrents North. Her
essays, poems, and articles have appeared in dozens of journals,
magazines, and anthologies.
Sherry Simpson is the author
of Dominion of Bears: Living with Wildlife in Alaska and two collections of essays, The
Accidental Explorer and The Way Winter Comes, which won the
inaugural Chinook Literary Prize. Her work has appeared in numerous magazines,
journals and anthologies.
Views: 20

1 thought on “Deb: Wild Dominion: Three Alaska Authors on the Wildlife Around Us”