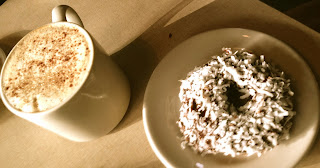 For December this year, we’ve decided to run the top four most popular posts from our annual lineup of guest authors. Coming in at number 4 is November writer, Sara Loewen from Kodiak, with her final post. If you missed this the first time around, it’s well worth reading. Thank you, Sara, for your thoughtful and thought-provoking contributions this year.

I’ve been setting my alarm an hour or two earlier every day to carve out more writing time. Five days into my new habit, it’s hard to say whether I’m motivated more by word count or by the promise of coffee.

As Iris Murdoch said, “One of the secrets of a happy life is continuous small treats.”

I’d heard that it takes three weeks to form a habit, but a quick Internet search refuted the whole 21 days claim. Still, I thought I remembered a specific number of hours-to-proficiency. Here it is (from Malcolm Gladwell’s Outliers: The Story of Success): “for true expertise: ten thousand hours of practice is required to achieve the level of mastery associated with being a world-class expert—in anything.”

As long as I stick to my morning writing routine, I should produce something really good 27 years from now.

Looking through a few books on writerly habits, the best ideas I’ve found are probably these 3W’s: waking up early, walking, and word count. For today’s writers I might add: avoiding that other www.

Mason Currey asks in Daily Rituals: How Artists Work—“How do you do meaningful creative work while also earning a living? Is it better to devote yourself wholly to a project or to set aside a small portion of each day?”

And when that isn’t actually a choice, how best to nurture a creative writing life?

In a recent interview in the Georgia Review, Julie Riddle said, “If I wrote when I felt like it—when I felt mentally sharp, energized and inspired—I would rarely write. I’ve learned that if I sit down each day and just start, regardless of how I feel, good things will happen.”

I’m feeling hopeful about the potential of writing before sunrise after reading about so many morning writers: Edith Wharton, Sylvia Plath, Ray Bradbury, W.H. Auden, Virginia Woolf, William Stafford, Wallace Stegner. I’d like to see a display of all the books written while other people were sleeping.

It’s encouraging to remember that slow and steady progress is exactly that—progress.

Joyce Carol Oates is a prolific writer, but she points out that even if all she keeps from a full day of writing is a single page, single pages add up over the years.

Gertrude Stein thought half an hour a day was enough writing time. Flannery O’Connor’s routine was to write for three hours daily with the goal of three good pages. Henry Miller wrote for two or three hours each morning, as did Willa Cather and W.B. Yeats. Yeats, a slow writer, said he never did more than five or six good lines a day.

After time and discipline, walking was most often mentioned as a complementary writing habit. Robert Louis Stevenson, Virginia Woolf, Henry David Thoreau, Robert Frost, Yeats, Charles Dickens, and William Wordsworth all relied on walks to enrich their creativity. Wallace Stevens composed poetry walking to and from work and often walked through his lunch hour as well.

As an added incentive, studies show that spending even twenty minutes outside in good weather (what does that mean in Alaska?) leads to better working memory and moods.

I find that once I’ve started an essay, I carry it with me—revising in the car or the shower or at work. I think about it when I exercise too, that just happens less often.

“Once your unconscious mind has really begun to focus on a given project…things that fit your project seem to pop up everywhere you look. Suddenly, the world seems to overflow with what you need,” writes Stephen Koch, in The Modern Library Writer’s Workshop.

He also writes about the value of a daily word quota—calling it the next best thing to an enforceable deadline.

Somerset Maugham set himself a daily requirement of about 1,000 words. Steven King suggests at least 2,000. Mary Karr makes herself to write a page and half or to work for six hours, whichever comes first. Tom Wolfe set his quota at ten pages a day, triple spaced. If he finished in three hours, he could call it a day. “If it takes me twelve hours, that’s too bad, I’ve got to do it,” Wolfe said.

Here’s the thing. To write November’s weekly posts, I haven’t been taking walks. I’m not a fast writer; when I have a deadline I usually choose to trade that time for obsessive revising. I may never set a word quota. For now, it’s enough to force myself out of bed and down to the glow of the laptop on the kitchen table.

My new morning writing habit may not lead to a finished essay before 2014, but it does ease the ache of not writing. As we enter the darkest month of the year and this season of giving thanks, it helps me start the day in a spirit of gratitude—for words, for an hour of quiet, and for a cup of strong coffee.

Sara Loewen’s first book, Gaining Daylight: Life on Two Islands, was published by the UA Press in February. She received her MFA in creative writing from the UAA Low-Residency Program in 2011. Sara works at Kodiak College and fishes commercially for salmon each summer with her family in Uyak Bay.