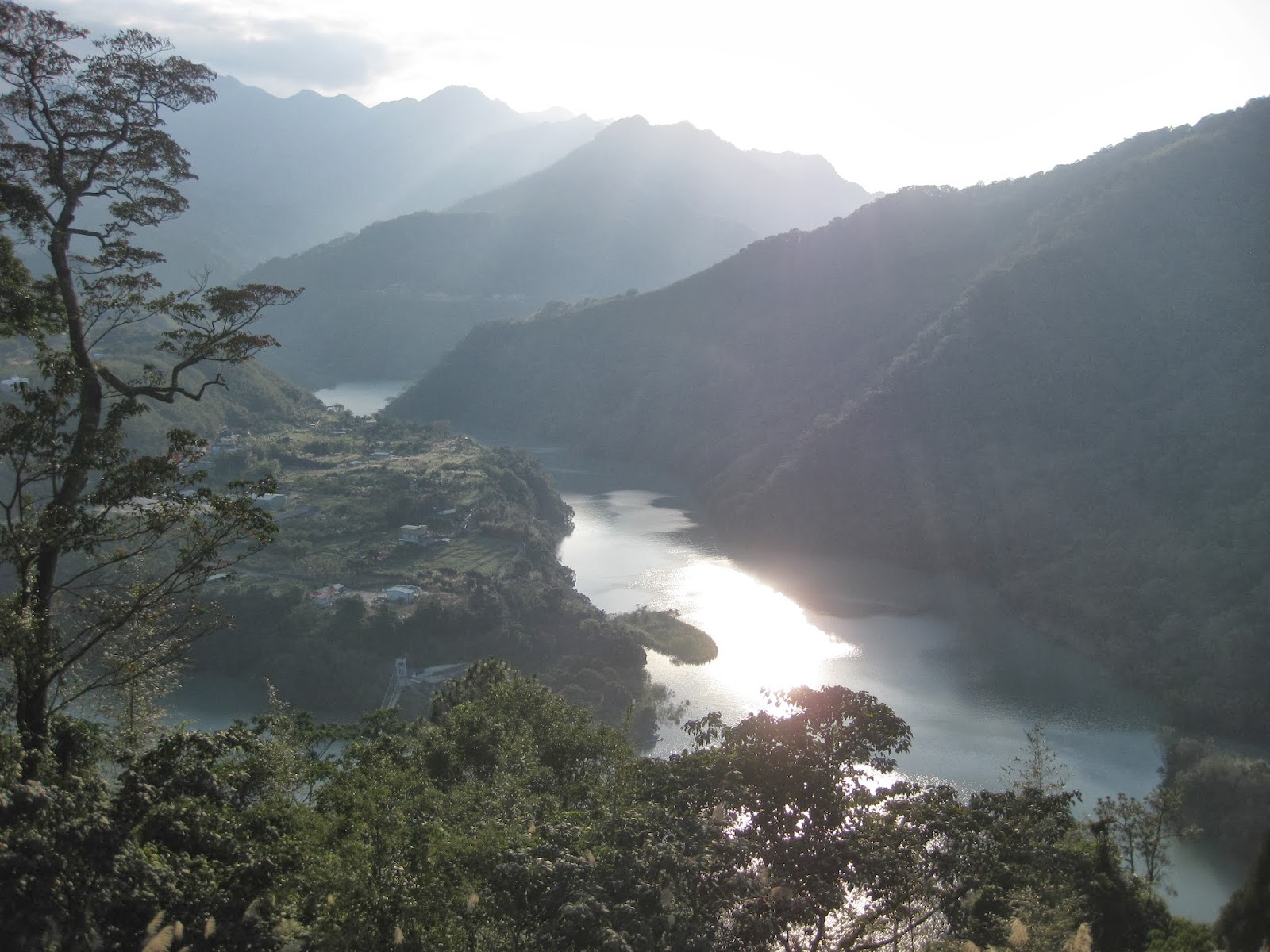 One month ago, we moved to a tiny village in the mountains of northern Taiwan, where my husband snagged a short-term English teaching position. It’s a place of jade-colored mountains and pink-blossomed cherry trees, parks and trails, tea stalls and fried mushrooms stands, and mosaics and murals in honor of the aboriginal Tayal culture. In other words, it’s incredible. And one of the most baffling, exhausting experiences of my life.

Stay with me for a moment here. I’m going to talk about Mandarin first, but I’ll be getting soon to the subject of learning to write, especially learning to write novels. The two subjects, Mandarin and novel-writing mastery, intersect at that question of “how do we learn to do new, cognitively complex things?” which continues to pleasurably obsess me. (I’m a long-time fan of the expertise acquisition research popularized by Malcolm Gladwell and Homer’s own Dan Coyle–research that actually goes back decades, to studies in the 1970s and ’80s about chess masters and composers.)

There’s no better time to think about learning than when you’re in the Land of the Complete Unknown, as I’ve decided to call those moments when we board a bus, can’t speak to the driver, don’t know exactly where we’re going or how to transfer to unknown point #B once we get there, in order to find some thing or solve some problem that is the focus of the present moment’s adventure. (Some version of this happens every day, whether the quarry is good cheese or a new phone SIM card.)

This is what most of our days looked like for the first week or two: utterly unfamiliar and inscrutable.

After a while, things started to make sense. The Mandarin characters above became pin-yin: Hen gao xing renshi ni. I thought, I can handle that. (It means “pleased to meet you,” by the way.) My husband, daughter and I memorized the sounds each Romanized letter makes; we memorized words and phrases. Only to find out that no one could understand us at all. No, even more confusing that: one moment we’d say a word and see instant recognition in a neighbor’s face, then try to use the same word and phrase later with no success. We were getting something slightly wrong, repeatedly, more than 90 percent of the time. (If you’re a writer working on multiple drafts or sending out queries to agents, this failure rate will not be unfamiliar.)

What puzzled us most was that we’d had little trouble in the other Asian countries we’d visited recently, and were often able to handle the basics of ordering food, counting money, and saying hello and thanks within days. How could Mandarin be, at the beginning at least, so much harder?

Sometime during week two or three, we realized we couldn’t keep ignoring those little accent symbols over the words. They indicate tones. Mandarin has four main ones. When we finally started paying attention to and practicing the tones, which radically change many words’ meanings, we started saying a few words people could actually understand. Joy! That decision to backtrack a step, to realize we couldn’t just memorize the part of words that were comfortable to us (vowels, consonants) and then spit them out as fast as possible, hoping for the best, is essential. It’s the same kind of pausing and reconsidering that intermediate writers know they must do, when they make the leap from early enthusiasm to true dedication.

Yes, you can write a short story or essay, especially the first part, on a burning blaze of inspiration, laying down the words as they come to you (research suggests this is what most novice writers do, expending less effort in planning and cogitating and perceived effort than more seasoned writers do), but then you hit some midpoint. The story loses its way. The ending fizzles. The emotions don’t come across. The ambiguity, which you hoped might resemble the gloss of genius in others’ works, simply confuses. The longer the piece of writing, the more this hurts. It is possible to write an entire novel that almost works, but in the end, doesn’t. No matter how hard you held your breath and barreled ahead, you were missing something–that final tool or skill or insight to make the thing function. Yes, you can keep stirring the pot (and calling it “revision”) but if you’re still misunderstanding something very basic about how stories, essays, and novels come alive in the minds of readers, it won’t get much better. You can polish and polish until you’re left with dust.

In writing, we often have to put the brakes on “first thought” or “good enough” or “almost there” and figure out what the heck we’re doing wrong, repeatedly. In the case of Mandarin, my family and I had to take a much closer look at tones. But even after finding lots of fun apps for tone practice, we still kept making mistakes.

To use as an example a word that all three of us kept mispronouncing just last night, to the howls of our volunteer Mandarin teachers (three wonderful, funny, locally-based Army guys who hang out in our living room and trade language lessons twice a week), the word xiguan said using tone #2 and #4 means “to be accustomed to.” The same word using tones #1 and #3 means “drinking straw.” Our three Mandarin coaches said the two versions over and over, and for the most part, we couldn’t even hear the differences. They’d say the word. We’d repeat, get it wrong and wrong and wrong, then finally right. Then wrong again. The conversation we were reading from our child-level textbook came to a halt. We moved on to some other words we couldn’t say before, which started to come out better, but only a little.

We’ll keep practicing and see them again next Tuesday. Thank goodness we have coaches to redirect us, to make the practice meaningful, or we’d be in an endless feedback loop of error.

Connection to one study I happened to read today, in which it was found that eighty percent of master and above-level chess players use coaches. Also, the ability of those expert chess players can be correlated very closely with how many chess books they’ve read, in order to study other chess players’ moves.

Connection to Mandarin, and also the work of Gladwell and Coyle: you need practice and feedback and correction–quick, meaningful correction, from editors or teachers or qualified peers. Connection to writing and to chess: soaking up a lot of advice from craft books doesn’t hurt either. Craft books aren’t enough, of course. You have to know your domain: the masterworks that were written before you. Connection back to Mandarin: it’s gonna take some time. And not just time. It’s going to take discipline, and ritual, and rewards, and social reinforcing. (You really want those fried mushrooms? Well, ask for them in Mandarin this time!)

One of the biggest rewards is not the mushrooms, actually–as good as they are. It’s when the clouds figuratively part, and suddenly, we hear some words or read characters on a sign — and they are familiar. From a sea of noise, individual words come to the surface. From a pretty but perplexing mass of lines, individual characters with phonic and semantic relevance emerge.  On a sign, we read the words for “mountain” or “exit” or “chicken.” On a bus, we hear someone say “I am happy.” The chaos is becoming meaningful chunks that will find a place in our short-term, and later long-term, memories. The world is beginning to make sense!

That’s the same excitement I get when I read a novel for the second or third time and start to comprehend it not just as evocative language or sequential incidents, but as a limited number of acts or scenes, a shaped storyline, an incredibly selective string of revelations, a larger pattern of some kind. Once the novel becomes a limited series of “chunks,” (the term also used for multiple chess pieces that can be memorized and mentally manipulated more easily as a group), I can hold it more clearly in my head, turn it around and study it, think about how certain parts could have been written differently. I can think about how it relates to the literature of the past, and I hope, relates to the novel I am supposed to be working on at this very moment.

All right, my day’s writing tasks and my day’s Mandarin lessons await. (Not chess, thank goodness. My brain hurts already.)

Let me ask you:

How do you get the quick feedback or coaching you require as a writer–and have you experienced any cognitive break-throughs lately?

Andromeda Romano-Lax is the author of The Spanish Bow and The Detour. She is a co-founder of 49 Writers and teaches fiction in the low-residency MFA program at UAA. She also offers freelance manuscript critique and book coaching services. Contact her at aromanolax@gmail.com for more information.

2 thoughts on “Andromeda/Alaska Writer on the Road: Mandarin, Chess, Novel Writing, and Other Things That Make Sense–Eventually”