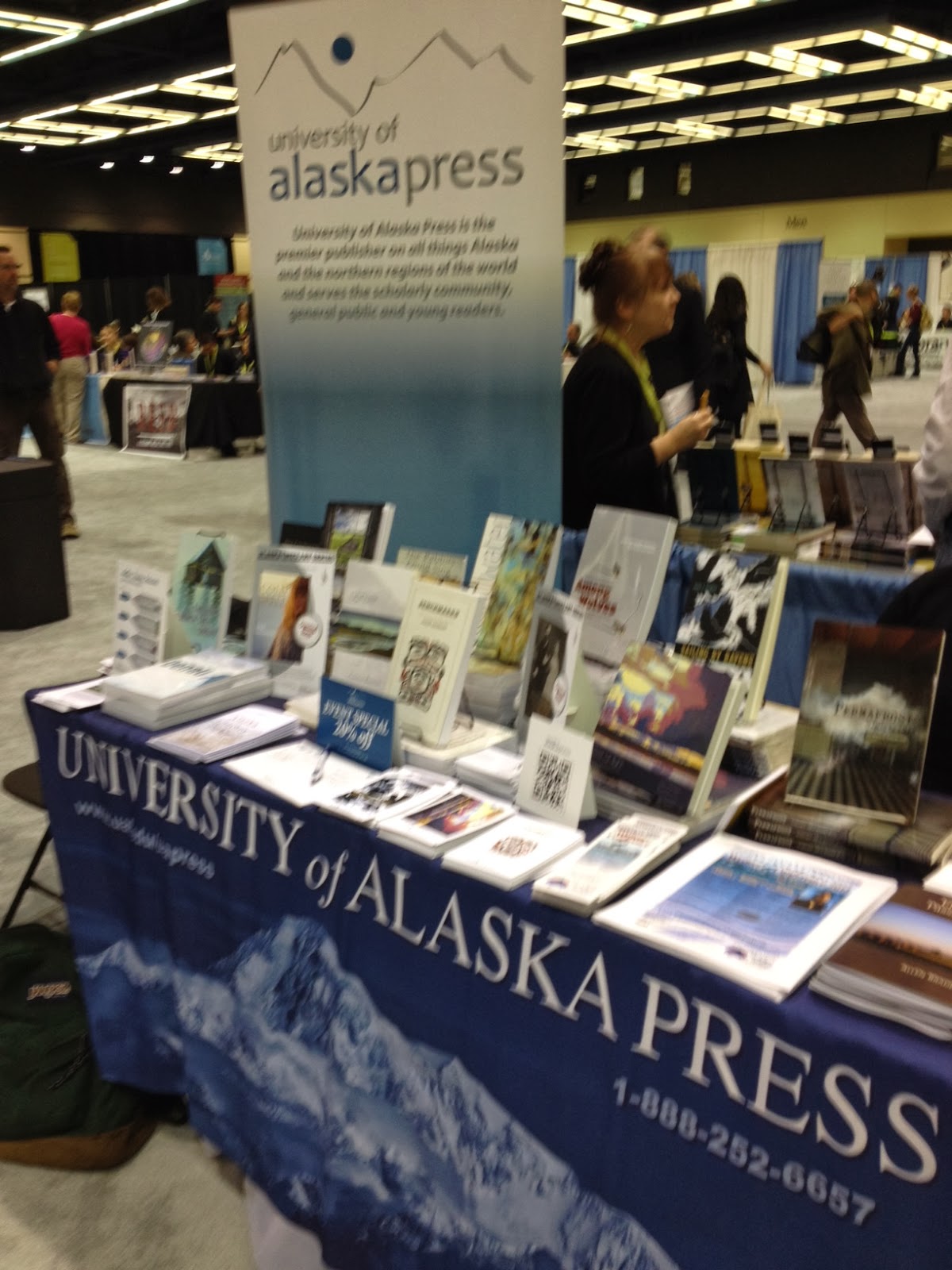 Thursday was
Alaska day at AWP with a series of panel discussions and readings featuring
Alaskan authors and publishers. Whether or not you agree that Alaska is
currently in the midst of a “Literary Rennaissance” (sort of implies there was
a dark ages) there’s no question that Alaska writing is hot right now.

Publishing Local in the Last Frontier, hosted by VP&D House publisher
Vered Mares, featured discussion about small press publishing along with author
readings from Kris Farmen, Buffy McKay, and Martha Amore of Weathered Edge. In just four years of
publishing, VP&D House has published nine titles in multiple genres,
supporting and promoting Alaskan authors. Mares feels it’s important to
establish a partnership and shared vision with her writers. Small presses can give
writers a real advantage and focus on the quality of the work. A supportive
local publisher ultimately might work harder for you and help you establish a
strong local market for your work. Kris Farmen, Martha Amore, and Buffy McKay each
gave their perspective on working directly with Mares through the entire
process from editing, design, and marketing. While Mares, who acts as editor as
well as publisher, wanted each of the writers to maintain their voice, to begin
the book process they discussed themes and read and critiqued each others first
drafts. The success of Weathered Edge
has sparked interest in publishing another novella collection. Keep your eye on
this uniquely Alaskan small press.

True North: Alaska Literary Nonfiction, featured readings and a panel
discussion by Alaskan authors Christine Byl, Nancy Lord, Sherry Simpson,
Ernestine Hayes, and Tom Kizzia. Nature is a big part of what Alaskan’s write
about, and each writer’s work featured a strong sense of place. Panelists
compared the current fascination with Alaska, (evidenced in part by a slew of
reality TV shows with Alaska as the central character), to the strong growth of
nonfiction writing coming in the state. This presents a paradox for Alaskan
nonfiction writers as they draw upon established ideas about Alaska while also
attempting to counter them with real life narratives. Alaskan writing isn’t
just a regional literature that only belongs in Alaska, but has universal
interest.

I rounded out my
afternoon with Alaska Voices: A Reading
by Alaska Literary Series Authors, which included Sara Loewen reading from
her memoir Gaining Daylight, Mei Mei
Evans reading from her novel Oil &
Water, Holly Huges from her poetry collection Sailing by Ravens, and John Morgan reading from his book length
poem River of Light. The packed room
sat rapt through Loewen’s childhood in Old Harbor and the bittersweet memories
of her childhood friend named December, Morgan’s raft trip down the Copper
River with the Indian mystic poet Kabir as his spiritual guide, Evan’s
fictional retelling of the Exxon Valdez oil spill, and Hughes skillful
navigation through Alaskan waters. The literary series is part of University of
Alaska Press and was spearheaded by former Alaska Writer Laureate Peggy
Shumaker, who is also the series editor.
Made me proud to
be among the writer’s from the 49th state. Way to represent,
Alaskans!
Views: 16