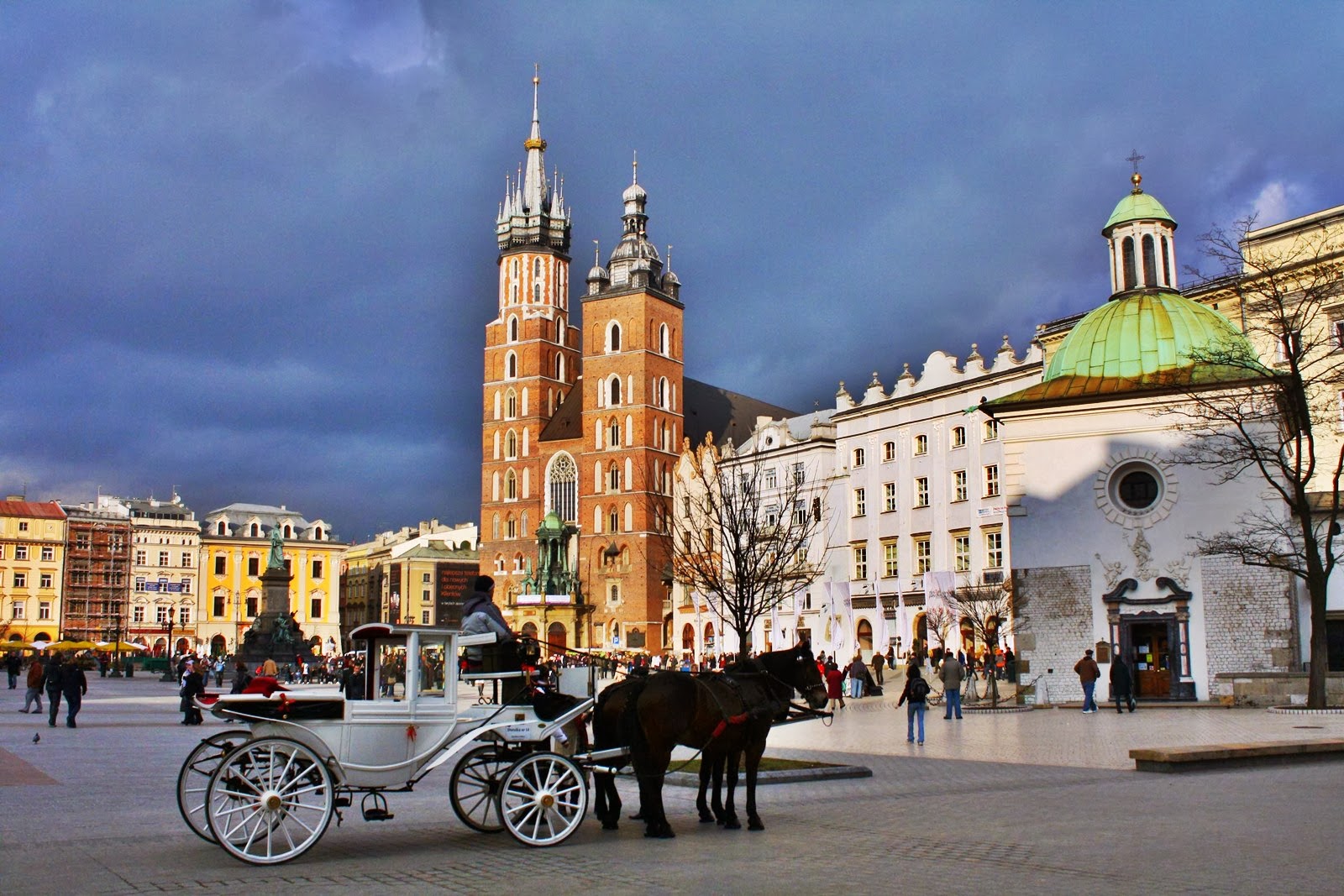 For the next six months or more, I’ll be
living solo in Krakow, Poland. I don’t know a single person in Poland and have
never been. As a destination, it hardly makes anyone’s top-twenty travel list,
though it’s bordered by seven countries, including Ukraine.

I seem to be drawn to countries with
cataclysmic and tragic histories, where writers and poets write out of great
sense of loss and deep despair as the world around them is being torn apart. Most
of my time abroad has been spent in Russia—in the lesser-known regions—Chuvashia, Magadan, and in ancient towns along the
Volga. But I’m not going to say much to the Poles about this Russian part.

Most people dream first of Rome, Prague,
or Paris before they would ever consider riding the rails into Krakow.

Paul Theroux, in The Tao of
Travel,
writes about the pleasure of railways. He says that every airplane trip is the
same; every railway journey is different.
The rail traveler is often companionable, talkative, even somewhat liberated
because they can walk around, un-tethered, and can therefore participate in
more memorable conversations among strangers can result. This is something I’m
looking forward to.

With a family surname of “Witkowski” (Anglicized to Willowski) I
have naturally been thinking about Polska for a long time. This week, a friend
asked me, “Will you be writing a kind of Eat,
Pray, Love story?”

“You mean, an Eat, Pray, Pierogi story?” I answered.

Truth is, I don’t yet know what it is
I’m going to write. But moving to this old capital city on the upper banks of
the Vistula River feels right.

As writers, we are born to enter the
abyss of uncertainty. In this dark cloud of “unknowing,” we confront our
loneliness, seize our fears, and try and heal our inner wounds. We may not have
a crystal clear idea about our next project, but that doesn’t matter. We trust
our instincts. The best work doesn’t often originate from an outline, a plan, a
check-list of goals and objectives, or a well-articulated concept.

A different approach is called for. We put
on our “field eyes,” as Eva Saulitis recently said on stage in a packed
ballroom at AWP. We move around in the wonder of it all. We listen and we
write.

Some writers wander through the coves of
Prince William Sound. Others climb all over the Chugach Mountains. Some of us become
Merchant Marines, or we try out life on a barrier island in North Carolina, or
we wind up in some misty, Taiwanese village writing our next novel. We might reposition
ourselves in the New Mexico heat for a spell. Some of us stay put inside
our cabins near Healy or Kotzebue.

Over the internet, I found a small,
furnished flat—a third-floor, walk-up in an old four-story building. For the
first time in my adult life, I’ll live without a car. The 650 square foot flat
is in the old, slightly run-down Jewish district of Kazimierz, not far from
where Steven Spielberg filmed “Schindler’s List.”

An article from the NYT in 2007 described
it as a place of “peeling facades” and “hauntingly preserved streets” with
trendy jazz clubs and cafes. It’s also home to many synagogues and historical reminders
about the tens of thousands of Kazimierz’s former residents who were rounded up
and taken to Auschwitz. Between 1940-45, an estimated over one million Jews,
and thousands of Polish political prisoners, were deported to
Auschwitz-Birkenau by the Nazis. This largest of all the concentration camps is
one hour by car from Krakow.

Since WWII, Krakow’s reputation as a magnet
for writers and artists has continued to grow. In October 2014, they will host
the 18th international book festival. A very important signifier of the city’s cultural
scene is its newly received title of UNESCO City of Literature.
Krakow is one of 7 designated cities from around the globe, the first
continental and Slavic member as well as the second non-native English speaking
city in the City of Literature network.

Justyna is a young New York woman who’s been living
and working Krakow as staffer for some of the biggest festivals and literary
events. We connected online and exchanged some emails. She tells me there are
major works in play in the effort to open a Literature Forum, a joint
initiative between the City of Krakow and the Małopolska voivodeship (closest
translation: a county).

“It will not be an
institutionalized and stiff space geared to academics and professionals, but
rather a large, interactive arena supporting the 21st century
reader and our youngest recipients of cultural knowledge – children and the youth.

I look forward to this, too, to be re-energized
while surrounded by so many younger writers and artists. Krakow’s population is
about 800,000 and over 130,000 are university students. In his guidebook, Rick
Steves mentions many “atmospheric bars.” It’s my writerly duty to find out what
he means.

As I prepare to become an expatriate myself,
I’d be lying if I told you this is going to be a smooth and easy transition.
The logistics are a nightmare. My desk is covered with Polish guidebooks and
phrasebooks and a boxed set of 9 Polish language CDs which I have yet to open.
I write one to-do list, check it off, and then write ten more lists. Our corroded
water heater broke and leaked a few days ago, and the wet rugs and towels are
still on the garage floor.

And what am I doing? Trying to put
some coherent thoughts down on paper while the words from Billy Joel’s famous
song run through my mind:

“Some folks like to get away, take a holiday
from the neighborhood. Hop a flight to Miami Beach or to Hollywood. But I’m
taking a Greyhound on the Hudson River Line. I’m in a New York state of mind…”

I have always loved this melancholy song.
The singer-songwriter has a deep connection and affection for New York. Whatever
makes the city THE CITY—its energy, its grittiness, its diversity, all the
irreducible parts of its character, he wanted to be in it. The song is about
choosing to be in the essence of New York City instead of escaping with the
hordes to the sunnier and more “desirable” places.

I hope to get to know Poland this way. By
traveling on a bus with its people. And by hopping on trains, hanging out in
the medieval Main Market Square as one of the locals. And by remembering its history
of upheaval.

I’m already in a Krakow state of mind.

Kathleen Tarr is the former Program Coordinator of UAA’s
Low-Residency MFA Program. She’s a long-time Alaskan writer, a fellow at the
Virginia Center for the Creative Arts, and was recently named as a Mullin
Scholar at University of Southern California’s Center for Advanced Catholic
Studies. Her work has appeared in Creative Nonfiction, Alaska Airlines Magazine,
the Sewanee Review, America Magazine, Cirque, TriQuarterly, and in several
anthologies. Her essay, “The Comeback Monk,” is forthcoming in We Are Already
One: Thomas Merton’s Message of Hope, Fons Vitae Press, a volume commemorating
the centennial of Merton’s birth in 2015. Kathleen may be reached at: ktarralaska@gmail.com