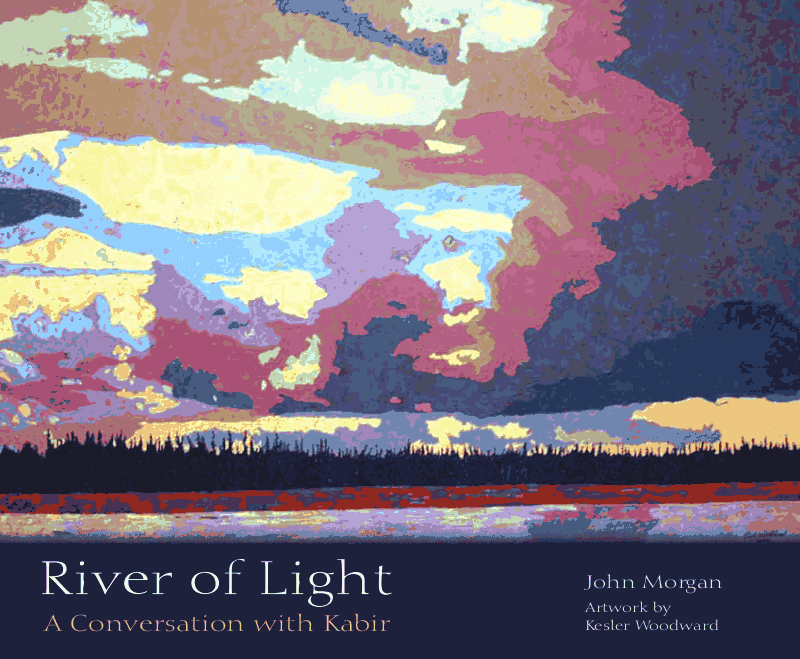 Sun jackknifes into
the river. Elsewhere,
wars blight and innocents die.
The river’s texture of fish-skin,
sparks, and
burbles can breed a harvest
of grief. The month my
mother died,
I plied her with chocolate
determined to
keep her alive. Near the end,
I touched a damp sponge to
her lips, then
squirted some morphine in to soften
the ache as her vital organs
shut down.
How shallow her
breathing. I offered
her orange juice, tilting the glass
and she whispered, “More,” then
“More!”—
her last words
that echo in me
now. My whole life
was a dream, Kabir
declares,
and by god I slept right through it!
*
In no hurry, our patched rafts glide with
the river, drifting from
side
to side.
We can see a gash where boulders
rolled down
the hill, and behind it
glimpse mountains
fractured
in
last year’s quake.
River of Light: A
Conversation with Kabir, by John Morgan with artwork by Kesler Woodward)
John Morgan’s book-length poem, River of Light: A Conversation with Kabir, has just been published
in the Alaska Literary Series by the University of Alaska Press. The poem takes the reader on a week-long raft trip down
a wild river in south-central Alaska. Bears, eagles, moose, seals, otters and
salmon inhabit the poem’s world, and the river’s shifting landscape of
glaciers, mountains, rapids, and waterfalls energizes and enriches its
meditative mood. The trip becomes a spiritual journey as well, since the poem
incorporates commentary by the Indian mystic poet Kabir, who serves as a kind
of mentor for the poem’s narrator. The raft trip described in the poem took
place in 2003, the year of the second Iraq War, so the war is on the narrator’s
mind and becomes a metaphor for the his inner struggles. But the main story of
the poem is the trip itself, as the river’s waves and currents influence the
shaping and pacing of its lines, and the wildlife and scenery provide frequent
surprises for the travelers. The volume includes artwork by the distinguished Alaskan
artist, Kesler Woodward, who participated in the original raft trip and makes
an appearance in the poem.
“This poem by one of
our finest poets draws upon incandescent, creation-laden words to reveal the
‘authentic wilderness’ that flourishes within us and, yes, without us. River of Light dazzles with the pure
pleasure of its passing.” –Michael Waters, editor of Contemporary American Poetry.
“I love the complexity of experience and voice. So many
layers here. The free verse lines are spot-on, capturing both the flow and
layering of the journey’s breath-taking moments.”
—Christianne Balk, winner of the Walt Whitman Award.
John Morgan studied with Robert Lowell at Harvard, where he
won the Hatch Prize for Lyric Poetry.  He
earned his M.F.A at the Iowa Writers Workshop. In 1976, he moved to , where he helped found the Midnight Sun Writers’
Conference and taught for many years at the university. Morgan has published
five books of poetry and a collection of essays. His work has appeared in The
New Yorker, Poetry, APR, The Paris Review, Cirque, The Alaska Quarterly Review,
The New Republic. Morgan was chosen to be the first writer-in-residence at National Park. He has also been a featured
blogger for 49writers. Annie Dillard
writes that his poems “are strong and full of carefully controlled feeling.
They are tender and precise evocations of the moral and sensory life of man.”
For more information check out
Morgan’s website: www.johnmorganpoet.com
River of Light: A
Conversation with Kabir can be purchased at Gulliver’s Books in Fairbanks
and online at Amazon.com. John and Kes Woodward will be speaking at the UAA Bookstore today, April 21, from 5 – 7 pm.
Views: 14

2 thoughts on “Spotlight on Alaska Books: River of Light by John Morgan”