This article, first published in the Juneau Empire on June 26, 2014, is used with permission of the author and Juneau Empire.

You know, there comes a time in everyone’s life where they must balance a rock on their nose and vigorously recite the lines of a play in front of a rowdy bar crowd.

I am fascinated with stagecraft, but am hesitant to commit. A theater production requires a devotion of time difficult to muster. Rehearsals for my life’s one performance, a Second Stage production at Perseverance, left me feeling like I abandoned my wife and first born. Plus, my take on theater people — “those people” — is they’re a little weird; what with the breathing exercises and amorality.

But don’t get me wrong, I love a good play. Theater is visceral. Something about a story acted in the flesh pulls me in deeper than taking a story through the interface of a movie screen or book. Maybe it’s the danger. Theater is unforgiving. Bad acting and bad writing are obvious on a stage. An actor forgets a line, a prop falls, the power goes out, and it’s not like you can do a reshoot. Theater is more risky. Like a high wire act, the draw may be the possibility of a bloody mess.

Risk of carnage aside, to be part of a good play would be deeply satisfying. I had written a short play. I didn’t know if it was any good. A friend suggested I submit to that theater conference in Valdez.

“What theater conference in Valdez?” I thought.

The Last Frontier Theater Conference is an annual event. Some of the country’s most accomplished theater professionals spend eight days in Valdez encouraging some of the country’s best emerging theater professionals. The conference is complex and dense with opportunities. The engineer behind this amazing event is the much-loved Dawson Moore, organizer of Prince William Sound Community College’s theater program. On the conference website, Moore writes “The Last Frontier Theater Conference strives to create an educational experience for playwrights, actors, directors, and theater enthusiasts that enriches participants’ minds and inspires their souls.”

To be at the conference, playwrights must submit a play to Moore. Submissions come from all over the country, the world and, given some of those plays, the cosmos. If the play is worthy, the playwright travels to Valdez. I submitted my play. It was accepted. And so, my gut a writhing snake pit of anxieties, contradictions and issues, I spent a week with “those people” at The Last Frontier Theater Conference. 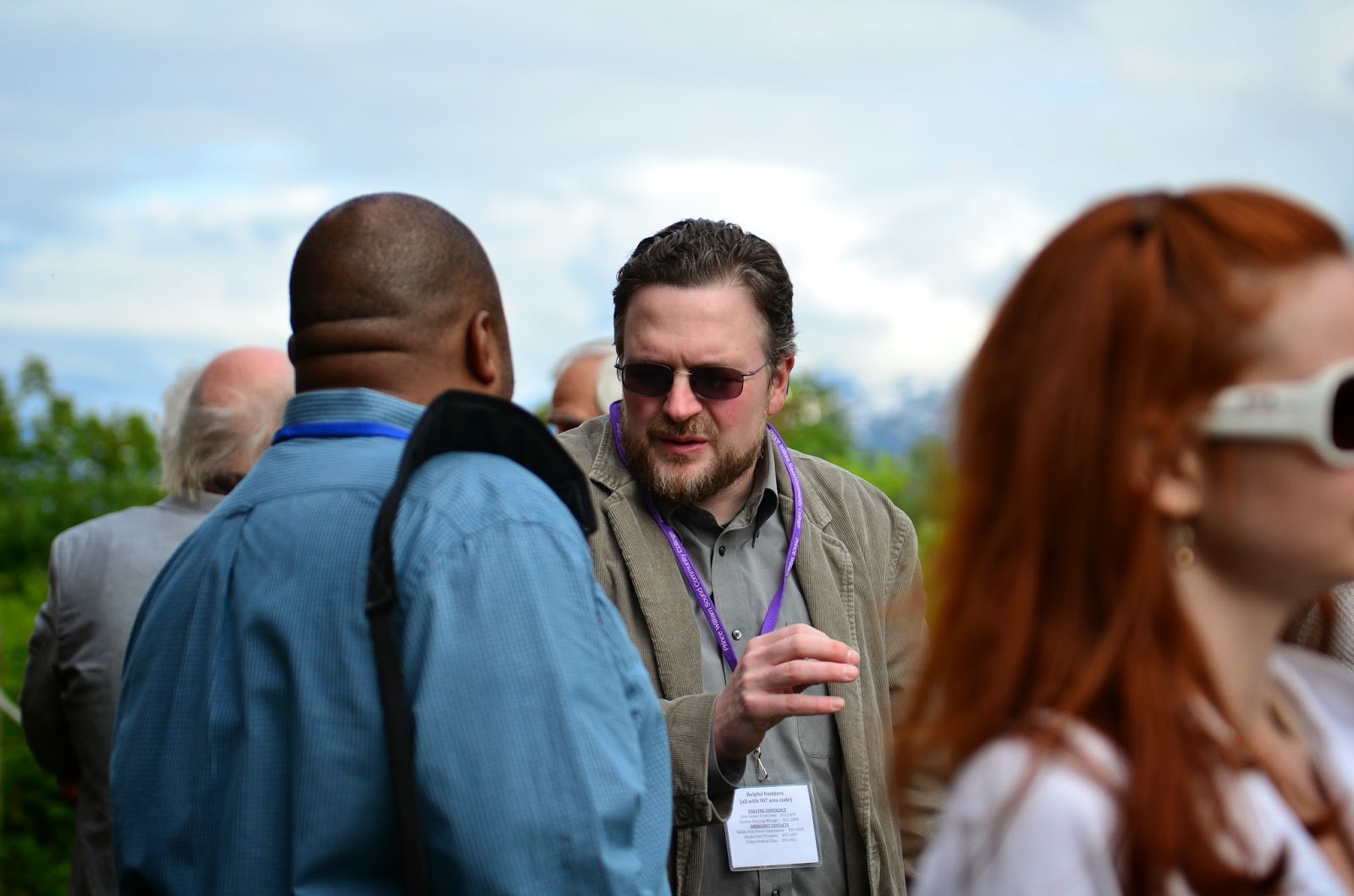 A typical conference day consisted of play labs from 10 a.m. to 6 p.m. Play labs are the meat of the conference. At the play lab, your work is read by actors, then critiqued by a set of panelists, and then the audience. The panelists are featured artists, working theater professionals, who take time from their brilliantly successful careers to fly to the remote outpost of Valdez to help new talent.

(At first I was mystified, why would these good New Yorkers and Los Angeles types come here? Within a few days, their smiles made it clear. They were having the time of their lives. Sometimes, I think we life-long Alaskans forget how amazing it is up here.)

As the critiques are provided, the playwright nods vigorously, keeps his or her mouth shut, and accepts the comments — good and not so good — with grace; at least that’s the theory. Moore advised playwrights to take notes on everything, smile and understand only about 20 percent of what you hear will be useful to your play; but it’s an invaluable 20 percent.

In the evening, conference attendees were treated to a fully produced play. Evening plays were either works from the featured artists or from plays read the year before. Uniformly impressive, these performances were a highlight.

Following the evening performance was the Fringe Festival at the Fat Mermaid — organized by Juneau’s Bostin Christopher and Chugiak’s Janna Shaw. Here, you might find yourself with a rock on your nose reciting lines in your most stentorian voice. Here, ribald and invigorating short plays were performed. Here, the newbies and old hands mingled, laughed, and hugged in a haze of lunatic creativity.

Some people moved to yet more venues. Most of us went to sleep.

This was a typical day for me. For some there were also writing sessions, 10-minute play slams, monologue and singing workshops. I completely missed the monologue workshop. Both as actor and writer, that would have been fun. Taught by Frank Collison and Laura Gardner, successful working actors in California, the workshop is yet another opportunity for writers to get their work staged and for actors to practice. On the conference’s last day, all the monologues, singing and 10-minute plays were performed. This was a treat. By then, we were all too wasted to sit through any more play labs.

Act V – The Kindness of Strangers

The play that got me to Valdez is called “The Kindness of Strangers.” Two families, the Strangers and the Joneses get together over soup for a family party. The Joneses are impossibly perfect; difficult to keep up with. The Strangers are kind. The Joneses brag of their accomplishments and when a crack in their façade appears, hilarity ensues. At least that is what supposed to happen.

My play was read early in the week. I directed one rehearsal the day before. True to my organizational skills, character names were transposed on the script, there were not enough stands, and I stunk from flop sweat. The actors were polite and understanding, particularly since this was my first play and first conference. One actor even found my play “interesting!”

Wait a minute, isn’t “interesting” the word used to describe a potentially disastrous blind date to a friend?

At the hour of my actual reading, I was terrified. I paced off a week’s worth of calories. My brain sparked like a smashed transformer. I had just met my lead panelist John DiFusco. DiFusco is a Vietnam veteran who wrote a famous and successful play about his experience called “Tracers”

The man’s background got me to thinking — which is a terrible thing.

How would a man who’s dodged bullets take my 12-minute fluffy attempt at humor. I envisioned disaster. I envisioned this wizened veteran, still quite imposing, slamming the play down in disgust, maybe ripping it in half as he ripped my effort as a total waste of his time. “I SERVED, dammit! I can’t comment on this s&^t!”

In reality, of course, DiFusco was gracious and kind. He complimented my farce. I paid attention, and as the week progressed I came to appreciate DiFusco’s feedback to playwrights; how his feedback focused on a play’s feel rather than technical prowess. As for “Strangers,” the audience laughed when they were supposed to. What more could you want? If there was any commonality to the comments it was that viewers wanted more. (Better, I suppose, than wanting less). As my new friend Jacqueline put it, “they wanted more soup in the soup.”

The first couple of days were rough. I’m new to this crowd. Basically, I smiled my way through a pervading sense of doom. I considered dropping the charade of playwright and fleeing back to Juneau. And I was nervous not just for my play’s performance, but for all the other playwrights as well. Empathy’s a b*tch. I was a wreck.

So, I have confidence issues. One conference-goer suggested I work to develop more…

“Confidence!” I said, “Ingratiating humility is totally my shtick!” It’s part of my overall effort in Life to keep everyone’s expectations low. That way, mere competence is amazing.

Folks don’t always appreciate ingratiating humility. It’s annoying. So I vowed to be more confident when and if there’s a next time. I mean, “when there’s a next time.” In fact, next time, I will describe myself in the program as “outrageously talented” and that my performances and plays are “must-see events.”

Almost all the conference attendees I met were wonderful. That helped. I made fast friends with a number of terribly talented people: 20-year-olds, 80-year-olds, New Yorkers, Texans, locals and more. There was Catherine with an ear for café chats, Antoinette the master of Southern gothic, and Jean the matriarch of Anchorage theater.

On the strength of my new friends’ encouragement, the Last Frontier Theater Conference became a place to gain confidence, a place to try new things, a place to challenge the boundaries of your comfort zone, a place to sing karaoke.

Hanging in the Boardroom after the Fringe, a group of talented conference participants sang pop and jazz. As I loosened up under the influence of a couple of IPAs I decided I could sing too. And not only could I sing, I could sing Elvis. So I sang “Only Fools Rush In,” and wouldn’t you know it? The crowd actually clapped; legitimately clapped. Granted, the crowd was only four people … and they were new friends … and drunk, but still. So, emboldened by the praise and one more beer I went for Otis Redding’s “Dock of the Bay” – perhaps the world’s most perfect song. The crowd was more subdued on that one. Figuring they hadn’t heard me well enough, I tried for Jimmy Dean’s “Big John,” a country proto-rap recounting the tale of a doomed miner. There was silence; silence.

Lesson: Yes, have confidence, but know your limitations.

I’m still not sure if I’ll ever be one of “those people.” I can say that after Valdez, I wouldn’t mind. I am much more confident in stagecraft as a storytelling outlet for me. Theater is an inherent part of living. We’ve been telling tales since the Stone Age. Our stories teach us about kindness, sex, greed, survival and family — how to be fully human. The conference allowed full immersion in theater and creativity. It unleashed a motivation. I will try this again. Try writing a play. See if it gets in. See if the next time is as amazing as this time…

Lights fade to dark as the writer makes soup at his computer.

In the darkness, the sounds of typing.

49 Writers member Clint Jefferson Farr is a father and husband. He loves his family, friends, dog, and Juneau. Clint has written about film and television for the Juneau Empire since October of 2011. He dreams of writing and hosting an Alaska tourism show. Clint can be reached at cjfarr (at) hotmail.com.