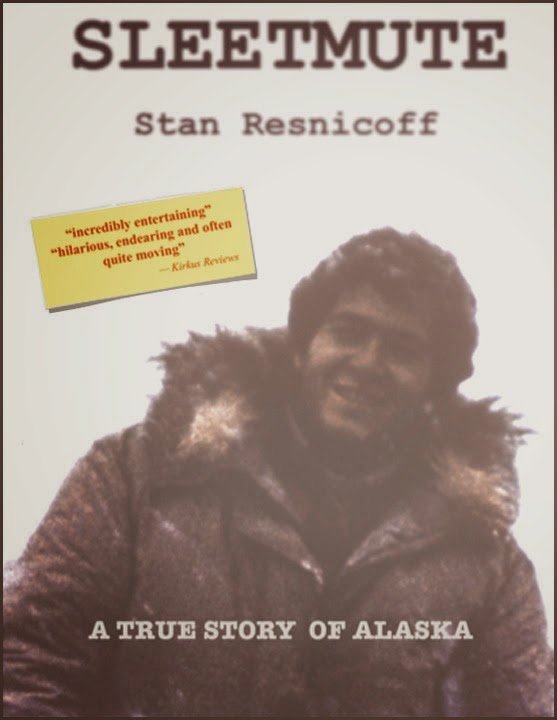 It was probably January when I decided to move a short
distance into an abandoned log cabin right on the riverbank. Now there were two
things I didn’t know.  First, it was
abandoned because it’s too cold right on the river, and if that wasn’t enough,
this cabin had been lifted up in a flood and rotated so now its front door
faced north. Right into the wind. I didn’t know. I thought it looked good. It
was impossible to heat.
That night, with no warning, I got sick. Really sick. I
became very weak. I had a fever and I was burning up. I felt terrible and to
top it off I had to take a wicked shit.
I can’t claim to have been thinking clearly but the only
thing on my mind was to make it to the little outhouse near my previous cabin.
It wasn’t far. Maybe 2 football fields away. I already had on two pairs of
thermal woven cotton long-johns. I put on sweaters. I got on my parka. I opened
the door.
It was brutal. Maybe 40 below. It was 4 am.  (from Sleetmute: A True Story of Alaska, by
Stan Resnicoff)
New York City. 1968. I was 24. I had
just graduated from college. I applied to VISTA (Volunteers in Service to
America) as a possible deferment from the Army and Vietnam. I was young and I
thought I knew everything. I figured if they had VISTA in any state they had to
have VISTA in every state. I requested an assignment in Hawaii.
So naturally, six months later I’m in
the very remote, tiny Eskimo village of Sleetmute, Alaska. No streets, no
electricity, no phones, no television, no signs, no law. I’m wearing everything
I own. I’m hunting for my food. It’s fifty degrees below zero and it’s getting
colder……..
Kirkus Reviews said Sleetmute is “incredibly
entertaining” and also “Resnicoff’s encounters fascinate not only because they
introduce readers to a world few have ever seen, but also because he’s a gifted
storyteller. He channels his 24-year-old self’s confusion and naïveté in a way
that is by turns hilarious, endearing and often quite moving.”
After Sleetmute, Stan spent three warmer years in Honolulu
designing creative educational materials for the children of Hawaii. He then
accepted a fellowship at the Center for Advanced Visual Studies at M.I.T for
work that he was doing on natural sensory playgrounds called ‘Playcanos’. While
in Boston he was also the exhibits designer for the Boston Children’s Museum,
and later he designed creative learning games and experiences for the American
Museum of Natural History (NY), the Bronx Zoo and the Smithsonian Institution.
In 1982 he joined Mattel Toys as an educational software
designer eventually becoming the Director of their ‘blue-sky’ toy research
group. He designed the award winning GeoSafari CD-ROM series. More recently,
his first children’s book, ‘Stanley, the Seal of Approval’ was published by
Random House and it, as well as several other of his children’s books and
movies are now available online. He lives in Redondo Beach, California.
AUTHORS SITE:
http://www.stanresnicoff.com/Stan_Resnicoff/Sleetmute.html
AMAZON (paperback and kindle):
http://www.amazon.com/Sleetmute-Story-Alaska-Stan-Resnicoff-ebook/dp/B00BQJZP2C/ref=sr_1_1?ie=UTF8&qid=1407971835&sr=8-1&keywords=sleetmute
APPLE iBOOK
https://itunes.apple.com/us/book/sleetmute/id562978847?mt=11&ign-mpt=uo%3D4
Would you like to see your book featured here? Check out our Spotlight on Alaska Books guidelines and submit today!
Views: 37

2 thoughts on “Spotlight on Alaska Books: Sleetmute: A True Story of Alaska, by Stan Resnicoff”