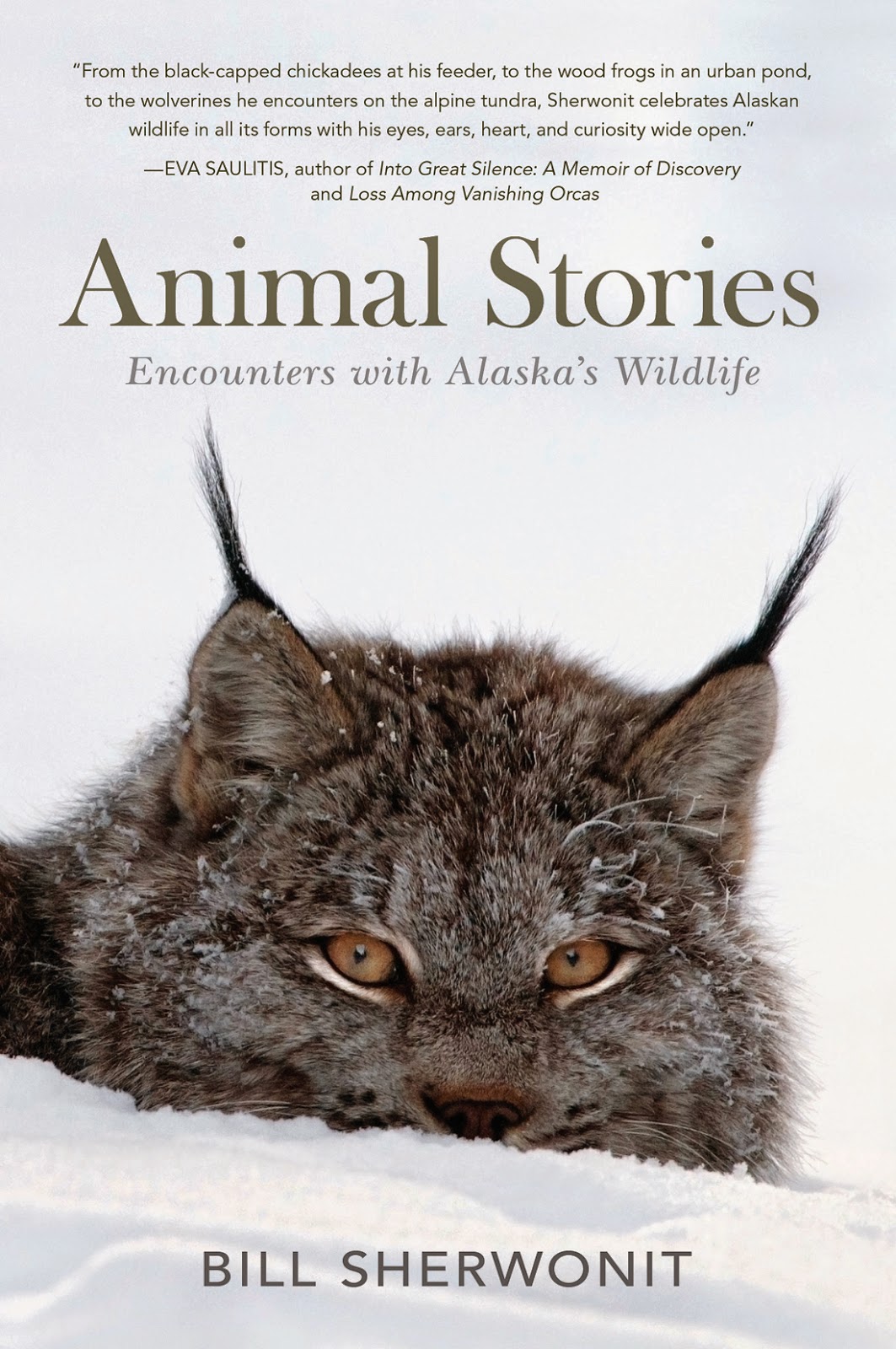 The early stages of turning my “Animal Stories” idea into a book
went remarkably smoothly. Two decades of writing wildlife essays had given me
plenty of material to choose from. Though there are some iconic Alaskan animals
I haven’t yet encountered and/or examined in story, I had more than enough
diversity in the species, locales, and nature of my encounters to fill a book
(and then some). There were certainly issues to address, for instance repetition
of content in certain stories and the need to provide additional context and/or
update information in some pieces. But overall, the essays seemed to work well
when woven into a larger work.

From everything I could tell, the staff at Graphic Arts Books/Alaska
Northwest Books approved my choice of essays, my organization of them into four
sections (eventually to become Meeting the Neighbors, Along City and Highway
Fringes, Backcountry Encounters, and a sort of grab-bag section titled
Oddities, Surprises, and Dilemmas), and my inclusion of an author’s note to
introduce the stories. In short, the editorial staff seemed to trust my
instincts, choices, approach, and story-telling style and ability. There was
minimal disagreement or even discussion of how the manuscript was evolving.

Upon reaching the copy-editing phase, I expected this also to go
smoothly. I knew there would be questions and suggestions to address, but the
content and organization seemed pretty well set by this point; the manuscript
seemed to be in good shape.

Michelle, my copy editor, began her notes to me in the same way
I’d critique an essay in one of my nature writing classes: she told me what
worked well for her, what she admired about the collection, what she considered
its strengths. Then, in her fourth paragraph, she added, “My primary concerns
are related to tense and time . . .”

I have always loved using present tense when writing essays.
Certainly there have been exceptions, but nearly all my essays—especially those
I’ve written about wildlife—are composed in present tense, which I believe
gives them more immediacy: the reader is present with me as I’m having an
experience and reflecting upon it. I also think that writing the main narrative
line in present tense makes it easier to move (or jump) around between earlier,
past experiences. Bottom line: present tense works for me as essayist; rightly
or wrongly, I believe I’m more effective using it.

While writing in the present tense can be effective for a single
essay, Michelle pointed out that it becomes more challenging in a book-length
narrative—or a book-length collection of essays that were written across two
decades, with changing personal circumstances (including the places I’ve lived
while residing here in Anchorage and the people with whom I’ve had primary
relationships) and perspectives, understandings.

Michelle explained, “Because of your unique position and ability
to tell stories of human interaction with our natural world, some of the
lessons that readers learn from you are in the ‘looking back’ on your
experiences.

“I believe readers will appreciate this book as a memoir. We know
these things aren’t happening now, but rather that you are recalling memories.
Your perspective on these memories adds depth to the theme of the book. You
couldn’t always know, in the moment, the significance that a particular event
would later take in your life.

“Writing in the present tense is tricky. The reason to do it is to
bring readers right into the action—they are actively participating as the
scene unfolds. Not many authors use this technique because it is difficult to
sustain in a logical way through the length of a book manuscript. Sections in
present tense can feel jarring and shifts from past to present and back to past
within the story itself can become a distraction.

“There is a notion of historical
present which can be employed to give a sense of immediacy to a passage
that actually took place in the past. Again this can be tricky and needs to be
used carefully and intentionally. . . .

“That being said, I would suggest your memories of your encounters
with nature be written in past tense throughout the manuscript.

“I’m not suggesting that the whole book be written exclusively in
past tense. There are places where you ruminate on the future (e.g. whether you
will return to a certain location) and that works fine. Or places where you’re
talking about the kind of city Anchorage is today and so present tense makes
sense. Or places where you are making a current observation about a past event,
expressing what you’ve learned from it . . . It’s really in the memories where
we know the action is not occurring now,
that past tense should be used.”

To her credit, Michelle then gave some detailed examples to back
up her points and suggestions.

Still, my initial reaction was to oppose her well-laid-out
argument and advice. Present tense had always worked for me and I believed it
worked for me here, too. Besides that, I realized that changing all my essays
from present to past tense would be an enormous amount of work. It’s not as
simple as merely changing verb tenses. Of course Michelle knew that. She
empathized with my dilemma and reminded me that the final decision was mine.

At my request we talked. Though I said I needed to think about it
some more, by the end of our conversation I knew I’d make the change. Her
arguments—and especially some of the examples she’d given me—made sense. Given
the substantial time frame that I covered, my own changing circumstances, and
other changes that have occurred since I first wrote several of the essays, the
use of present tense would likely create unnecessary confusion for the reader
and perhaps some misinterpretations.

Reluctantly at first, but with increased determination—and, dare I
say it, enthusiasm—I made the changes. After all, I wanted this to be the best
book it could be. And as a whole, I could see the collection of essays becoming
clearer and stronger, more cohesive and coherent, when written in the past
tense (with sections in present tense where appropriate, as Michelle had
commented in her note).

As I’d guessed, it wasn’t an easy change to make. Some of the
essays required considerable revision and reframing. But in the end, I liked
what I read. Animal Stories is a
better book because of it.

A transplanted New
Englander, nature writer Bill Sherwonit has made Anchorage his home since 1982.
He’s contributed essays, articles, and commentaries to a wide variety of publications
and is the author of more than a dozen books. His newest, Animal Stories:
Encounters with Alaska’s Wildlife, will
be published this fall by Alaska Northwest Books. His website is
www.billsherwonit.alaskawriters.com.

3 thoughts on “Bill Sherwonit: Getting Tense While Moving from the Present to the Past”