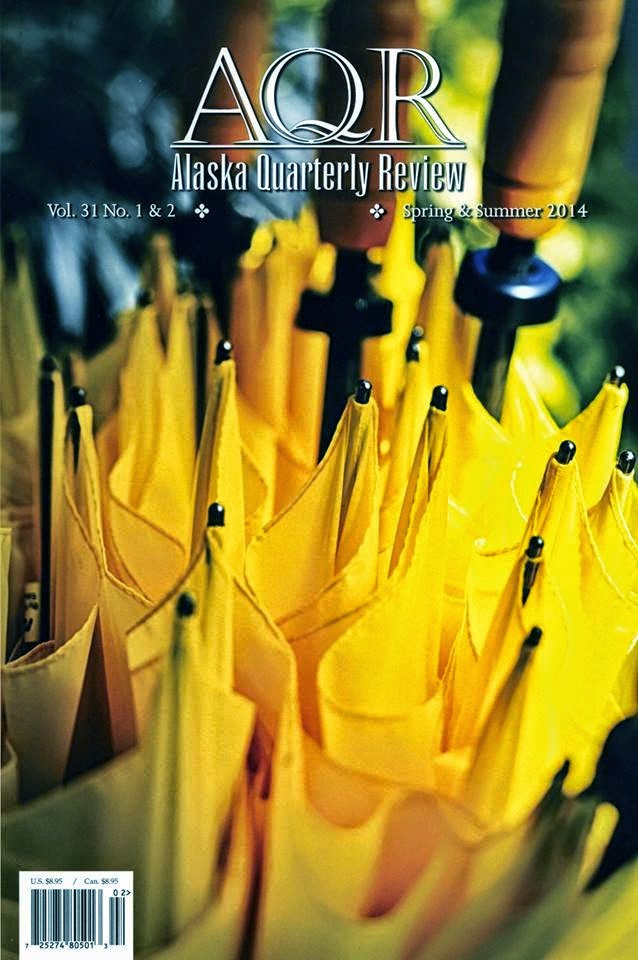 I
started reading Alaska Quarterly Review
as an undergraduate creative writing student at University of Central Florida. Yes,
Central Florida. I’m not sure whether I found the journal or the journal found
me. My childhood was filled with dreams of mountains, despite being raised in a
state so flat the majority of it sat below sea-level. I could never explain
from where my yearning came. Anything titled Alaska would have attracted me. My
connection with the state is on a different plane of understanding, one not
bound by the limits of my reason. In that sense, I (subconsciously) found AQR.

On
the other hand, my quest as an undergraduate was to master the craft of
writing. I read everything that promised it could teach me something about this
art. At the time, I was a clumsy stylist and wandering storyteller. I am
probably still both of those things, but back then I was filled with optimism.
I read everything with an insatiable hunger, wanting to absorb every poetic
metaphor, every well-developed character, every surprising plot turn.

Jeanne
Leiby was my first mentor. She served as Editor-in-Chief at The Florida Review and taught the first
two Fiction Workshops I had ever taken. She taught me how to write sentences so
that they snap, how to drive stories instead of describing routines. She always
had some recently published work available to exemplify the element of craft I
was learning. She was always timely.

She
came into class one day thrilled about a story she had had accepted in the 2003
(vol. 20) edition of AQR. The story was called “Family Meeting.” I read and
reread and reread her story, looking for the secret that made her sentences
sing. Then I read other stories in the same edition. I remember how my
imagination ran wild thinking about the diverse talent appearing in a journal
published out of Alaska. Every few months, The
Florida Review office would receive another edition of AQR. With their
glossy covers of craggy spires and mystic meadows, their pages of riveting
fiction, AQR captured my spirit and intellect. In that sense, AQR found me.

Not
only did I want my own story in those pages one day, I wanted my body, mind,
and soul to be in Alaska. My irrational childhood desires seemed somewhat
attainable. I modeled my neophyte writing on the work I found in AQR; and while
I wasn’t publishing my own stories, I learned how to analyze other stories well
enough for Jeanne Leiby to invite me to serve on the editorial staff for The Florida Review.

Even
with access to several national literary journals in Florida Review’s library, something kept drawing me back to that
opalescent cover of rain-clouds crowning a mystical mountain’s peak. Maybe it
was the promise of unthinkable possibility. After all, Jeanne Leiby was a
Florida author, whose story was featured in this far away land’s journal. I
kept writing. I kept imagining impossible thoughts.

The
first story I ever sent out to journals was sent only to AQR. Of course, it was
rejected. But the letter itself, a standard-issued response, seemed to provide
some vindication for my efforts. The editors had, at the very least, written me
back. Which meant they read my story! I was close enough to feel the cold blue
of tundra frost. I remembered something Jeanne always said: “Writers write
because they want to be read. Otherwise, why write at all?” She said this while
discussing the importance of considering audience even when writing fiction,
especially when writing fiction. I realized it then, when a standard-issued
response that all submitters receive appeared to me as words of encouragement
written only for me.

I
continued to grow and learn because of my desire to be included in AQR.

Later,
in 2011, while I was completing my MFA thesis, I learned that Jeanne Leiby
passed away in a tragic car accident. Immediately after a former professor
broke the news, I reread “Family Meeting,” feeling inspired by her all over
again, listening to the snap of her sentences and the hum of her story’s
engine.

There
are recent talks of dismantling Alaska
Quarterly Review. I would have never believed that a journal as prestigious
as AQR, which can reach from one distant coast on this continent to the
diametrical opposite, would not be valued at its own home. There isn’t much I
can offer as a means to save the journal. I myself have, to this point, failed
to gain inclusion in its pages, even though I did realize that irrational
fantasy of living in Alaska. What I hope, then, is that more writers and
readers alike pick up an edition of AQR before it’s too late. Feel inspired by
some of the nation’s most elegant writers. Even if you’re not looking, let AQR
find you.

JT Torres was born in Miami, Fla., where only legend told of
winter. He imagined snow and mountains, the cloud-covered ground and steep blue
peaks. He earned his MFA from Georgia College & State University. Four
hundred miles north introduced him to flurries, which were colder than
imagined–not the warm downy fluff that fell in his dreams. He bought his first
coat. For a year, he lived in Colorado, where he taught composition at Front
Range Community College. During that year, he had stories or essays published
in The Rambler, Fiction Writer’s Review, Limestone, Brokenplate,
Alimentum, Florida Review, Greensilk Journal, and A Capella Zoo.
Winter had a positive effect, it seemed. But it wasn’t “winter” enough. (Did
you know Boulder, CO averages 300 days of sunshine a year?) JT finally lived in
Alaska, teaching composition at University of Alaska-Anchorage. The cold and
dark became home. Currently, he is pursuing a PhD at Washington State
University. His novella, “Nana’s Guide to Illusion,” will be included
in VP&D House’s Weathered Edge II.
Views: 7