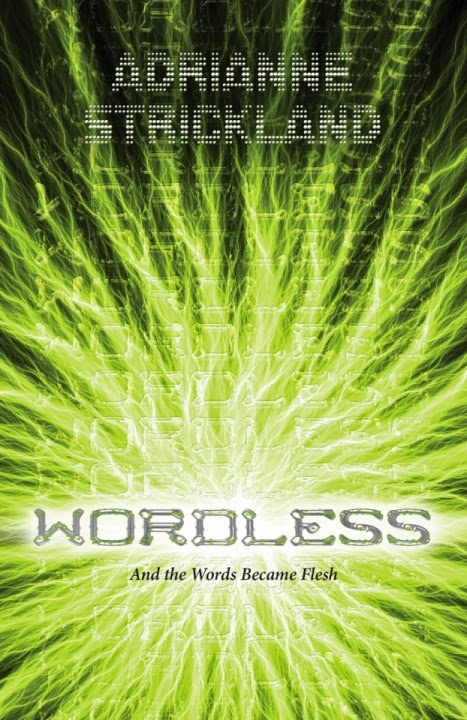 I didn’t let myself think about who I
was trying to help as I stopped underneath the darkened balcony. She was just a
girl. Just your average all-powerful, insanely beautiful girl.
My thoughts weren’t calming. My heart
was thumping as loud as a jackhammer at the crack of dawn—which was about what
time it was, sunlight trickling down from the peak of the pyramid, turning the
world to gold.
Would she even be awake? In my eagerness
to help her, I hadn’t really considered the possibility that she wouldn’t be. I
almost wanted to laugh.
Then, out of nowhere, something hit me
like a pile of bricks, so heavy it flattened me on the wet grass.
Not a something—someone. A person, sprawled on top of me. A girl
covered in blood. (WORDLESS, AdriAnne Strickland)
In
Eden City, a member of the illiterate wordless class would never dream of
meeting the all-powerful Words . . . much less of running away with one. So
when a gorgeous girl literally falls into his lap during a routine trash run,
seventeen-year-old Tavin Barnes isn’t sure if it’s the luckiest or worst day of
his life. That girl is Khaya, the Word of Life, who can heal a wound or command
an ivy bush to devour a city block with ease. And yet she needs Tavin’s help.
By
aiding Khaya’s escape from the seemingly idyllic confines of Eden City, Tavin
unwittingly throws himself into the heart of a conflict that is threatening to
tear the world apart. Eden City’s elite will stop at nothing to protect the
shocking secret Khaya hides, and they enlist the other Words, each with their
own frightening powers, to bring her back.
“Impressive
mythology and fast-paced adventure.” – Booklist
“The
right amount of pizzazz in the form of cinematic action and naked, sexy fun….
[An] intriguing, original science-fantasy setting sure to attract fans.” – Kirkus
Reviews
“Strickland’s
fast-paced debut… raises questions of identity and belonging… Even the least
ethical characters prove emotionally vulnerable.” – Publishers Weekly
“A
fast-paced blend of sci-fi and fantasy with scary real-world implications,
Wordless grabbed hold of me from the start and wouldn’t let me go. Brilliant.”
– Chelsea Pitcher, author of The S-Word and The Last
Changeling
AdriAnne Strickland was a bibliophile
who wanted to be an author before she knew what either of those words meant.
She shares a home base in Alaska with her husband, but has spent two cumulative
years living abroad in Africa, Asia, and Europe. While writing occupies most of
her time, she commercial fishes every summer in Bristol Bay, because she can’t
seem to stop. Her debut YA sci-fi/fantasy, WORDLESS, came out with Flux Books
in 2014, and is available in paperback and e-book formats wherever books are
sold.
http://www.adriannestrickland.com/
http://www.goodbooksbadcoffee.com/book/9780738739663
http://www.amazon.com/Wordless-AdriAnne-Strickland-ebook/dp/B00LXD0KDK/ref=la_B00JHR0XEU_1_1?s=books&ie=UTF8&qid=1407873956&sr=1-1
Would you like to see your book featured here? Check out our Spotlight on Alaska Books guidelines and submit today!
Views: 12