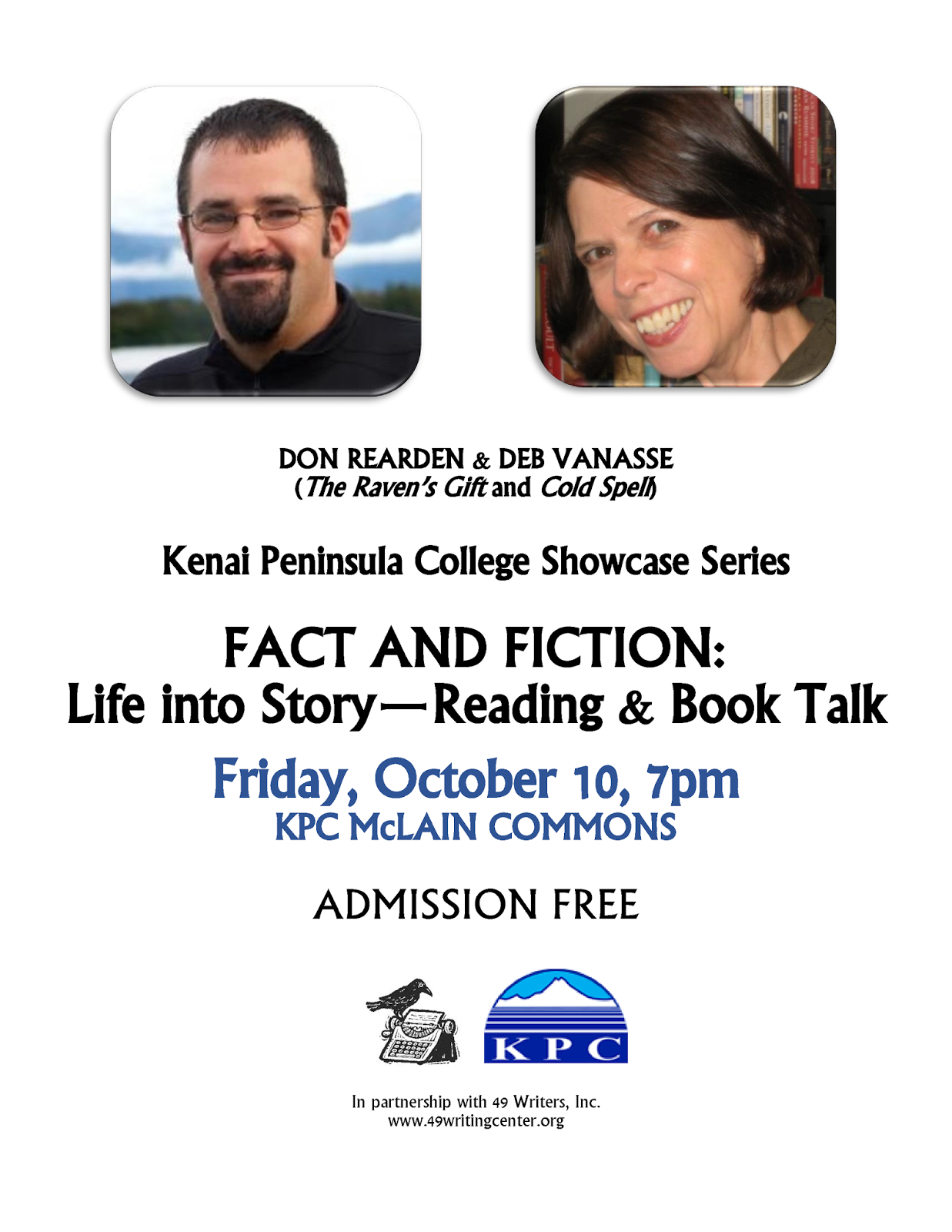 Whenever I hear the latest update on the ebola outbreak, I think of Don Rearden. I can’t
help it. In his novel The Raven’s Gift,
he wrote about the devastation brought on by a deadly disease that spins out of
control. Sure, his book is fiction, and at that time he wrote it, he was
thinking bird flu, but the parallels between fact and fiction are a little
uncanny.
On a less dramatic scale, I’ve seen a similar tension between
fact and fiction play out involving a plot point in my first novel A Distant Enemy. Nearly two decades ago,
I wrote a set-up that involved intentional fishing during an emergency closure in
Southwest Alaska. In the last few years, a similar scenario had played out in a
very real conflict over changes in salmon harvest more drastic than any I’d
dared to imagine. Arrests and court battles followed. Decisions were reached,
but the battle is far from over.
It would be nice to think that when it comes to such things,
we authors are smart and savvy and maybe even a little prophetic (oh lottery
numbers, please make yourselves known!). But really, the whole thing boils down
to this: in fiction, our material is life as it’s lived and known and hidden
and dreamed.
Not that our task is easy. Our own lives infuse our work
with power even as “real life” gets in the way. We face hard choices about what
constitutes truth. And sometimes what we think we know is only a smattering of
what’s required of us to get it right on the page, which means research—lots of
it, even for stories.

As author Peggy Shumaker so aptly puts it, “the whole truth is never available to us.” And yet somehow in our work, we wrestle with the facts of who we are – the things we can face and the truths we aren’t ready for yet. The unknown always feels bigger than the known.

Then there are the practical matters of whose stories we tell and what right we have to give voice to anyone, along with the fine points of perspective and the tension between getting the facts right (whatever form “right” may take) and staying true to the narrative as well as the extent to which we live the facts of our work as opposed to drawing on the experiences of others.

The intersection of fact and fiction makes for great conversation
among writers. Tomorrow we’re headed to Soldotna to share that discussion with
local readers, writers, and seekers, along with the just plain curious. One and
all, you’re invited to “Fact and Fiction: Life into Story,” a reading and book
talk hosted by the Kenai Peninsula College Showcase Series in conjunction with 49
Writers.
And wait, there’s more: Don and I couldn’t be happier to
announce that Seth Kantner (Ordinary
Wolves, Pup and Pokey, Shopping for Porcupine) will be joining us for this
lively discussion. We hope you’ll be there too: 7 pm, at KPC’s McLain Commons.
Admission is free, with book sales and signing to follow. The next day, Don and
I will be teaching workshops on character and point of view. For the workshops,
preregistration is required; head on over to the 49 Writers website to get all
the scoop.
Co-founder of 49
Writers and founder of the independent authors cooperative Running Fox
Books, Deb Vanasse has authored more than a dozen books.
Her most recent is Cold
Spell, a novel that “captures the harsh beauty of the terrain as well as
the strain of self-doubt and complicated family bonds,” according to Booklist. Deb lives and
works on Hiland Mountain outside of Anchorage, Alaska, and at a cabin near the
Matanuska Glacier. Portions of this post have been published previously.
Would you like to write a guest
post relevant to Alaska’s literary community? Email 49writers (at) gmail.com or
debvanasse (at) gmail.com.
Views: 6