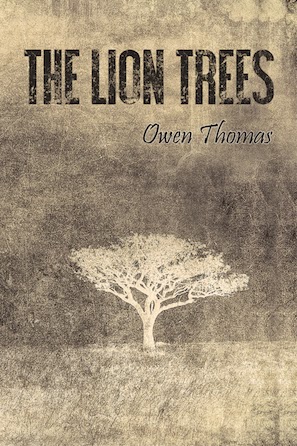 It is the nature of a body to succumb to gravity. And so
it was with me and my directors. It was a light that they shed, or a vibration
that they hummed in their bones without even knowing.
Like so many directors, Blair had a singularity of
presence that gleamed and flickered in the dark like a beacon to lost and
desperate sailors. Strange that it is the lost and desperate who are most
likely to mistake warning for invitation. It is an irony so sick as to make one
believe in a psychopathic God. But then, the notion that God has issues in
abusing our trust has always been one close to my heart. In the words of Angus
Mann, “Trust breeds its own betrayal, even in the heart of God.” (THE LION TREES,
Owen Thomas)
What happens when you get the life you aim for and it
hurts like hell? The Johns family is unraveling. Hollis, a retired Ohio
banker, isolates himself in esoteric hobbies and a dangerous flirtation with a
colleague’s daughter. Susan, his wife of forty years, risks everything for a
second chance at who she might have become. David, their eldest, thrashes to
stay afloat as his teaching career capsizes in a storm of accusations involving
a missing student and the legacy of Christopher Columbus. And young Tilly, the
black sheep, having traded literary promise for an improbable career as a
Hollywood starlet, struggles to define herself amid salacious scandal, the
demands of a powerful director, and the judgments of an uncompromising writer.
By turns comical and poignant, the Johns family is
tumbling toward the discovery that sometimes you have to let go of your
identity to find out who you are.
“[A] cerebral page turner…a powerful and promising
debut.” – Kirkus Reviews
“[FOUR STARS] In its structure and nature, [The Lion
Trees] reminds me above all of John Updike’s wonderful Harry Rabbit novels and
their ability to summarize the essence of change in American society across a
decade at a time.” – BookIdeas.com
“[FIVE STARS] This is a powerful, gripping and realistic
story. … The Lion Trees does what so very few great novels can: it will take a
lot out of you, but leave you with much more than you had when you began.” – Pacific Book Reviews
Owen Thomas, a member of 49 Writers, lives and writes in
Anchorage, Alaska. His new novel “The Lion Trees” chronicles the increasingly
fractured and chaotic existence of the Johns family, each of its members
struggling with fundamental questions of identity. Owen is also the author of a
collection of short stories and novellas entitled “Signs of Passing: Letters
from Winchester County” winner of the 2014 Pacific Book Awards for short
fiction. His story “Everything Stops” is being published in September 2014 by
Fiction Attic Press as part of an anthology of short fiction called “Modern
Shorts” and is available on Amazon. Owen has come to understand that there is a
strange disquiet in referring to oneself in the third person. He is seriously
afraid he will not be able to stop. “The Lion Trees,” published by OTF
Literary, is available in paper and electrons at Amazon and Barnes & Noble.
Views: 11

1 thought on “Spotlight on Alaska Books: The Lion Trees, by Owen Thomas”