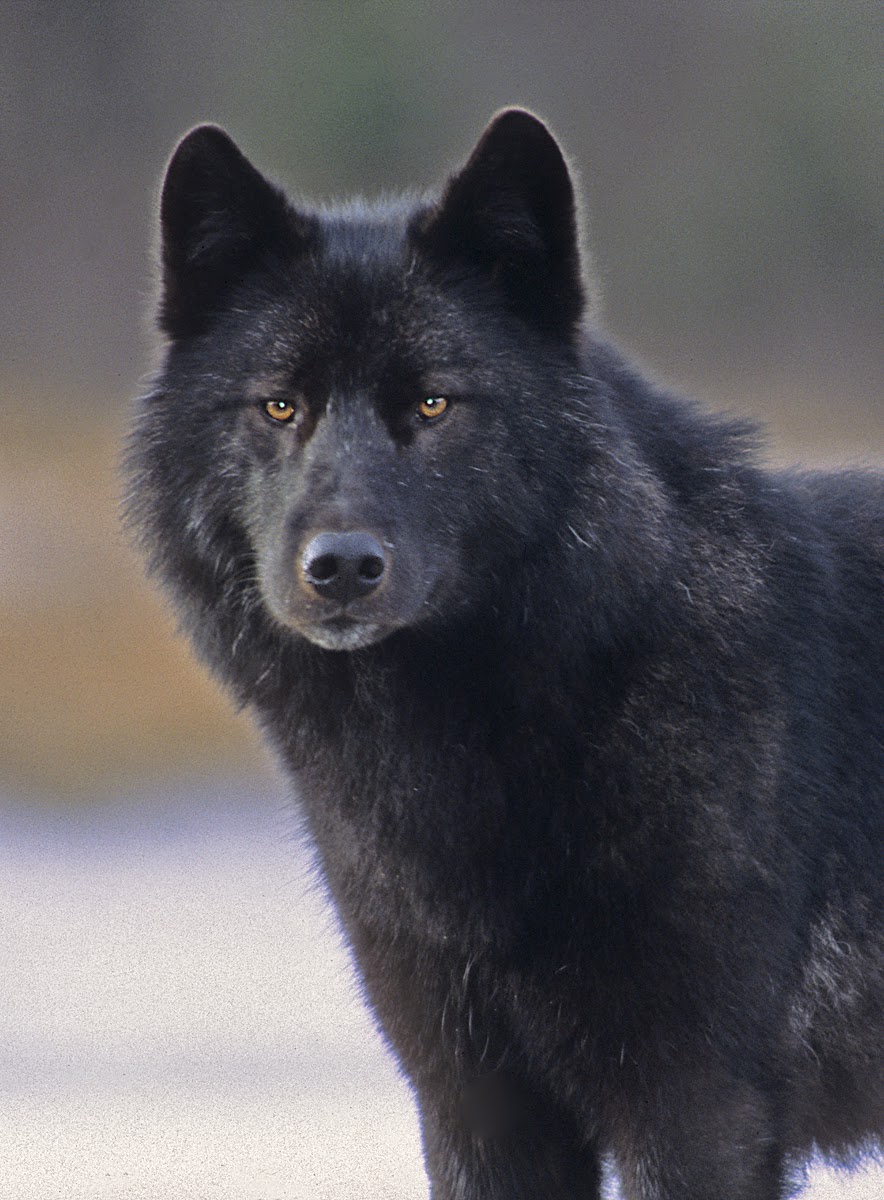 “Are you sure about this?” my wife, Sherrie, breathed.
She glanced over her shoulder toward the comforting glow of our house on the
lake shore, then gazed ahead, where a black wolf stood on the ice in the
gathering twilight. Bundled against the Southeast Alaska cold, we’d taken along
just one of our three dogs—our female yellow Lab, Dakotah, who’d always been
perfectly mannered and under voice control around wildlife, from bears to
porcupines.

Despite some understandable jitters, Sherrie was so
thrilled she was about to jump out of her skin. After all these years of trying
and not seeing, there it was: her first wolf. Perfect, I thought, and easier
than it ever should be. But as we walked farther out on the ice, things
changed. The wolf, instead of watching from the tree line as he had several
times with me, angled toward us at a trot. Then he broke into a bounding lope,
snow flying beneath his paws, jaws agape. I drew Sherrie toward me, and reached
for Dakotah’s collar. My vision sharpened, and synapses crackled. I’d seen my
share of wolves over the years, some point-blank close, and hadn’t quite
shifted into panic mode. But anyone who claims he wouldn’t get an adrenaline
jolt from a running wolf coming straight in, with no weapon and no place to
run, and loved ones to defend, is either brain-dead or lying.

In a few heartbeats, the wolf had closed the distance
to 40 yards. He stood stiff-legged, tail raised above his back, his unblinking
stare fixed on us—a dominant posture, less than reassuring. Then, with a
moaning whimper, Dakotah suddenly wrenched free of the two fingers I’d hooked
through her collar and bounded straight at the wolf. A tone of desperation
sharpening her voice, Sherrie called again and again, but there was no stopping
that dog. The Lab skidded to a stop several body lengths short of contact and
stood tall, her own tail straight out, and as we watched, mouths open, the wolf
lowered his to match. With the two so close, I had my first clear idea of just
how large the wolf  really was. Dakotah,
a stocky traditional-style female Lab, weighed in at a muscular 56 pounds. The
black wolf towered over her, more than double her weight. Just his head and
neck matched the size of her torso. A hundred twenty pounds, I figured. Maybe  more.

The wolf stepped stiff-legged toward Dakotah, and she
answered. If she heard our calls, she gave no sign. She was locked on and
intent, but utterly silent—not at all her normal happy-Lab self. She seemed
half-hypnotized. She and the wolf regarded each other, as if each were
glimpsing an almost-forgotten face, and trying to remember. This was one of
those moments when time seems to hold its breath. I lifted my camera and
snapped off a single frame.

As if that tiny click had been a finger snap, the
world began to move again. The wolf’s stance altered. Ears perked high and held
narrow, he bounced forward a body length, bowed on his forelegs, then leaned
back and lifted a paw.  Dakotah sidled
closer and circled, her tail still straight out. The eyes of each were locked
on the other. With their noses a foot apart, I pressed the shutter once more.
Again, the sound seemed to break a spell. Dakotah heard Sherrie’s voice at
last, and bounded back toward us, turning her back, at least for now, on
whatever call of the wild she’d just heard. We watched for long minutes with
Dakotah softly whining at our sides, staring toward the dark, handsome stranger
who stood, staring our way and whining back, a high-pitched keening that filled
the silence. Half-stunned, Sherrie and I murmured back and forth, wondering at
what we’d seen, and what it meant.
But it was getting dark—time to go. The wolf stood
watching our retreat, his tail flagging, then raised his muzzle to the sky in a
drawn-out howl, as if crushed. At last he trotted west and faded into the
trees. As we walked toward home in the deepening winter evening, the first
stars flickered against the curve of space. Behind us, the wolf’s deep cries
echoed off the glacier.
Views: 96