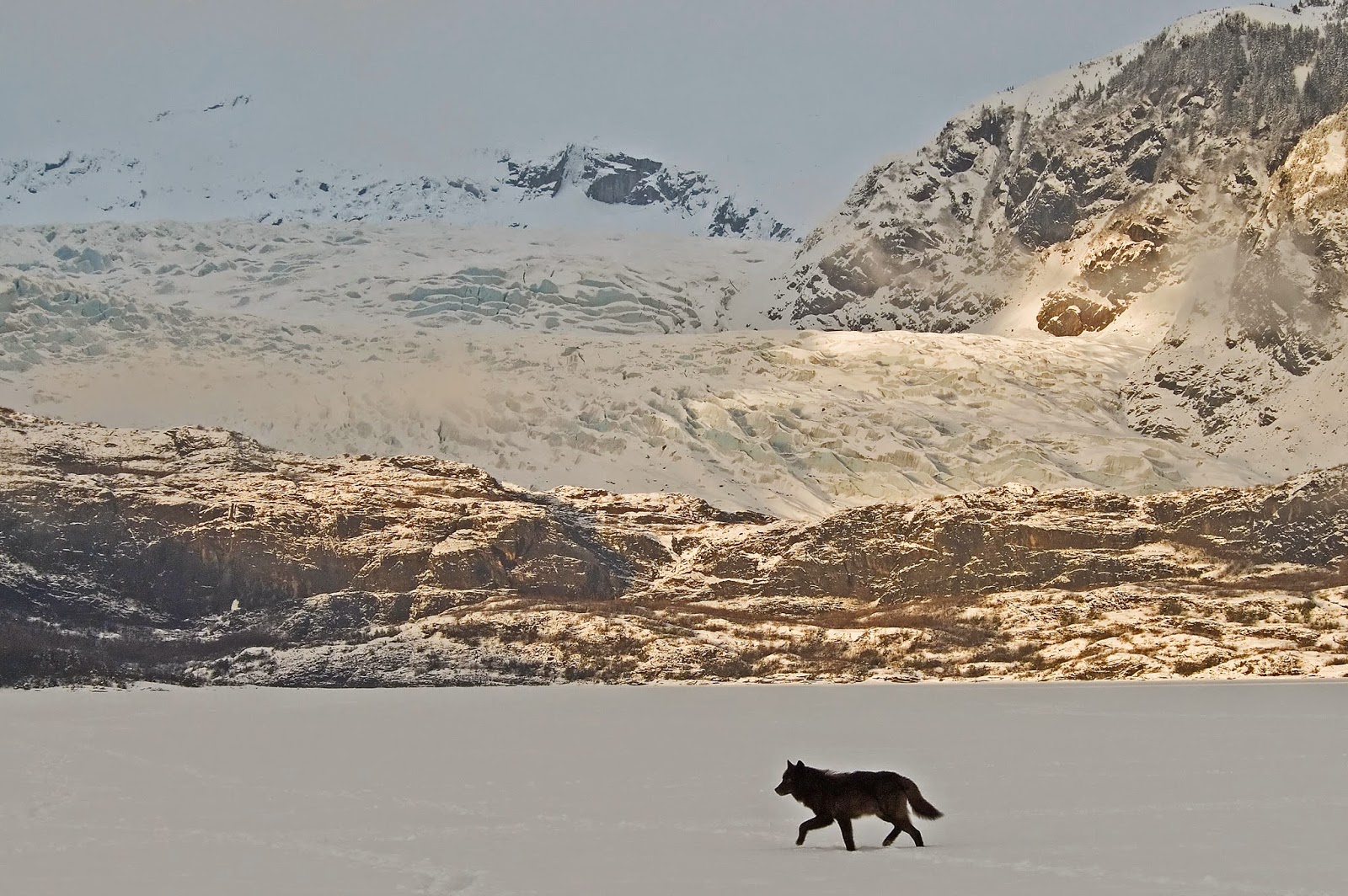 That’s
quite a cover shot—a huge, wild Alaska wolf and a Labrador retriever facing
each other. What’s the story on that? That’s the actual photo
from the opening scene of the book, the first time my wife, Sherrie, our dog,
Dakotah, and I met the wolf we’d come to call Romeo. He’s two years old there,
totally relaxed with us standing there just a few feet away, shamelessly flirting
with our dog. Even with a picture to prove it really happened, this moment, and
the years that followed seem unreal, like something we dreamed. That’s the
thing about the entire experience. Even with pictures to anchor our memories,
it still feels as if our lives were folded into a story, a series of events too
vivid, compressed, and emotion-laden to be real.

So
what was different about this one black wolf, the one you and others came to
call Romeo? He might as well have been a unicorn. A
120-pound wild wolf just shows up one day, and wants to play with our dogs, and
is tolerant of people, even friendly to some. He’s intelligent and interactive
and social. Yet the whole time he remains a wild wolf, hunting for his own
food. He didn’t become habituated to people; he arrived that way, as if he’d
fallen from the sky. You could suppose he was the archetypal wolf that came to
lie by our fire millennia ago and became, through domestication, man’s best
friend. Despite constant threats, he managed to live in the collective shadow
of 30 thousand people for six years—and it would have been longer if not for
the dark side of human nature, embodied by the two losers who killed him.
Except for that last part, the entire story was magical, one of those
experiences that transforms not just individuals, but an entire community.
We’re talking about a wolf that ends up with two streets named after him, as
well as a coffee and a beer. More than a hundred people show up at his memorial
service, and a plaque is erected in his memory. Stuff like this just doesn’t
happen. But it did.
It’s
a standard question, but what was your purpose for writing this book? This
was a story I needed to tell—not only to others, but to myself. Writing has
always been an exploratory process for me, a path toward understanding. Clarity
of thought equals clarity of word, and vice versa. Finding the exact words to
convey a narrative—and by that, I mean words that are so transparent and
evocative that the reader is looking over your shoulder and sharing in your
emotions as if present—is the ultimate therapy for me, a way to discover
meaning. And this particular story, which spanned more than ten years, a major
chunk of my adult life, seems to lie at the very core of my being, for better
and worse. I needed to understand all I could about this wolf and the complex
web of events that his appearance created, for my own sake. Romeo’s been gone
for nearly five years, and I still find myself choking up at odd moments,
waking up in the middle of the night, just lying there, thinking about him.
It’s not one of those things you get over.

I feel, too, that this story is something others need
to hear. It contains a universal moment of our time on this rapidly shrinking
world. We’re in the process of losing touch with the wild, as our inevitable
expansion and electronic isolation allows fewer and fewer spaces for it to
exist. What’s a world without tigers, polar bears, and wolves, without that
sort of elemental connection that large wild carnivores offer us, the
caretakers of this little rock? I’m afraid we’re well down the road to finding
out. Probably too much to ask, but I do hold the profound hope this book will
help make a difference. Without hope, nothing happens.

My final reason for writing this book is to bear
witness to the life of this one remarkable wolf. As long as a single person
reads, hears, or remembers his story, Romeo lives. Perhaps that’s what matters
most of all.

Nick Jans is a longtime contributing
editor to Alaska Magazine, and a member of USA Today’s board of editorial
contributors. He’s published hundreds of articles in a wide variety of
magazines, from Readers Digest to Rolling Stone.  He’s also contributed to many anthologies and
written 11 books. His latest two are Once Upon Alaska (a children’s book with
photographer Mark Kelley) and A Wolf Called Romeo (Houghton Mifflin, July
2014). Upcoming projects include a just-completed collection of essays and a
long-simmering novel. A former resident of both the arctic and Juneau, Nick and
his wife, Sherrie, now make their home in the Chilkat Valley north of Haines.
Views: 118