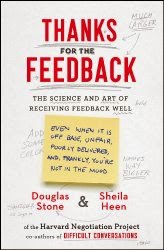 As I write this, I’m sitting in a café on Broadway in New
York City, preparing for a round of meetings with my editor and publisher. No
doubt they will give me feedback on my novel, BEHAVE, which they will be
publishing in the next one to two years. But I may find myself ferreting out
additional feedback, not only to facilitate revision, but to continue learning as a writer.
Expertise acquisition theory stresses that mastery comes from deliberate practice (ten thousand hours or more) aided by feedback, especially
coaching. My desire for improvement and my fascination with craft,  teaching, and the publishing industry all
motivate me to ask for feedback whenever possible. But that doesn’t mean I’m
good at receiving and interpreting
feedback, or dealing with my own emotional reactions to what I think I’ve heard. That’s true of most
people, not just creative writers plagued with artistic and economic anxiety.
To that end, I found time on the flight to NY to read Thanks for the Feedback: The Science and Artof Receiving Feedback Well (Even When It Is Off Base, Unfair, Poorly Delivered,and Frankly, You’re Not in the Mood) by Douglas Stone and Sheila Heen. Some
of the authors’ key points:
Wiring matters, and acknowledgment of our own particular set
of buzzing wires and inner alarms can be freeing. People have wildly different temperamental
baselines, “swing” rates (how far up or down from baseline one moves following
feedback) and sustain or recovery rates. Stone and Heen cite a researcher who
claims that the amount of time that we sustain positive emotion, or need to
recover from negative emotion, can differ by as much as 3000 percent across
individuals.
Mastery of the feedback process, the authors tell us,
includes “how to recognize and manage our resistance, how to engage in feedback
conversations with confidence and curiosity, and even when the feedback seems
wrong, how to find insight that might help us grow. It’s also about how to
stand up for who we are and how we see the world, and ask for what we need.”
Why is receiving feedback hard? Because of the tension
between the desire to learn and the desire to be accepted as we are. Hearing
criticism can feel “less like a ‘gift of learning’ and more like a
colonoscopy.”
The authors argue that the ability to receive feedback “is
not an inborn trait but a skill that
can be cultivated.”
Step one is recognizing some of our triggers.
“Truth triggers” are in response to what we think of the
substance of the feedback itself—whether it’s unhelpful, slightly off, or
totally untrue.
“Relationship triggers” are tripped up by the person who is
giving the feedback.
“Identity triggers” focus not on what’s said or who is
saying it, but on us and why
feedback, correctly or incorrectly interpreted, threatens our sense of self and
what we hold most dearly.
When it comes to writing, my strongest reactions probably come
from category three. It’s all too easy to hear minor criticism—or even praise
misinterpreted as criticism—as something that threatens my future ability to
write and publish. Especially when I feel a lack of control (with the
publishing part in particular) I’m more likely to globalize, lose perspective,
or think catastrophically.
Authors Stone and Heen explain common reactions to feedback
and why we are often bad at soliciting, hearing, or using it. Just knowing that
some of my reactions are normal helps me commit to noticing my own particular
problem areas: for example, when I get an email with editorial feedback, I
often skim over the positive parts, barely reading or assimilating them, in
order to get to the negative or simply constructive “let’s get to work” parts.
Also, fresh criticism (even when it’s barely critical) about
things that matter to me and my perceived future sting me the most. I’ll often
find that a document or email that seems critical to me on first re-reading
transforms after re-reading a day or two later into balanced, more
constructive, more nuanced, and even highly positive feedback. The difference
between my first and final impressions can be shockingly distinct. It’s
important that I recognize my own blind spots, and like a driver checking over
her shoulder before changing lanes, use time—and sometimes a second reader—to
my advantage.
Authors Stone and Heen distinguish between different types
of feedback: appreciation (“you matter”), evaluation (“this is where you
stand”) and coaching (“this is how you can learn and get better”). Just
breaking it down helps me realize that when it comes to feedback on  my latest manuscript, I don’t particularly
need #1, and I’m likely to hear (and should heed) #2 (“this is what we think of
your manuscript and its chances in the marketplace”). Whether from peers or
from a publisher, I may not get #3—big picture coaching on how to be both a
better writer and advocate of my own work—and so I may need to ask for it
explicitly.
Running out of time now – meetings due to start—but one last
thing before I go. Stone and Heen emphasize that feedback has two parts: the
feedback itself, and how we react to it (a second score of how we handled the
first score). On a performance evaluation, in a discussion about a personal
relationship, or in a manuscript review, we may only get a “3 out of 5,” for
example. But we can aim to get a better score (as determined by ourselves) in
our response toward feedback:
listening carefully and purposefully, maintaining perspective, being clear
about our own  needs, seeking
clarification when necessary, and coming up with an action plan for
improvement.
Views: 16

2 thoughts on “Andromeda: Learning from “Thanks for the Feedback””