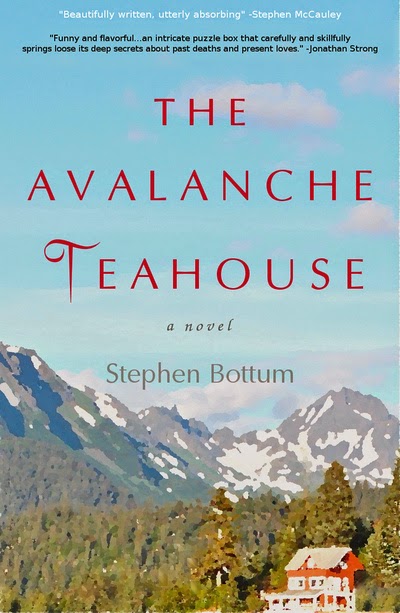 “To
Cora, the gift was somehow more touching for being incomplete. Any mountain
person would appreciate the hard work falling short of the desire. This
half-built hot tub could be a twin to her own half-sewn quilt. Two new sprouts
in the garden of good intentions.
“Up close, it looked like a teacup built for a giant. The
missing side was where the handle would go. In a land of instant, senseless
death, it wasn’t hard to believe they all lived at the whim of an indifferent
colossus. Cora could imagine age-old aches and long-clenched tensions relaxing,
melting away as she brewed herself in there.” (The Avalanche Teahouse, Stephen Bottum)
From the author of the website Armistead Maupin called
“my favorite culture blog,” comes this enthralling novel about risk,
rescue, and the perfect chocolate cake.

Cautious,
sensible Cora and her brisk, no-nonsense mother Blanche run the last of the old
mountain teahouses, six miles up a tough trail. Helped each summer by two
snappy, fearless college girls, they bake simple food for weary hikers,
daredevil rock climbers, and the seven-man mountain rescue team. After years
away, Hap, the hero of her youth, has just returned to rejoin the emergency
crew. Despite her private hopes Cora stays in the safety of the cabin, serving
tea to a world of travelers. Finally two very different strangers press Cora to
rethink the past and take a far greater risk. Against a powerful landscape,
contrasting danger seekers and everyday domestic hurts, this funny, generous,
unsentimental story explores the true nature of who really rescues whom.
“The Avalanche Teahouse is a beautifully
written, utterly absorbing novel. I was transported to the remote mountain
setting by its first masterful paragraph and even now, days after reading the
final page, have not been able to leave.” -Stephen McCauley
“…a
funny and flavorful portrait of a mountain refuge for hikers, is also an
intricate puzzle box that carefully and skillfully springs loose its deep
secrets about past deaths and present loves.” -Jonathan Strong

“…combines the delicacy of a fable with the scope of an epic…this
warm-hearted, tough-minded story…is just the tale for our troubled
times.” -James Morrison

Stephen Bottum, formerly a vice president at a major
publishing house, has reviewed fiction for Entertainment Weekly, written for local New York media,
and been asked to guest lecture to journalism students at Johns Hopkins. He has
run distance road races or marathons in Australia, the United States, and
Europe. An Alaska resident since 2010, he is a member of 49 Writers. The Avalanche Teahouse is
available as an ebook from Amazon.

Would you like to see your book featured here? Check out our Spotlight on Alaska Books guidelines and submit today.
Views: 14