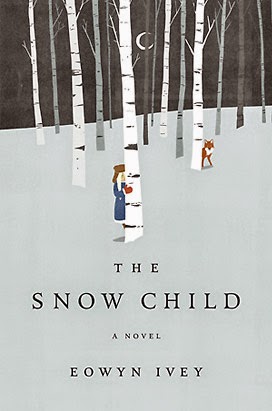 After this post first ran at 49 Writers in March of 2011, Eowyn’s novel debuted to worldwide attention. In 2013, her book was nominated for the Pulitzer Prize in fiction.

When I first began work on my debut novel, The Snow Child, I knew I could work fast because the idea was so clear in my mind. But I wanted structure for my writing time, and as a former adrenalin-junky journalist, I needed deadlines.

In the meantime, my mom, Julie LeMay, was recommitting to writing poetry. So we hatched a plan — each week we would swap a chapter for a poem. They would obviously be rough drafts, but we wouldn’t get hung up on that. We would just keep going, week to week. I’d read her poem, she’d read my chapter. On to the next.

At the end of a year, I had a nearly completed manuscript and, against all odds, a terrific New York literary agent had offered to represent me. In the meantime, my mom had more than a dozen polished poems, and she began submitting them to literary publications.

Now, a couple of years later, my book has sold to a dream publisher — Little, Brown, & Co. Several of the poems my mom wrote that year have been published in national literary magazines, including Karamu and Pilgrimage, and she is applying to graduate school for her MFA. Not too shabby, if we may say so ourselves.

Looking back, I’m still impressed with what we got done. We both had to be in the right mind set. And we had to follow the rules.

Commit to the plan. In the face of all life’s upheavals and pressures, we would make every effort to give new work to each other weekly.

Make feedback specific and generous. We could only say what we liked about rough draft chapters and poems. If one of us revised our work and asked for a tougher critique, then we would give it.

Put it in writing. We both took the time to comment in writing on each other’s manuscripts, and write a few sentences, sometimes more, about our overall impressions.

A quick turn-around. We gave comments to each other before the next week’s work was due. The thoughtful encouragement helped feed the process.

There were some downsides. My mom is a poet, I’m a novelist. Our difference in forms sometimes made detailed critiquing difficult. At the same time, it eliminated any threat of envy or conflict over how a poem, or a novel, should be written. Instead, we each tried to react as a grateful, intelligent reader.

Most writers are capable of that at least– of being there with a kind eye. That’s why I think this could work for other people as well. And while it helps that my mom and I live in the same town, I actually think it could succeed long-distance through email or even snail mail.

From my experience, it isn’t the same as being a member of a writing group or hiring a professional editor. It’s not about revision and fine-tuning. It’s about committing to writing. It’s very similar to having a running partner. You don’t have to be the fastest or the most competitive. You’re not looking for someone to blow a whistle at you or holler for you to get your knees up higher. You just have to show up each morning with your running shoes tied and, if you can manage, a tired smile. It’s about commitment and companionship. And it’s just the first step toward running a marathon or getting published.

I’m curious if anyone else has developed a similar partnership, and what rewards and pitfalls came along with it.

Eowyn Ivey’s debut novel THE SNOW CHILD was published in November of 2012 by Little, Brown & Co. When this post was first published in 2011, she was working as a bookseller at Fireside Books in Palmer.