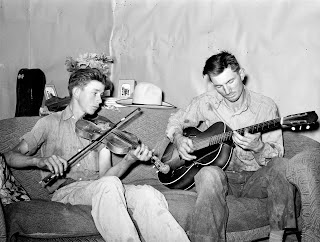 I heard my
Granddad tell the story four separate times.
One
evening when he was sixteen years old my Granddad, Clarence Acree, (nicknamed
Sonny at the time) was at his Uncle Bill’s house in Sayre, Oklahoma. It was
late in the day, well after supper, and they were sitting in the main room
playing fiddle and guitar.  Maybe it was
the music that kept them from hearing the twister approach, or maybe the storm
just moved so fast that they wouldn’t have heard it coming even if the house
had been silent. Either way, they had no warning. In an instant it sounded like
a freight train was on them, and while they sat there, instruments in hand, the
roof of the house was pulled clean away. Just like that.
Everyone
at Uncle Bill’s house was okay, but the storm moved on and they could hear its
continued destruction. After it passed they went out to assess the damage.
Here’s
article from the Sayre, Oklahoma Daily dated October 16th, 1933
about the incident:
AGED COUPLE AND LITTLE
BOY DIE IN VIOLENT WIND
“A freak cyclone
covering more than one mile in length approxamately 100 yards in width struck
south and four miles east of the city after 10 ‘clock (pm) Saturday left
death and destruction in its wake. The dead are: Frank Yandell 77, Mrs.
Frank Yandell  72, Luther Lowrence 8.
A fourth person Nadene
Lowrence age 7, with the victims of the violent wind, escaped death.
Except for shock she is not thought to be seriously injured. The two youths are
the great grandchildren of Mr and Mrs Yandell. They were spending the
night at the Yandell home. Mr and Mrs Lowrence live near the cyclone swept
area.
Preceding a heavy
rain, the storm swept down on the Willis Hawkins farm tearing the roof and
porch off the Hawkins home and razzing a windmill. The storm then gained
in velocity and traveled in a northeasterly direction hitting the Yandell
farm and the spent itself as it the struck the John Edwards farm one mile away.
The Yandell home and all the outbuildings were completely demolished. A barn
and garage at the John Edwards farm was leveled.
The bodies of the dead
were found 175 yards from the wrecked home by Clarence Acree and Willis
Hawkins, nearby neighbors. Seeing the residence demolished they shouted but
received no replies. Checking with nearby neighbors 1/4 mile away they
were assured the Landells or the Lowrence children had not escaped.
Walking back in
the dark to the demolished residence the boys shouted again and the little girl
called to them from a field.  An ambulance was summoned and the four were
brought to Sayre.  The dead were taken to the local mortuary and the
little girl was rushed to Tistial Hospital for treatment and examination. She
told them Mr Yandell and her brother had gone to bed and she and her great
grandmother were getting ready to retire when the cyclone hit the house. She
could not remember anything after that.

The bodies of the deal
were badly crushed and mutilated. And lacerated. They appeared to have
died instantly.”
* * *

It’s funny
how we hear stories in the context of our own lives. We grab hold of different
parts. We notice different things.
The first
time I heard my granddad’s story, it was all about the violent storm, such
force I could scarcely imagine. He told about the bald chickens running around
the farm the next day—the force of the wind had plucked them clean. He said a
nearby bridge had been impaled by a piece of straw.
The second
time I heard the story, I thought more about the little girl. My Granddad said
they’d given up hope of finding anyone alive and were headed back to Uncle
Bill’s house when they heard her.  She’d
been carried nearly a hundred yards from her great-grandparent’s home, her
nightgown had been pulled off in the storm, but she was uninjured. I wondered,
how was it to live a life as the one who had been spared? Did she remember my
grandfather finding her or was her shock too great to remember that
detail?  Did she move away from tornado
country the way my Granddad did?
The third
time I heard the story I fixated on the time in history when the storm took place.
A time when families sat down to play music together instead of huddling in
front of a television, a time before tornado warnings and forecasts. I thought
about my own family history of fiddle players and Okies. I tried to tie who I
am today with the people I came from.
The last
time my granddad told me the tornado story he was ninety-one years old. I was
back in Colorado for a visit and I asked him to tell me the tale one more time because
I knew the time for hearing his stories was running out. Always before when
he’d told me the story, he was very matter-of-fact about it—first this and then
that.  But this time it was different. It
was like he was there. He was sixteen again, in rural Oklahoma, with his Uncle
Bill. He was walking through the rubble, trying to make sense of the
destruction that came through in an instant and changed everything. “We thought
they were all dead,” he said. “And then I heard her call out. ‘Sonny,’ she
said. ‘What are you doing out here?’” Then he couldn’t tell any more. His eyes,
still as sharp and as blue as ever, watered up and he turned his head to the
side.
That
fourth time, the story was about my Granddad—about the man he was and the boy
he’d carried around inside of him for all of those years.  It was about time and distance being erased
for a while and being young and being old all at the same time.  It was about transcendence and remembering
and living again and again.
Teresa Sundmark lives in Homer, Alaska. She has
an MFA in Creative Writing from UAA. Her work has been featured in Cirque: A Literary Journal for the North
Pacific Rim and is forthcoming in Stoneboat Journal. Her essays
have been syndicated through High
Country News. This piece first appeared at loftyminded.com where Teresa blogs
about writing, small town life and various other subjects.
*The
photo “Farmer and His Brother Making Music” was taken by Russell Lee in 1940
for the Farm Security Administration in Pie Town, New Mexico.
Views: 15