Membership
Menu
Southeast Alaska is rainforest country, where water substantiates the world—even trees, there, are shown to contain molecules from out at sea delivered inland in salmon. Its lush fecundity translates into a literary watershed, too—many great writers and scholars hail from Gustavus, Haines, Juneau, Sitka, Ketchikan, and points between. Lately, the roster of 49 Writers members, not to mention board members, who hail from Southeast Alaska has boomed. Fitting, then, that my excuse to go see many of them—familiar ones and strange alike—comes in the shape of my debut book.

Poetry books weigh less than prose ones, usually – mine, called Overwinter, certainly does. You note that kind of detail while stuffing raingear and extra socks around stacks of them in a carry-on destined for the overhead bin. I’ll head to Juneau shortly after launching the book in Anchorage (unless I oversleep). From there, I’ll spend some quality time with the M/V Aurora and the M/V Matanuska heading up to Haines, Skagway, and back.

I’m a sucker for good pairings of place and people, and I’m excited to enjoy both in Southeast Alaska while I shed some Overwinter pounds. I’ve already placed a request for a birds-eye, window-seat peek up Lynn Canal on the descent into Juneau, a little overview of the ferry route I’ll begin the next day. Hopefully the weather won’t be too overcast.

The first stop on the tour will be a joint reading in Juneau on March 19 with poet Emily Wall, professor and chair of the Alaska Literary Series (ALS) advisory board. Edited by Peggy Shumaker, ALS is a University of Alaska Press series, which I’m overjoyed to say is responsible for publishing Overwinter.

In Haines, I’ll give a reading at the library followed by a reading-in-the-round event that welcomes anyone to share a poem or short piece of prose if they’re so moved – so bring your words, people, or just come to listen. The good library folks in Skagway will also host a reading and book signing (and with luck, I just might finally make it out to Dyea). I’ll return to Juneau to teach a two hour 49 Writers class on reading poetry (unless the ferry captain overshoots the dock… or I fall overboard).

This class will be a bit different from our usual writing classes, though, geared as it is toward readers of poetry, which includes, of course, both those who write it and those who don’t. Don’t overthink it – if you’re in Juneau and feel overwhelmed by poetry, or overcome with love for poetry, or maybe you find it overwrought, overblown, or maybe overdue in your life, come on out. Learn more (do your research and don’t just rely on what you overhear) and register in advance. Details about all these events, and others coming up out of state, can be found over here.

Heading down to Southeast to share my first book will feel a bit like coming full circle. My first, and some of the most formative, experiences in Alaska occurred down south. The Tongass was the country of my imagination and dreams. Eventually, I sailed from Bellingham to Alaska on a little 24 foot sailboat. For a long time I imagined ending up down there, and a large part of me still responds to the wild combination of salt water and mountains, evergreens and intertidal zones, and increasingly to the Southeasterners I’ve come to know.

I suspect my younger self would have been surprised to know that I would fall hard for the Wrangell Mountains, so far inland. My cabin near McCarthy in Eastern Alaska, in the scheme of things, isn’t too far from the wild rock-and-ice knuckle attaching the panhandle to the rest of the state. Wrangell-St. Elias National Park even abuts Glacier Bay National Park (not to mention Canada’s Kluane and Tatshenshini-Alsek). Still, it is a world away.

In a sense, reading Overwinter feels like time traveling, written, as it was, over the course of several years. The views on the flight from Anchorage to Juneau can often give the sense of time travel, too, with its jets-eye Pleistocene flyby of the Bagley Icefield, the tall peaks of the Wrangells and St. Elias, and the Malaspina Glacier, and more. Heading up to Haines, Skagway, and back on the ferry will also feel, I think, a bit like traveling back in time in my own short life. It’s been almost twenty years since the first time I was on that stretch of water.

Maybe I’ll spend some hours on the ferry writing from within that sense of parallax, the slippage between thens and nows. Or maybe I’ll just look at the deep water meeting tall mountains, and at the weather and birds, hopefully hard enough to remember it well. In any case, see you soon, Southeast! 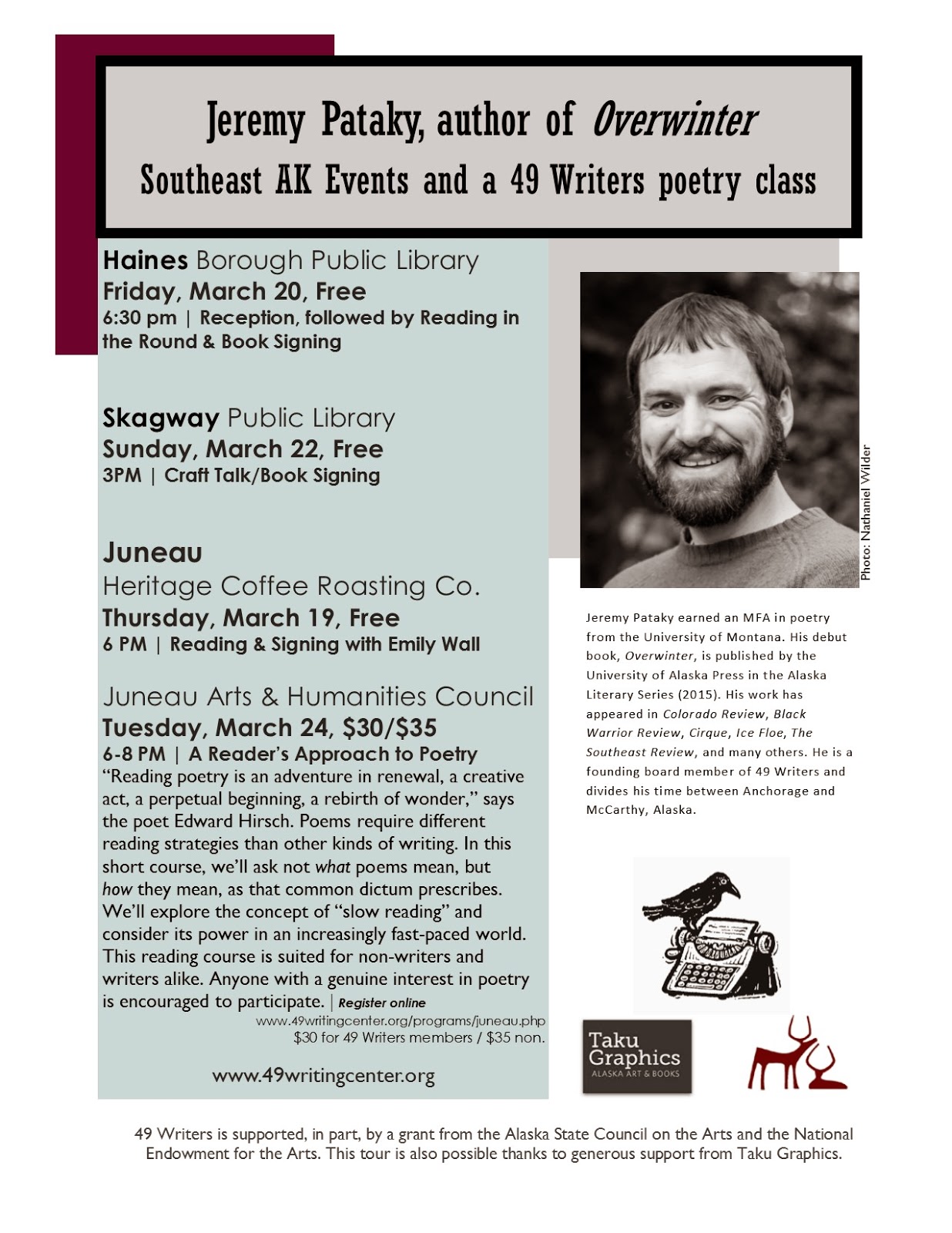 Jeremy Pataky is the author of Overwinter (University of Alaska Press, 2015) and a founding board member of 49 Writers. He earned a BA at Western Washington University and an MFA in poetry at the University of Montana. He divides his time between Anchorage and McCarthy, Alaska.