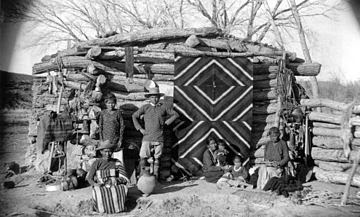 In the first half of the 1800s hand-woven
Navajo blankets were typically coarsely woven and very plain. They featured the
natural color of sheep wool with perhaps a contrasting stripe or two at the
edges. During the last half of the 1800s Navajo weavings (increasingly smaller
carpets rather than blankets) were frequently high quality, multicolored, and
complex in design. Moreover, distinct regional variations emerged throughout
the reservation. Well into the 20th century no one had a very good explanation
for this extraordinary transformation.
During the latter part of the 1970s I was
researching and writing a book on Navajo economic history 1850 – 1970. I
focused on three significant Navajo industries: weaving, jewelry making, and
sheep herding. I was more interested in Navajo weaving as an emerging
commercial product rather than its transformation as art or craft, but still,
it was an interesting conundrum that intrigued me. Here is a little background
on Navajo history:
Through the first half of the 1800s Navajo
people settled in a huge swath of the southwest in what is now Arizona, Utah,
New Mexico, and Colorado. During the early 1860s Navajos were blamed for raids
on soldiers, settlers, and shipments of gold from California headed east to
fund the Union in the Civil War. The United States waged war on the Navajos in
1862, and by 1863 had moved thousands of captured Navajos to Bosque Redondo, a
huge outdoor internment camp in Southeast New Mexico.
The Navajo people were released in 1868
and were allowed to occupy some of their former lands, but they found only
devastation. The soldiers had killed most of the sheep, burned the orchards,
and destroyed facilities. The Navajo people found themselves largely dependent
on white traders who were setting up trading posts throughout Navajo lands.
When I was doing my research in the 1970s
it was generally understood that during the latter part of the 1800s Navajos
traded sheep products, jewelry, and woven rugs with traders in return for food
and manufactured items. I prowled through libraries and archives in New Mexico
searching for detailed information about Navajo industry and trade in the
latter part of the 1800s. Nearly all the useful information I found was hidden
in obscure diaries and memoirs written by the wives of the white trader
families. Their stories helped me find important information about  economic activity, but also helped me solve
the mystery of the changing Navajo rug designs.
Beginning in the late 1870s railroads were
constructed in close proximity to Navajo lands. Tourism thrived at the margins
of Navajo lands, and increasingly Navajo arts and crafts were shipped all over
the country. But here is a crucial point: the trading posts located throughout
Navajo lands were not, as often imagined, operated as marginal entities by
disaffected loners. They were in reality chains of outposts or franchises of
major national and international companies buying and selling commodities on a
worldwide market.
During the latter decades of the 1800s
these corporations were involved in a huge trade in Persian carpets from Iran,
but they were very expensive and had a limited market. Corporate visionaries
saw Navajo weavers as a potential source of cheaper Persian-like carpets, if
only the Navajo weavers could be disciplined to weave in this particular style.

Traders’ wives wrote in their diaries and
memoirs how this was done. The home companies sent Persian carpet catalogues to
the traders, and the traders would rip out a page and give it to a Navajo
weaver and tell them to weave that design with those colors, or the trader
would not buy their weaving — a very serious threat in isolated Navajo lands.
Some traders distributed more durable linoleum tiles that featured Persian
carpet designs.
The international trade in Persian
carpets, and the control of corporate franchise traders over Navajo weavers
combined to transform the craft in just a few short years. This mystery would
not have been solved without the detailed stories of the women traders. Their
important documents would not have been saved and catalogued without the
meticulous work of librarians and archivists.
~~~
I would like to invite you to take my
class, Historical Research Sources for Writers. In this half-day class we will
review online and local sources for historical research of narrative material
and images. The focus will be on Alaska materials, but many of the resources
are national in scope. We will review national newspaper archives, UAA and
State of Alaska historical holdings, federal holdings, community museums and
historical societies, interview techniques, and other sources for historical
material for writers. Our priority will be free and low-cost resources.
New date: Saturday, April 4, 9am-12pm (3
hours)
Location: 161 E. 1st Ave., Door 15 (Alaska
Humanities Forum)
$50 member; $60 non-member
Register at: http://www.49writingcenter.org/Instruction/classes.php
Views: 28