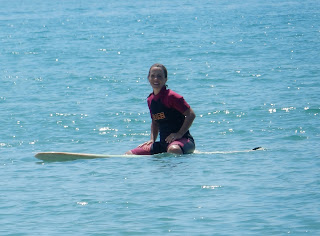 When I
asked Manuel for a surfing lesson, he made this suggestion: Go today, take the boards, don’t try to
stand up, just catch the waves on your belly, get a feel for the ocean, and then
I’ll see you tomorrow.

I wasn’t a total beginner. I’d surfed three times in three different places. But I needed help. “Yo
soy lo peor,” I beseeched him. I am the
worst.

My surfing,
if anything, had been going backwards from a strongish but reckless start in
Bali, where I was thumped and tossed by big waves, cut by rocks and corals,
and kept safe–just barely—by local guides who were more interested in flirting
with young tourists and catching a few waves than giving clear instruction.
They were fun-loving guys with great temperaments, and I enjoyed hearing them
chat happily in their clicky and melodious local tongue, but they never
bothered to learn my name and didn’t bother to diagnose my repeated mistakes.

Thanks
to those Balinese guides, I did avoid drowning and I managed to stand up briefly on my 43rd
birthday, accomplishing a dream, but only halfway so. Yes, I could claim I had
surfed, but the process had been painful, confusing, and downright scary. I
couldn’t even say for sure if I liked surfing.
When a storm thrashed our hut the second night, promising wind and perhaps even
bigger waves, I gladly used it as an excuse for skipping the 4 am wakeup call
to go surfing again the next day.

My feelings
about surfing were so mixed that a year later, when I was in Todos Santos,
Mexico with my daughter and her friend, I waited until the last half-hour to
borrow my daughter’s rented board. The waves were smaller here, the sun was out, and
under the bubbling surf was soft sand. It was a more forgiving environment, and
in thirty minutes of trying to catch any wave that came by I actually stood up
again, however briefly. My favorite part was surfing in the shallows next to
young local children. They didn’t mind falling and didn’t bother with the big
waves. I learned something just from watching them and we shared a lot of giddy
smiles.

For years,
my sports metaphor for writing was the marathon: just put one foot in front of
another, take breaks when you need to, and the finish line is within even a
novice’s reach. But this year, I switched my metaphor. Writing, after
the first many tries and even after some successes, can remain, like surfing, frustrating and elusive.

During that
first Bali surfing trip I took big chances and without even understanding what
I was doing, threw myself toward a goal and achieved it. Or sort of. With my
first novel, I skipped the typical apprentice’s wind-up (no short stories, no
simply-structured, autobiographical tales set in familiar locales) and wrote The Spanish Bow, a door-stop that took
place over a century, in Europe. Part of what made it easy was
that I didn’t know it should be hard. I went into the zone, became my main
character, and told his life story, infused with my own passion for cello, the
visual arts, and 20th century politics. It was published at home and
abroad, got some good reviews, launched me on a career path, and earned me
some money. All good.

But as with
surfing, I had managed to do something without understanding fully the domain
and the many available techniques. Follow-up novels using different POVs and narrative
structures proved much more difficult. Like my brief second try surfing Todos
Santos, I was able to pull off a follow-up, and had fun in the process, but
after all was said and done, I still felt anxiety and frustration. If anything,
my confidence was dropping. In the ten years following the writing of my first
novel, I came to know more about literature and creative writing, and my
journey as a writer began to exhibit Xeno’s paradox: with every step, you are
only halfway closer to your destination. You will never arrive.

In San
Juanico, three weeks ago, I tried surfing again, in a beautiful, soft-sand bay
in a remote stretch of Baja. It was a long trip to make for a short weekend,
and we were there to show the place to a visiting friend–a young, strong rock climber who would probably pick it up
quickly. Why should I even rent a board? Mostly to determine, once and for all,
if I was ready to put surfing behind me. But had I really tried? I’d stood up
for three to five seconds, but had I really done
it? What is surfing, anyway? What is writing? What is life?

That short
attempt was hampered by light wind and lack of waves as well as our lack of
know-how about where to position ourselves, given the imperfect conditions.

Which
brings me to San Juanico trip #2, a few weeks later, and surfing attempt #4. By
this point, I was unhappily obsessing. How much better it would be if I could
just be sure I hated surfing and didn’t have to keep trying!

But I had
Manuel, a local instructor who would promise to show up the next day. All I had
to do was spend my own day getting comfortable with the ocean again, and then
he would come with more specific tips the next morning. That’s exactly what he
did, taking charge from the moment he pulled on his sleek wetsuit, telling me
in greater detail than I’d ever heard before about how to enter the
water with minimal bruising, how to understand the set patterns we were seeing, how to watch
for the oncoming wave, how to dodge waves that were too big, when precisely to
paddle with my arms, how to ride on my front as an incremental learning step, when
to go for it and stand up. He was articulate and specific, but he knew just
when to stop talking technique and simply emphasize repetition: “Don’t think so
much, just do it.” His encouragement was sincere and emphatic: “This is your wave, Andromeda. Here it comes.
Look at it, look at it. Start paddling. Faster. You’ve got it. Go!”

At one
point mid-morning, I must have mentioned I would never be good at surfing. He
said, “You don’t have to be good at it. You just have to enjoy it!”

That day,
surfing alongside my husband, daughter, and her boyfriend, I truly enjoyed it—truly
felt like I was doing it—for the
first time. I loved feeling the ocean and watching the sparkling waves come in.
I dunked and got thrashed many times, but I didn’t feel like I was drowning. I occasionally moved
away from Manuel, toward deeper water, to try timing and catching my own waves. I moved
back toward him when I was ready for more advice. I switched out my big foam board
for a few tries on a sleeker fiberglass model. With every attempt, the
environment itself was seeping into me, and even when I was doing nothing more
than sitting on my board, eyeing the far horizon for a new set, I felt like I
was experiencing something spectacular.

The tide
rose and the waves gave out before I did. I felt lucky just to be out in this
miraculous domain, and I will try to remember that feeling this fall as I
embark on revising a particularly tricky novel: just enjoy being part of this. Our efforts are so small and our
progress incremental and inevitably unfinished, but wow, what a thing to be
trying, what an environment in which to be trying it. What a miracle, and what an
honor.

The journey
more than the destination; try and try again; get past the fear and
self-judgment; immerse and enjoy; this is your
chance, go for it. I know these
are obvious and trite life lessons. But I have to learn the basics again and again,
in new contexts, and sometimes with the help of new teachers, in order to trick
my stubborn brain into paying attention.

Thank you,
Manuel. And to those of you who are spending the summer surfing or writing:
hang loose.

Andromeda Romano-Lax is the author of The Spanish Bow, The Detour, Searching for Steinbeck’s Sea of Cortez, and the forthcoming Behave (Feb 2016). She is a co-founder of 49 Writers, a book coach, and a member of the UAA MFA fiction faculty. Her website is www.aromanolax.com.

2 thoughts on “Andromeda: A Writer in the Waves–Lessons from Surfing”