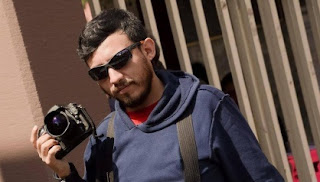 Last weekend, Mexican photojournalist Ruben Espinosa was killed in Mexico City, after fleeing threats to his life in the state of Veracruz. He is the fifteenth journalist killed in Veracruz during the reign of its current governor. From all accounts, Espinosa wasn’t about to spill the details on some massive expose, as one would expect in a Hollywood version of this tragic story. His offense may have something quite innocuous, like taking an unflattering photo of an important official in power. That Mexico has become one of the most dangerous places in the world to practice journalism — even though it isn’t officially a war zone–should give us all reason to pay more attention to what’s happening on our southern border.

I’ve lived in Mexico 6 months so far, previously in the state of Baja California Sur, where tourism partly depends on people believing that Mexico is a safe and happy paradise. And in places, it surely is. Without a doubt, it’s a place with amazing cultures, friendly people, vibrant cities, and soul-stirring wilderness areas. But it has its dark side, too, which some people –locals and visitors–prefer not to talk about too openly. I haven’t yet written much about my short residency in beautiful Baja, in a town that had no newspapers other than the Gringo “No Bad News” Gazette. When we left, Loreto was still a very safe place to be — probably statistically safer than Anchorage. But the first hints of change were coming.

I can point to a single week in May when I heard parents, friends, and friends of my daughter all admit that they were suddenly worried that La Paz, a big city 6 hours south of Loreto, was becoming a scary city. A critical point had been reached; denial began to crumble into worried admissions. In a matter of days, some shootings, tossed grenades (which failed to explode) and the discovery of dismembered parts in body bags all pointed to a shift in control of the city. The narco trade of Sinaloa to the east had managed to jump across the Sea of Cortez. Whether the cancer will continue to spread depends on the functionality and integrity of government in a peninsular state that is home to a profitable zone of beaches and resorts.

Don’t take my word for any of this. A personal blogpost is is not journalism. And –perhaps–don’t trust what is written in the local Mexican papers (in those places where newspapers even exist), where “facts” are often divorced from context. But where can one turn to find trustworthy accounts? This is the question I find myself asking from the state of Oaxaca, where I am currently taking immersion Spanish classes and living with a local family, a week before I move to the neighboring state of Chiapas, where my husband is already working a new job at a private school. Our family will be in Chiapas for one to two years. After 25 years of coming and going between Mexico and the US, I will finally get a closer-to-inside glimpse of this troubled and wonderful country, whose worst problems are very much tied to our vices north of the border.

I do believe that Mexico is reaching a crisis point, but that does not change my current desire to live here. I had the good fortune to visit Syria nine years ago, when it was remarkably stable. Places we visited then have been blown off the map. I shudder to think about what’s happened to some of the kindest people we had the pleasure to meet. The lesson in travel, as in life, sometimes boils down to : don’t wait, go when you can. And — one would surely hope — there is something worthwhile about being a witness. We are all witnesses to one thing or another, whether it is climate change, cultural and technological change, personal or national dramas. If you are reading this blog, it is most likely because you are a writer, and perhaps have written about one of these issues yourself, whether you’ve come at it from a public or personal angle.

This week in Oaxaca, narcotrafficking is discussed less than dead journalists, and journalism is discussed less than the local crisis involving 80,000 teachers in tense conflict with the government, a “lucha” or struggle that goes back many years. Marches are  common. Police and soldiers are omnipresent–even by Mexican standards. This morning, military helicopters flew overhead.

Asking about the teachers issue, which seems on the point of boiling over, I get one story from the lady of my house, a very different story from my Spanish teacher, and a much more personal story of fear from a quiet local woman with a more indigenous appearance, from a family of several teachers. We meet for daily English/Spanish “intercambio.” Our very first language exchange was supposed to be — according to her chosen topic — how to bake a cake. But having chosen that subject, her next questions for me were, “How you say…kidnap? How you say…hiding? How you say [church] bells ring? How you say shots? How you say…scared?” She was flashing back on incidents that happened back in 2006, the last time serious violence between teachers and government forces erupted, worried that the signs were here again, including military helicopters flying overhead. We never managed to get back to the baking theme. When do you focus on content, and when do you focus on grammar? I tried both. A week later, we are still working on the pronunciation of “scared,” which still comes out as “es-scarr-ed.”

Someday, this material may accumulate into a story. But the older I get, the longer I take to decide what I think, and the more levels stories seem to accumulate. There is an immediate story–say, the creep of narcotrafficking–and the subtler story beneath the story–including the possibility that some (absolutely not all) narco drama is a cover for other crimes–and the story beneath the story beneath the story–which, for me, is about how normal people deal with fear, denial, and everyday life, which does in fact at some point return to the subject I have never yet fully explored with my intercambio partner: how to bake a cake.

Because cakes are still baked, tacos and moles enjoyed, and dances danced. This week, in fact, I have been taking salsa lessons in a beautiful outdoor setting behind a large stone wall with an open gate through which we see, some days, protesters march by, and even more frequently, trucks roll past with an increasing number of soldiers and federales, taking up their positions in this occupied city of angry teachers, defiant citizens, and tourists both aware and willfully obtuse.

Andromeda Romano-Lax is a co-founder of 49 Writers, a teacher, and author of The Spanish Bow and The Detour, as well as the forthcoming Behave (February 2016).