Doesn’t every kid with a military parent wake up to a bomb in the backyard?
In our 1950s Los Angeles subdivision, we never heard the term PTSD. For most veterans, and the Jewish half of our family, WWII wasn’t discussed. But from Dad’s Celtic soul, stories leapt out, some in strange ways. Like most of his stories, there was a meaning to them beyond the obvious lesson. Here’s an excerpt from Emergency Rations:

Two planes were short-lived. We’ll Get By didn’t make it for long, and neither did the florid paint job dubbed The Pink Prostitute. But Flak Rabbit proved durable, though perhaps Dad’s fourth rule of war would be simply: Avoid Mannheim.

In the skies over that ancient German city on October 18, 1944, his journal reads: Direct hit through wing. No. 2 gas tank didn’t explode. Lucky landing at Limefield and 5 day vacation. Make it O.K.

Dad always minimized the fact that the plane was being shredded with shrapnel, and some other details, but you could tell the conditions of things in a roundabout way, if you were quick.

Violet, his step-mother, told me that when Dad came back from England, he was at a mental hospital in Santa Monica, with battle fatigue. However, he had enough wit to exert the Goodrich charm and get a stack of signed passes from the head nurse, so he could go into Hollywood to party.

While staying with Violet, Dad would fight hand-to-hand in his sleep. Mom said, even years later, Dad would leap up in bed and try to stop bombs from falling on her.

Early one Saturday morning I went to the back door of the house to look for the cat. I noticed a bomb had nosed its way into the dirt of the hill beyond the lawn. I froze. Two thoughts passed simultaneously through my mind and collided: 1) Is this Dad’s idea of a joke? and 2) What if this is real?

Weekend mornings, it was worth your life to wake your parents. I tiptoed toward the bomb. Definitely metal, it was nearly as tall as I was. Its painted numbers and letters looked American. But at that moment, I learned the language a bomb spoke was not the salient point. All that mattered was how close you were to it.

I did not slam the door. I rounded up my brother and sister and put them behind the wall in the front of the house, though I knew it was no help if the bomb decided to go off. But it kept them out of the way while I decided what to do next.

I steeled myself and woke up Dad.

“Yes, Becky,” came from behind the bedroom door.

I told him I hadn’t touched it or thrown anything at it. I told him the other kids were behind the wall in the front of the house. I added that I didn’t think that would really save them if it exploded. Dad’s jaw tightened. He looked at the bomb and nodded. There was just a flicker of a shadow in his eye.

“You’re right. But it was a good first decision.”

“Now do we call the police and fire department and evacuate the neighborhood?” I looked right at him, hard.

“No, Becky, we don’t.” A smile came to lurk around his eyes.

“Is the bomb real?” I pressed.

We walked up to it through the wet grass. “Oh, it’s real,” Dad said. He banged the side. It gonged. It was hollow. “It’s a real bomb casing.”

I saw the lesson: You can’t judge a thing by its cover. But sometimes you have to act as though it is what it seems to be, until you collect more information.

My father, Robert Stewart Goodrich (April 1925-October 2014), bequeathed a couple of writing projects to me. One is inspired by A Message to Garcia, and the other’s working title is A Nice Smile, Great Boobs, and 62 Years. I just know that, within each of these assignments, and beyond the doing, there is something, something, that he wants me to learn. 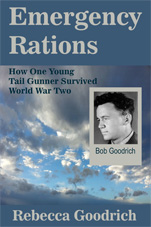 Consulting editor REBECCA GOODRICH jettisoned California for a houseboat in Dutch Harbor. Jerah Chadwick lured her into college. Goodrich wrote for The Dutch Harbor Fisherman, and became a stringer for KDLG. Dropping the Other Glass Slipper placed first in UAF essay competition. Two stories have been collected by master storytellers. Publications include Cold Flashes, F, Cirque, Ester Republic, Alaska Women Speak, and KNBA’s AK Show. Goodrich is writing her Dutch Harbor memoir. An interview on Radio Free Palmer, about PTSD and her first Smashwords eBook, will air around Veteran’s Day, 2015.

1 thought on “EMERGENCY RATIONS: PTSD and a Father’s Love by Rebecca Goodrich”