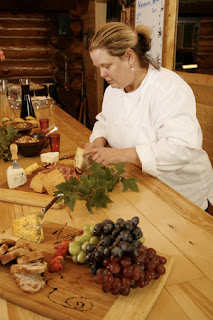 I settled onto the big white couch, wide enough to put my
feet up and rest my laptop comfortably for writing. I wrapped around a soft
fuzzy throw and held a warm mug of herbal tea. All ready to write a blog, I
thought, and on a topic particularly pleasurable for me–culinary writing. And,
then I turned on the television and saw the images from Paris.

My heart sank. With tension, anger and grief, I stared at
the television screen for nearly two hours, no longer comfortable but sitting
on the edge of the couch. I searched through repeating bits of news and
updates, perhaps looking for a voice that could comfort me or explain to me why
this had occurred. The white page on my laptop remained blank for the rest of
the night.
In the early morning, I turned the television back on and I
noticed that stations had already set dramatic music scores and colored graphic
schemes to the bombing news, even before the blood, bones and flesh had been
cleaned up from the Paris streets. By mid-afternoon, life returned to normally
scheduled programming. “Flip or Flop” threatened to lure me in before I
switched off the television for good.
In times of great stress, I, like many of us, turn to food,
music and writing as ways of seeking comfort and company, particularly when I
can’t find meaning to my grief. Finding comfort in food is familiar ground.
After 9/11, I canned and preserved, cooked and cleaned in my kitchen, and I
organized my home in a way to try to hold onto it forever, to want it never to
change.
Comfort food varies in my household. My husband Carl loves
warm chocolate chip cookies. Carly will spread a layer of peanut butter onto
thick buttered toast. My youngest daughter Mandy and I share a love for ramen
noodles. Anything from my children’s childhood will invoke a comfort response;
Russian salmon pie, cardamom and sour cream salmon spread, rhubarb chutney. I’m
sure you have heard of the most famous, or at least the most cited, food memory
by Marcel Proust from his book “In Search of Lost Time”. Here is the quotation
in its entirety:
“No sooner had the warm liquid mixed with the crumbs touched
my palate than a shudder ran through me and I stopped, intent upon the
extraordinary thing that was happening to me. An exquisite pleasure had invaded
my senses, something isolated, detached, with no suggestion of its origin. And
at once the vicissitudes of life had become indifferent to me, its disasters
innocuous, its brevity illusory – this new sensation having had on me the
effect that love has of filling me with a precious essence, or rather this
essence was not in me it was me. … Whence did it come? What did it mean? How
could I seize and apprehend it? … And suddenly the memory revealed itself.
The taste was that of the little piece of madeleine which on Sunday mornings at
Combray (because on those mornings I did not go out before mass), when I went
to say good morning to her in her bedroom, my aunt Léonie used to give me,
dipping it first in her own cup of tea or tisane. The sight of the little
madeleine had recalled nothing to my mind before I tasted it. And all from my
cup of tea.”
Music can change the tempo of that running narrative in my
head. A few years ago I took a class on how different music influenced our
writing. We wrote similar exercises while listening to different styles of
music. Here’s a highly personalized music playlist that is particularly calming
and good for out-of-the-head writing. There are a couple of songs here with
understandable lyrics but for the most part, I prefer music with either non-intelligible
words or no words at all so they don’t bump into the creative process. You can
go online and listen to any of these. I recommend a good pair of
noise-cancelling headphones to use when writing – or, maybe to use when the
news of the world is too bad to bear. I ask that you listen to Jubilee by
Alison Krauss. The lyrics are particularly captivating.
1     Tribute To Bunting – The Chieftains
2     Concerto R.580, In B Minor For 4 Guitars – Academy Of St.
Martin In The Field
3     Five Variants of ‘Dives and Lazarus’ – Academy Of St.
Martin In The Field
4     Vocalise Op.34 No.14 – Adiemus
5     Chorale VI + Cantus-Song of Aeolus- Adiemus
6     The Prayer Cycle: Mercy -Alanis Morrisette & Jonathan
Elias
7     Jubilee – Alison Krauss
8     Padmakara – Chöying Drolma & Steve Tibbetts
9     Nessun Dorma – Amici Forever & Budapest Film Orchestra
10   Ong Namo – Snatam Kaur
11   The Flower Duet – Charlotte Church
12   Samba Sadashiva – Donna De Lory
And, every day that we write, we exercise our right to free
speech. We align ourselves on the side of the soaring human spirit that won’t
be contained by those who blow up others. I close with a piece by poet Adrienne
Rich that speaks to conflict. I promise, next week I’ll write that blog on
culinary writing.
In Those Years
In those years, people will say, we lost track
of the meaning of we, of you
we found ourselves
reduced to I
and the whole thing became
silly, ironic, terrible:
we were trying to live a personal life
and yes, that was the only life
we could bear witness to
But the great dark birds of history screamed and plunged
into our personal weather
They were headed somewhere else but their beaks and pinions
drove
along the shore, through the rags of fog
where we stood, saying I

Kirsten Dixon owns two remote wilderness lodges in Alaska. She is the author of The Winterlake Lodge Cookbook: Culinary Adventures in the Wilderness and co-author of the Tutka Bay Lodge Cookbook: Coastal Cuisine from the Wilds of Alaska. She co-owns the La Baleine Café with her daughter Mandy. She likes to know what other people are reading and uses every opportunity to find out. Her email is Kirsten@withinthewild.com.

1 thought on “Kirsten Dixon: In These Years”